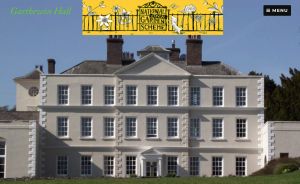 Garthewin Hall and Garden
A cluster of historic buildings surround an early 17th century house in a picturesque rural setting near Conwy. Around the house is an 8-acre 18th century pleasure garden, created around 1710, then updated from 1767-72.

Part of an earlier 17th century garden design remains. The informal pleasure gardens are laid out in a lovely valley setting and feature a terrace and a scenic walk to a banqueting house. The pleasure gardens were laid out at the same time as the house, with additional planting in the 19th century, and include lush displays of azaleas and, rhododendrons, in a design dotted with ponds. To the south-west of the house is a walled garden with a fish pond, and beyond the pond is a dovecote.

The path to the walled garden is planted with yew and rhododendrons, and bounded by a stream on the west. Halfway down the slope of the garden space are 19th century glasshouses and cold frames. Beyond the gardens is a landscape park planted with clustered oak and Scots pine.

The roots of Garthewin go back to at least the 17th century, when Robert Wynne married the heiress to the estate. Wynne was a Royalist commander in the Civil War, but could trace his ancestry back to the 9th century leader Marchudd ap Cynon, who founded the eighth of the Noble Tribes of Wales. Around 1710 Dr Robert Wynne, Chancellor of St Asaph, rebuilt the 17th century house.

Another Robert Wynne, High Sheriff of Denbighshire, altered this early 18th century building. The house we see today at Garthewin dates to 1767 and was designed by architect Joseph Turner of Chester, who created an elegant 9 bay house of stucco, with a neoclassical pediment spanning 3 bays. The interiors feature marble fireplaces and excellent panelling and plasterwork details in the style of Robert Adam.

In 1870 a tower was added to make space for a ballroom, and in the 1930s architect Clough Williams-Ellis of Portmeirion fame remodelled the house further. He also added a garden terrace to the south front.

There are several historic listed buildings on the site. The Garthewin house itself is listed Grade II*, and just west of the house is a Grade II listed chapel, with listed outbuildings, and The Book Room house on the main drive to Garthewin is also listed Grade II.

Both house and garden are open to groups by appointment and the garden is often open for the National Garden Scheme. There is also public footpath just west of the property, though this will only give an overview of the site, but may allow you to see how the historic parkland was laid out.

More self catering near Garthewin Hall and Garden >>

More bed and breakfasts near Garthewin Hall and Garden >>