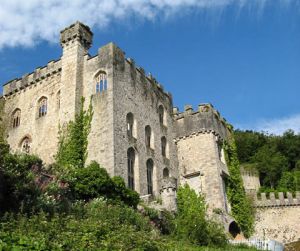 Gwrych Castle
Gwrych Castle is a Victorian Gothic fantasy, now being restored after years of neglect. The castle was built by a wealthy industrialist as a monument to his ancestors. The parkland features mock-medieval towers and terraced gardens.
History
This Victorian Gothic castle was constructed from 1812 for Lloyd Hesketh Bamford-Hesketh as a grandiose memorial too his ancestors, the Lloyds of Gwrych. But the 19th century castle was simple the latest in a succession of castles on the site.

The first castle was a timber fortress built by the Normans in the 12th century. In 1170 Rhys ap Gruffydd of Deheubarth captured Gwrych and rebuilt it in stone. The Welsh castle survived until it was destroyed by Oliver Cromwell's Parliamentary army after the Civil War.

The 19th century castle was a monument to the wealth of Lloyd Hesketh, with 128 rooms, including 8 bedrooms, and 19 embattled towers giving it the air of a fairy tale fortress set on a sloping hillside.

The castle was extended several times during the 19th century, and a chapel was added in the 1870s. At the same time the grounds were landscaped and developed into a sweeping garden, with highlights including carefully arranged monkey puzzle trees.

The castle passed by inheritance to the Dundonald family, who called in the Arts and Crafts architect Detmar Blow to design an Italianate marble staircase, rising 52 steps high.

When the last of the family, Winifred Cochrane, Countess of Dundonald, died in 1924 she left the castle to George V and the Prince of Wales, later Edward VIII. Unfortunately for the Duchess's plans, the bequest was turned down, and the castle was given to the St John of Jerusalem charity.

Then in 1928 the 12th Earl of Dundonald bought the castle, though he had to sell the contents in order to defray the purchase cost.

During WWII the castle was used to house Jewish refugees. After the war it was opened as a tourist attraction and events venue, including a popular medieval re-enactment fair. So popular was Gwrych to visitors that it was called 'The Showplace of Wales'. Almost 10 million visitors climbed the marble staircase in the 2 decades following WWII, but the castle finally closed in 1985. It stood empty for several years, and as a result was badly vandalised and used by squatters. Even in its derelict state Gwrych was used as the setting for the 1996 film 'Prince Valiant', starring Edward Fox and Joanna Lumley.

A development company, acting with a local preservation group, launched a scheme to convert the castle into a luxury hotel. The plan collapsed when the company went into administration.

Good News at Last
In 2010 a new developer stepped forward, with plans to create a luxury hotel. The Gwrych Castle Preservation Trust has begun to restore the castle, with plans to create a visitor centre, with exhibits telling the history of the castle and display archives documenting the people connected to Gwrych and its estate, along with objects of historic importance. Please see the Trust website for current details on the restoration progress and visiting opportunities.

More self catering near Gwrych Castle >> 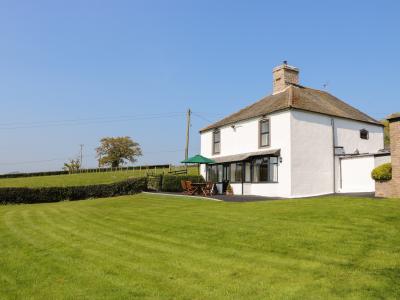 A bright, detached farmhouse in Dolwen, five miles from Abergele, with three bedrooms accommodating up to six people.
Sleeps 6 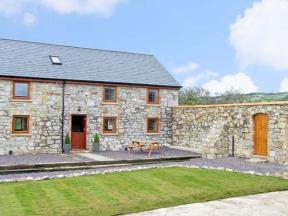 Sleeping five people in three bedrooms, this cottage is on a working farm 3 miles from Abergele, 2 miles from the North Wales coastline.
Sleeps 5