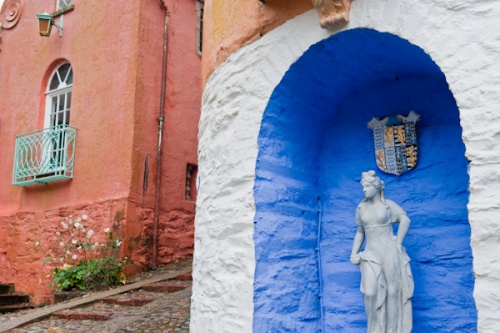 A combination of fantasy village and extraordinary gardens, Portmeirion is the work of Sir Bertram Clough Williams-Ellis, a Welsh architect. He began building in 1927 on his own private peninsula on the western coastline of Snowdonia, setting it into the architecture of a wooded hillside and beach.

Clough Williams-Ellis wanted to show that 'the development of a naturally beautiful site need not lead to its defilement'. He purchased the Portmeirion site in 1925 for just £20,000. The site was a deserted wilderness, but Clough drew up plans for an entire township.

The astonishing range of buildings was constructed in two phases; from 1925-1939 the site was laid out and distinctive Arts and Crafts buildings erected at key locations around the site. Then from 1954-1976, the remainder of the site was filled in with neo-classical and Palladian buildings to contrast with the earlier style. 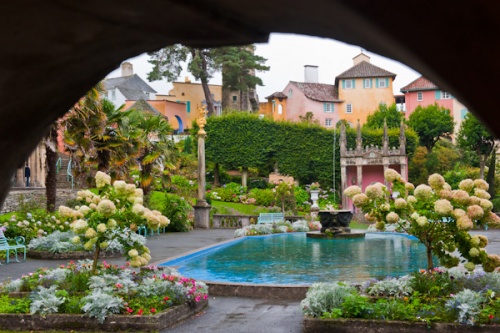 It is difficult to categorize Portmeiron - it is an experience! Clough Williams-Ellis created a fantasy village incorporating elements of Italian and Gothic design set in 85 acres of beautiful woodland gardens overlooking a harbour.

Clough was a fascinating and eccentric character, a tireless campaigner for the preservation of natural heritage, president of the Campaign for the Protection of Rural Wales for 20 years and a founding member of the Council for the Protection of Rural England. He leant his influence to the campaign to establish national parks in England and Wales and actually drew up the boundaries of Snowdonia National Park.

At the centre of the village is the Central Piazza, with a Gothic Pavilion at one end and the Gloriette at the other. Statues of Hercules and the goddess Friga overlook the piazza and add to the Italianate flavour of the scene.

Portmeirion became famous as the setting for the 1960s TV series, The Prisoner, starring Patrick McGoohan. All 17 of the series episodes were filmed in Portmeirion, and viewers of the series will immediately recognise many of the locations. There is an AV presentation on the development of the village, and cottages are rented as holiday homes. The internationally known Portmeirion Pottery, created by Sir Williams-Ellis' daughter, is sold in the village.

The village is surrounded by woodland gardens, with walks along the coastline and through the woods, with towering pines, sycamore, redwoods, and fir trees. There are lush displays in the Edwardian garden, with colourful Rhododendron, Azalea and Camellias in season.

More self catering near Portmeirion >>

More bed and breakfasts near Portmeirion >>