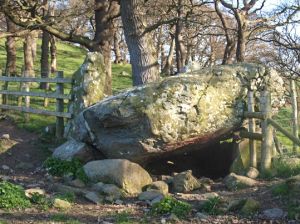 Hendre Waelod Burial Chamber
Hendre Waelod, sometimes known as Allor Moloch, is a Neolithic chambered tomb dating to 3500 BC. The tomb is fronted by portal stones standing 5 feet high, and topped by a massive capstone.
The tomb is of the type known as a portal dolmen, and it stands close to the east bank of the River Conwy, on the edge of a farm field. There is a single inner chamber framed by a pair of portal stones to the south east. The remains of a long cairn which originally covered the chamber can be seen behind the tomb.

The portal stones stand over 5 feet high and have been incorporated into a farm fence. The stones may originally have been much taller, as much as 10 feet high, though the ground level has risen around the tomb due to soil deposits from the sloping hillside.

The portal stones would have formed the original entrance to the chamber, but the partially collapsed capstone now obscures the opening. The capstone is massive; about 10 feet square and over 3 feet thick, and tapering slightly to form a wedge shape.

The name Allor Molloch, sometimes used to describe the site, translates loosely as 'Altar of Molloch', suggesting a religious use, but the name was probably added long after the tomb was built. The surrounding area is full of ancient sites, suggesting that Hendre Waelod could be seen as part of a sacred landscape.

Access to the cairn is easy; several footpaths lead from minor roads nearby, and from the village centre of Llansanffraid Glan Conwy, just across the A470.