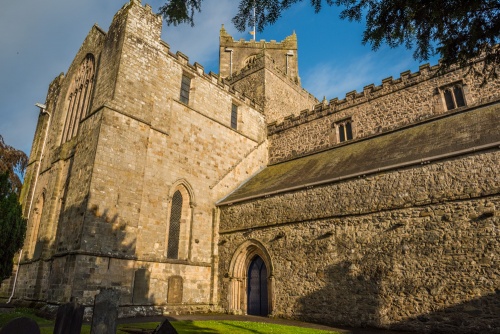 William Marshall, later to become famous as the Earl of Pembroke, founded Cartmel Priory around the year 1188 as a house of Augustinian canons. When he set up the priory, Marshall specified that an altar and a priest be set aside to serve the spiritual needs of the people of Cartmel.

A chapel beside the choir, at the south-east end the church, was set aside for this purpose and was appropriately called the Town Choir. If Marshall had not ordered the chapel to be set aside it is doubtful that the superb church we see today would still exist. More on that in a moment. 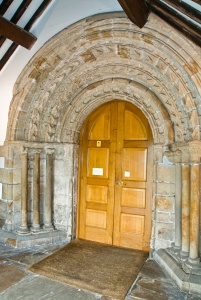 The canons for the new priory came to Cartmel from Bradenstoke in Wiltshire. The priory lasted over 400 years but finally fell at the hand of Henry VIII in his Dissolution of the Monasteries.

It was not a pleasant passing - the king's commissioners took the corn stored in the priory's barns, and when the canons resisted, the king's men seized the canons and hanged four of them and ten husbandmen (lay workers).

King Henry's men took the lead from the roof of the priory church, and the other monastic buildings, but they left the Town Choir untouched, because, they reasoned, it belonged to the townsfolk of Cartmel, not to the priory.

The priory was left to moulder, and it was only in the 17th century that the priory church was repaired, under the auspices of George Preston of Holker. A memorial to the Preston family is set upon the north wall of the north aisle.

The estate of Cartmel later passed to the Cavendish family, the earls of Devonshire, and a memorial to Frederick, son of the seventh Earl, stands in the west end of the north aisle. The unfortunate Frederick was the Chief Secretary for Ireland in William Gladstone's government and was murdered by extremists in Dublin in 1882.

The church is composed of a nave, north and south aisles, north and south transepts, and two small chapels. The earliest part of the church still surviving is the Piper Choir, where the roof vaulting still remains from the original priory church.

In the north wall of the north transept is an arched doorway, which served as a door to the Night Stairs whereby the canons came from their quarters to night services in the church. 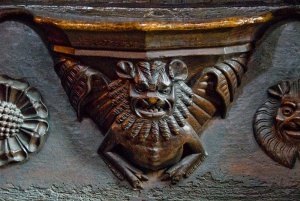 A medieval misericord in the choir

The choir boasts some lovely medieval misericords, including a Green Man, a figure of Alexander the Great, and a variety of beasts and carved foliage. You will note that several of the poppy head ornaments on the choir stalls are damaged; this is a legacy of the Dissolution, when Henry VIII's men stripped the lead from the roof above, and debris fell on the choir.

On the south side of the sanctuary is the finest medieval tomb in the Priory, the ornate memorial to Sir John Harrington and his wife Joan. Nearby is an old font, believed to date to the early 1200s. It is topped by a lovely 17th century painted font cover.

An interesting historical note in the church brochure says that fonts were often covered in the belief that doing so would prevent witches from stealing holy water and using it for their spells.

In the south transept is a display of historical artefacts, and on the wall is a framed royal charter of 1641, signed by Charles I, in which the monarch granted land formerly part of the priory estates to seven local landowners. A royal seal and two ducal seals are attached to the charter.

There are several interesting points to note about the exterior of the priory; the 14th-century bell tower for one. It is turned at a diagonal angle to the main tower beneath it. This is thought to be the only example in England of a bell tower placed diagonally to the church beneath it. The south door, by which you enter the church is worth a glance; It was built around 1200.

Just to the west of the south porch is another, smaller door. This is known locally as The Cromwell Door. If you look closely you can see that the surface of the wooden door is pock-marked with circular holes. These were made by musket balls fired by angry townsfolk when Cromwell's men stabled their horses in the nave of the priory church during the Civil War.

It is well worth your time to wander about Cartmel; it is a very pretty town, though it can be crowded in summer. Near the priory is the old Priory Gatehouse, at one time the main entrance to the Priory precinct. It is now in the care of the National Trust, though, sadly, no longer open to the public. 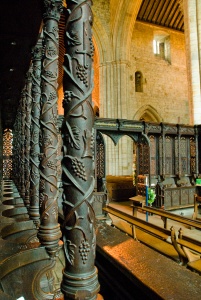 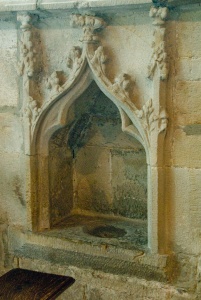 A medieval piscina in the
south sanctuary 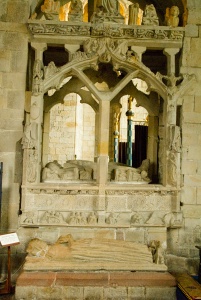 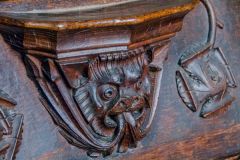 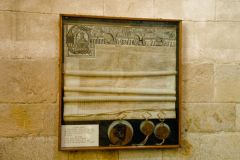 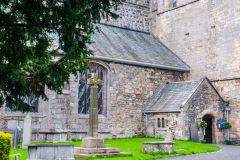 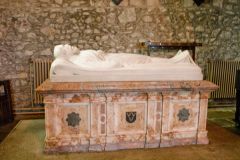 More self catering near Cartmel Priory

Self Catering near Cartmel