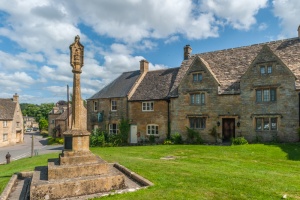 So much of the distinctive character of Cotswold towns and villages are defined by the local building stone, unimaginatively called "Cotswold stone". This limestone has been variously referred to as "honey-coloured", "warm-toned", and by the truly adjective-challenged travel writer, "charming". It is all three.

The Cotswold hills were formed in the Jurassic period, and are but a part of a great ridge of Jurassic stone which sweeps up from the Dorset coast and peters out far off in the North York Moors. The western slope of this Jurassic Ridge is composed largely of shale, clay, and lias limestone.

To the east, the Jurassic ridge is largely oolitic limestone, and it is this distinctive, hardwearing stone that gives the local buildings their distinctive "Cotswold look".

In truth there are several local varieties of Cotswold stone, all possessing slightly different colouring, but all blessed with similar useful attributes of being easily worked and carved, then hardening and lasting for centuries.

If we can characterize the landscape of the Cotswolds briefly - always a dangerous exercise, but in the interests of simplicity I'll do it anyway - the area is composed of windswept upland offering panoramic views, and sheltered valleys with tiny hamlets and villages dotted in the folds of the land amid pastures separated by low stone walls.

The pastures are worth noting, for this was traditionally a sheep-raising region, and indeed it is the sheep that we have to thank for many of the smugly prosperous villages and the lovely churches that adorn them.