Self Catering in East Sussex - Rye 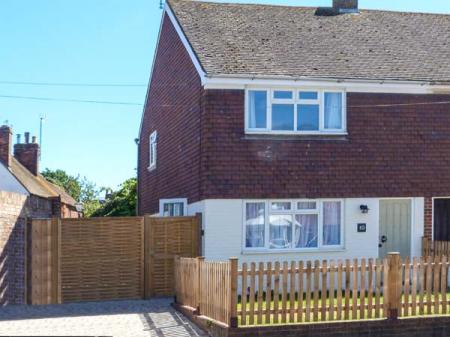 This semi-detached cottage is in the heart of Rye and sleeps four people in two bedrooms.

Sunnyside is a semi-detached cottage in the heart of Rye in Sussex. The cottage sleeps four people in two bedrooms which are a super king-size double which can be a twin on request and a king-size double room. There is also a shower room and an open plan living area with a kitchen, dining area and sitting area.

Outside, there is off road parking for one car and a front and side lawned garden with a patio and furniture. After a long day of exploring and adventures return to the welcome of Sunnyside, relax in the garden as the last rays of the day go down and reflect on the day's pleasure in this perfect part of Sussex.

This was an appalling experience of Sykes Cottages.
There was a bucket of what appeared to be mud outside the back door on our arrival on the Friday evening, and the side path was also covered in dirt. We noticed an unpleasant aroma which increased and was undeniably sewage. Three days later, on Tuesday morning, a man with a drain cleaning van knocked on the door, and said he had come to deal with a sewer blockage. Despite already having had two conversations with the local contact person by this time, we had not been informed of this problem (although he had said that someone was coming to address a problem with the bath - something the cottage does not have). The drain man unblocked the sewer; it took several washes for him to clear most of what was in fact the remnants of sewage dirt from the path. While the cottage is referred to as Sunnyside, no external sign was visible saying Sunnyside - only the house number 10. We gathered from the drain man that another drain clearing company had not turned up: it may well be that they couldn't find the property. While the actual kitchen equipment is good, the attitude to utensils and supplies appears extremely mean and at best careless. The glass spout to the cafeti?re was broken and jagged: despite notification to the local contact person on Saturday and an initial promise that a replacement would arrive on Monday, no replacement was forthcoming by the time we left the following Friday. The utensils supplied do not include for example a chopping board, a potato peeler, an oven glove, a bread knife or indeed any sharp knife. This was notified to the local contact person and nothing was done - and on our third call he was unhelpful and rude. On discussing this with the Sykes Cottage customer services line, we were told that a potato peeler is not required equipment. There was no kitchen hand towel and the two tea towels were small and thin. There was just one toilet roll provided and no dishwasher tablets. The folder of manuals and instructions did not contain the manual for the cooker, although fortunately we were able to find it on the Internet. There is no battery in the bedroom smoke alarm. We could not see a fire extinguisher or fire blanket anywhere. The cottage instructions do not say what to do with recycling. The local contact person told us to use the green bin in the garden - there isn't one. When this was pointed out, he said to put it in a black sack in the rubbish bin for him to deal with... We wholeheartedly agree with the previous reviews that say that the two settees are extremely uncomfortable (although we had seen these reviews in advance and booked anyway). While writing this review, we have rechecked the cottage listing, and observe that reviews posted since we booked show that the sewage problem has been known for over a month. This was an unacceptable health hazard and suggests indifference, incompetence or worse. If Sykes Cottages want to retain their reputation, they should remove this property from its listings.
Andrew E
2019-07-07

Noisy stay
The cottage on first look is lovely. Cleanliness was great, nothing to complain about. It was booked as 2 king beds but unfortunately was only one king and 2 single beds. So a note if booking to make sure you confirm what you want with the owner. The downside was the noise! I was woken hourly by passing traffic and pub leavers. If I had to stay here for a week I would?ve left and tried to find somewhere else. I would not recommend this cottage if you want to sleep without being woken.
Coastal55225867830
2018-11-29

No Privacy and Traffic Noise from road and Pub
Clear glass in Bathroom window so had to keep the blind down and closed all of our stay, room looked out onto Carpark. Pub played loud,live music Friday and Saturday evening! No curtains or blinds in the lounge area so when the lights were on it felt like being in a goldfish bowl. Kitchen window looked onto fence which was about 2ft away. Traffic noise bad with Sunnyside being located on a main road.
Harbinder G
2017-05-29

Road noise very bad
The cottage was in Rye. We weren't impressed with the town. The cottage was very nice inside, but the road first thing in the morning was extremely bad and you could feel the vibration of the lorries and buses sometimes, it became a bit better during the day. Would not stay again!
dianehefferan
2017-05-12

Get an Ordnance Survey map covering the Rye area.