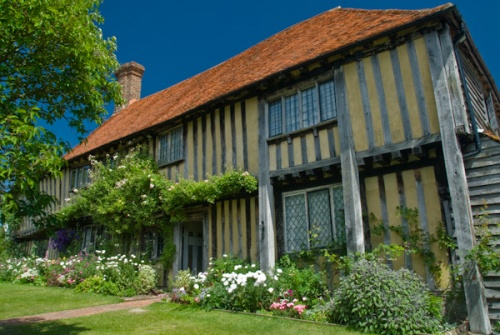 A lovely 16th-century half-timbered house once owned by actress Ellen Terry. The interiors showcase Terry memorabilia and historic theatre costumes. A thatched theatre is located in the grounds.

Smallhythe was built sometime shortly after 1514, probably as a Port House or Harbour Master's offices for the shipyard nearby. The house is a beautiful timber-framed building with a tiled roof. It is two stories high, with crown-post construction.

It was already three hundred years old by the time its most famous owner, actress Ellen Terry bought the property. Terry first saw Smallhythe in 1890, but it was not for sale, and she had to wait until 1899 before she could purchase it.

Ellen Terry was one of the most famous actresses of the age before films and television. She was probably comparable in terms of popularity with a modern Holywood film star. She was nicknamed 'The Queen of the Theatre', a tribute to her compelling stage presence. She did not inspire only theatre audiences; author Oscar Wilde wrote no less than three sonnets for her.

She travelled widely and used Smallhythe as a peaceful refuge from the rigours of her professional life.

After Terry's death in 1928 a thatched barn in the garden was converted into a theatre. The Barn Theatre is now a public venue for the performing arts and hosts regular stage performances.

Surrounding the house and thatched theatre is an informal cottage garden and grounds containing an orchard, a small nuttery, and a rose garden.

The interior of Smallhythe is a delight; a half-timbered relic with undulating floors and wonderful period rooms. Almost the entire interior is filled with Ellen Terry memorabilia, from letters, diaries, newspaper clippings, to personal effects and an extensive exhibition covering her theatrical career, including many of her collaborative roles with her frequent partner Henry Irving.

Terry and Irving headlined theatrical events at the Lyceum in London for 20 consecutive years, alternating performances of Shakespeare with melodramatic roles. Memorabilia from that long collaboration is on display, as are posters, portraits of Terry in some of her most famous roles, and gifts from her many famous admirers.

Chief among the treasures on display are famous costumes worn by Terry for live performances. Among these is a costume designed by Laurence Alma-Tadema for her role as Imogen in Shakespeare's Cymbeline, and another designed by Pre-Raphaelite stalwart Edward Burne-Jones for her role as Guinevere in King Arthur.

The most famous costume, however, is a beetle shell gown created for her role as Lady Macbeth. This glittering green costume was made famous in a painting of Terry by artist John Singer Sargent.

The gown is 13th century in style, of green silk and tinsel, and sewn with real beetle wings to create an iridescent shimmer when she moved. Oscar Wilde commented that 'Lady Macbeth ... evidently patronises local industries for her husband's clothes and the servant's liveries, but she takes care to do all her own shopping in Byzantium'.

NB As of this writing the original green beetle gown has been removed from display while it undergoes restoration. A copy is on display in its stead.

Smallhythe is a delightful Elizabethan house in a lovely rural setting. It would be well worth a visit even without its association with Ellen Terry, but the added interest provided by the displays on Terry's life and career makes this a really excellent place to visit.

More self catering near Smallhythe Place >>