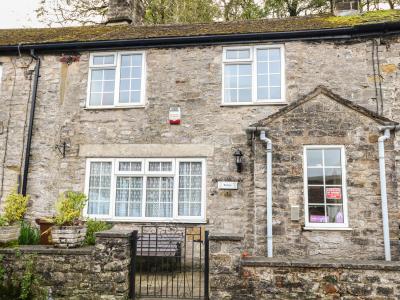 This mid-terrace cottage is in the village of Castleton near to Buxton and can sleep four people in two bedrooms.

Eastry Cottage is a lovely mid-terrace cottage situated in the village of Castleton just ten miles from Buxton in the Peak District. The cottage sleeps four people in one double bedroom and one twin bedroom together with a family bathroom. Also in the cottage is a kitchen, and a sitting area with dining area and gas fire.

Outside is roadside parking for one car and front and rear patios with furniture. Eastry Cottage is a delightful cottage to use as a base for exploring this lovely part of the country.

Lovely Cosy Cottage
We stayed in Eastry Cottage 25 May - 1 June, there were three of us, me, my husband and 9 year old daughter. We arrived very late on the Friday night after driving up after work. We were greeted by a warm, well lit cottage which was much appreciated after the the long drive. The owner had left some milk and eggs in the fridge for us also. The cottage was very clean with fresh flowers in the living room which was a nice little touch. The living room was cosy with comfortable sofa, smart tv with freeview so was nice to relax in the evening after our all day country walks. The beds were also extremely comfortable, something I usually have problems with due to a bad back, but the mattresses were firm. We were very lucky with the weather so took advantage of the small patio area with a glass of wine a couple of evenings with the stunning view of Mam Tor in the distance. We met the owner on our departure and she was very lovely. As a family we have been to Castleton many times before and all in all this is one of the best places we have stayed. We will certainly stay here again for a week's holiday.
Amanda R
2018-06-04

Worst Holiday Ever
We stayed at Eastry Cottage, Castleton from December 15th 2017 to December 18th 2017. We were due to stay until the 22nd December but had to move part way through. The cottage was damp, mouldy and very very cold. This was apparent as soon as we entered and we quickly became aware the heating control was locked away out of reach. I am not surprised their have been previous complaints and the owner response to one saying that they had decided to allow clients access to heating at anytime I believe was only made (December 19th) after we contacted both the owner AND Sykes cottages to get help. Bearing in mind it was minus 2 inside and out on the first night. The owner was unhelpful and downright rude and that alongside the fact that our Christmas break had already been ruined by the owners attitude, the cold, the damp and subsequently becoming ill we took the decision to move to salvage some of the holiday at great expense. To be fair. On returning home, the owner gave us a partial refund (we had photos of the damp etc to send to Sykes cottages) of ?93. Given that it cost another £250 for accommodation to salvage the holiday we still are unhappy. Sykes Cottages however, refunded our booking fee's AND provided a voucher for us. The end result in our opinion being that Sykes were more helpful and accommodating than the rude owner of Eastry Cottage. We love Castleton, stayed there four times alone last year. It was the worst experience we have ever had.
G378KBjuliep
2018-01-14

Lovely period cottage
We stayed at Eastry Cottage on a recent visit to Castleton. The property is a character cottage in a great location. When we stayed the weather was awful however the cottage was very warm and cosy at all times. The lounge has clearly had some new furnishings which made it seem very homely and the whole property was very comfortable. Great value for money, and would definitely stay again. The fresh milk, eggs and lovely bunch of flowers on arrival was also a very nice touch.
ManchesterRoo
2017-11-10

Cold, very damp, mostly dated with old kitchen
We arrived on August 18th which was a cold, wet day. On entering the cottage there was an overwhelming damp smell. It was cold in every room, particularly the kitchen and bathroom floors. We put on the gas fire but it did not make any difference. The next day I called the number for the owners, there was no reply so I left a message asking them to turn on the central heating as we could not access it. We then went out and when we returned a note had been left saying that the heating had been put on 7 to 9 am and then 5 to 10 pm to take the chill off. I phoned again and left another message explaining that we had 2 young children with us (3 and 5) and they were in bed long before 10 so could she change the evening time to something earlier. I never got a reply and the heating was not changed. The carpet on the stairs was very old and dusty, there was rust on the towel rail and mirror in the bathroom. Washing up was difficult because the hot water in the kitchen would run cold after a couple of mins so I had to boil kettles and the kettle was so old it took ages to boil. The last PAT test on it was dated 2010! The children developed coughs and we left a day early.
John H
2017-08-26

Details
Gas central heating with gas fire
Electric oven and hob, microwave, fridge/freezer, washing machine, TV with Freeview, DVD, WiFi, selection of books, games and DVDs
Fuel and power inc in rent
Bed linen and towels inc in rent
Travel cot and highchair
Roadside parking at front of property for 1 car on first come, first served basis
Front patio with furniture and rear raised patio with furniture
Sorry, no pets and no smoking
Shop and pub 3 mins walk
Note: There are galvanised steel steps up to the rear raised patio, care should be taken and children supervised
Note: Restricted headroom on entry into twin bedroom
Note: No bike storage facilities at property so will need to leave bikes in front garden

Get an Ordnance Survey map covering the Castleton area.