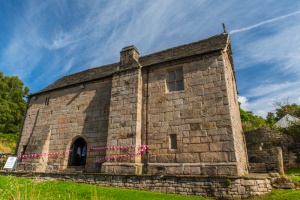 The 15th-century gatehouse and chapel of Padley Manor stand in a secluded rural site near Grindleford. Behind the Chapel are the ruins of the 14th-century manor house, now no more than foundation walls. The Chapel is best known for its association with a pair of Catholic priests captured here in 1588 and later executed for high treason.

During the 1580s it was a High Treason for an ordained priest to be in England, and anyone caught harbouring such a priest might be put to death. Recusants - people who refused to accept Elizabeth I as head of the church in England - were heavily persecuted. It was in this climate of fear and suspicion that the events at Padley Manor unfolded in 1588.

On 12 July 1588 Robert Ludlam and Nicholas Garlick were arrested at Padley Manor, where they were visiting the owner, John Fitzherbert. It was more a matter of bad luck that the pair were found at Padley; they were only staying one night. The authorities, led by the Earl of Shrewsbury, probably did not know the priests were at Padley, but were after John Fitzherbert for his recusant attitudes. 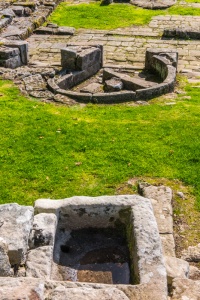 Manor house ruins
behind the chapel

The Padley family must have had warning of the authorities approach, for they buried the altar stone in the garden. It was uncovered in 1934 and reinstated in what would have been the family chapel.

The pair were taken to Derby Gaol and charged with having entered England as Catholic priests. Garlick spoke for both the arrested men, and it seems that his bold and forthright attitude did not sit well with his questioners.

The two men were sentenced to treason on 23 July and executed the following day on St Mary's Bridge in Derby. A long-standing tradition suggests that Garlick's head was buried in the churchyard at Tideswell. In 1987 Garlick and Ludlam were beatified by the Catholic church.

When the 2 prisoners were being transported from Padley to Derby, they passed through the village of Eyam, where they were verbally abused by the villagers. One or both of the men made a remark which was later construed as predicting the devastation of the Plague in the little Peak District village. In 1665 the Plague came to Eyam, but the villagers, under the leadership of their rector, quarantined themselves to prevent the spread of the disease to nearby villages.

You will see the buildings at Padley referred to by several different names, including Padley Chapel, Manor, and Manor Hall. All are accurate, for the site has been called each of these over its long history. 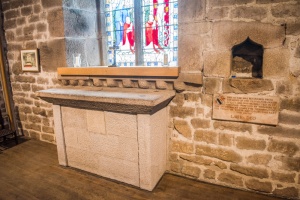 There was almost certainly a manor house here before the Norman Conquest, though nothing remains of that first building. William the Conqueror gave the Padley estate to one of his followers, the head of the De Bernac family. The Bernac's changed their family name to Padley after their estate. Ruins to the west of the Padley site show where the family extended the existing hall house.

The Padley family held the manor for over 350 years, and extended the original hall house to create a medieval manor around 1350. The male line died out in the early 15th century, and the last Padley was a young woman named Joan, who married Robert Eyre. The couple settled at Padley and extended the manor house with the addition of the very fine gatehouse we see today. The gatehouse was a status symbol, an indication of their wealth and influence.,/p>

The male line of the Eyre family died out after 4 generations, just like the Padleys before them, and Anne Eyre married Sir Thomas Fitzherbert in 1534. Sir Thomas gave Padley to his younger bother John. Both Fitzherberts were staunch Catholics. Thomas spent 32 years in prison for his beliefs, dying in 1591, a year after his brother, who also died in prison.

The entire household at Padley Manor was arrested with the 2 Catholic priests. The manor was seized and passed through several owners before returning to Fitzherbert hands. In 1649 William Fitzherbert inherited Padley, but he was not long to enjoy his inheritance. Heavy fines for recusancy combined with family debts, forced William to sell Padley once more. 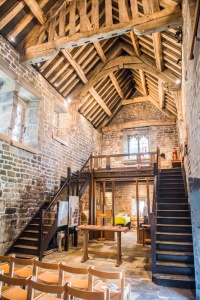 It seems that the house was never lived in after this point. All but the gatehouse was pulled down and the stone sold for building material. The formerly grand gatehouse was used as a hay barn and cow byre.

Things changed in 1892 with the first Pilgrimage to Padley. The Pilgrimage has become an annual event, and proved very popular. In 1931 the gatehouse and some adjoining property was purchased by the Diocese of Nottingham. The chapel was restored and consecrated as a chapel.

It is open regularly during the summer months and for heritage open days. Even when the chapel is not open you can still explore the exterior and the ruins of the manor house beyond. It's a fascinating historic building; the interior is like a large hall, with a ladder leading to a loft, or gallery, at one end.

In the loft is the original stone altar, found buried in the garden and now forming the centrepiece of the newly consecrated chapel. Near the altar are stained glass windows commemorating members of the Fitzherbert family, who suffered so much under Catholic recusancy laws.

From the gallery you can get a good look at some of the beautifully preserved wooden angel figures that support the timber roof. On the far wall, opposite the main entrance to the Chapel, is a large window with glass panels depicting the capture and subsequent execution of Nicholas Garlick and Robert Ludlam. 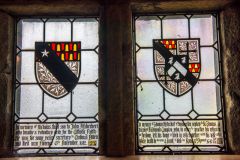 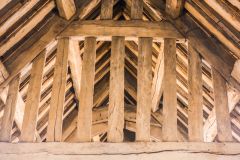 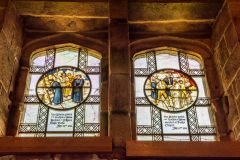 More self catering near Padley Chapel