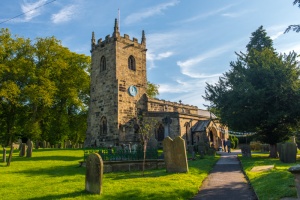 St Lawrence's church stands in the centre of the 'Plague Village' of Eyam, and boasts a Saxon churchyard cross, a Norman font, and a series of 18th-century wall paintings.

Eyam and the Plague

The church is best known for its connection to the outbreak of plague in 1665, and is sometimes referred to as 'the plague church'. When the plague broke out in London, the people of Eyam must have felt safe. However, a load of cloth sent to a local tailor brought the plague germs to Eyam, and within days the first deaths began.

The local rector, a man named William Mompesson, convinced the villagers to quarantine themselves from the outside world and let the plague run its course, preventing the spread of the disease to nearby villages.

The sacrifice made by the people of Eyam is commemorated by a modern stained glass window telling the story of Rev. Mompesson and his flock. 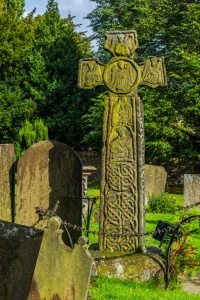 As for the building itself, St Lawrence's dates to the 13th century, though the presence of a late Saxon font suggests there was a much earlier church on the same site.

In the churchyard stands a striking Saxon cross in Mercian style, about 8 feet high. It was originally as much as 10 feet tall, but has lost a section of the cross shaft.

The cross dates to the late 8th or early 9th century and originally stood at Cross Low, west of Eyam, where it probably served as a wayside preaching cross. It was discovered beside an ancient trackway during the 18th century, dug up, and erected in the churchyard at Eyam. It is only Saxon cross in the Midlands that retains its cross-head.

The cross is beautifully carved with intricate interlace patterns on the shaft, with scrollwork and foliage, and figures depicting Christ, the Virgin Mary, and angels are carved on panels on the shaft and cross-head. It truly is a remarkable piece of pre-Norman art, and deserves a visit in its own right.

Very close to the cross is the altar tomb of Catherine Mompesson, wife of Rev. Mompesson. She chose to stay with her husband in Eyam, and helped him minister to the plague victims and their families throughout the crisis. Unfortunately, she too died before the plague had run its course.

Set onto the south wall of the chancel near Catherine Mompesson's tomb is an intriguing 1775 sundial, inscribed with not just the hours but the months, days, signs of the zodiac, and pointers to other locations as diverse as Mecca, Tenerife, and Quebec.

Despite all the historic features, a lot of people come to the church to see the modern stained glass 'Plague Window', with colourful panels telling the story of Rev. Mompesson and the plague in Eyam. The story starts in the lower left panel with the delivery of the fatal package of cloth from London. Above this is a 'ring of roses', a reminder that the nursery rhyme had a deadly origin. 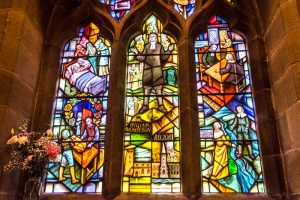 Over the ring of roses is the deathbed scene of the poor tailor, the first Eyam native to die. The next panel shows the meeting between William Mompesson and Thomas Stanley, rector before Mompesson, where the 2 men decided on the courageous step of quarantining the entire village.

At the top of the window are small quatrefoils with other local scenes, including Mompesson Well, where people from neighbouring villagers left goods for natives of Eyam to purchase. The window is extremely vivid, and tells the tragic and heroic tale of Eyam beautifully. 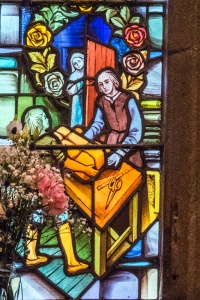 The infected cloth
arriving in Eyam 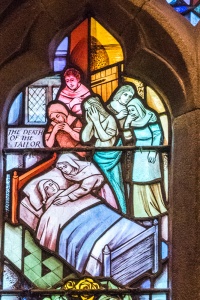 The death of the tailor -
the first plague victim 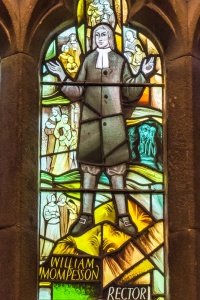 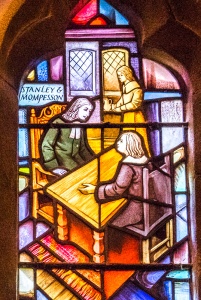 Stanley and Mompesson
planning the quarantine 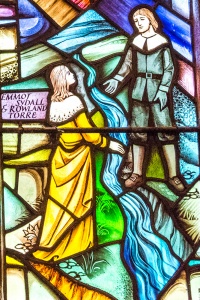 The two lovers separated
by the quarantine

One unusual interior feature is a Bronze Age burial urn, dated to around 1500 BC, found on Eyam Moor. The font is late Saxon or early Norman, with blind arcading around a simple tub atop a pyramidal base.

The wall paintings are striking, with large amounts of colour still; clinging. At the centre of the west wall is a very large skeleton figure, a reminder of mortality. Next to the high altar is the Mompesson Chair, dated 1665 and used by Rev. Mompesson during his tenure.

Unfortunately, I couldn't get close to the chair, as the entire chancel was blocked off to visitors. It seems a bit unfriendly, but I gather that the church has had several episodes of burglars stealing lead off the roof, so I can understand it they're a bit over-cautious with visitors.

Do take the time to follow a trail just beside the village green to the open-air church where Rev. Mompesson would preach to his parishioners when most were afraid to gather together in the church. 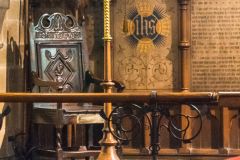 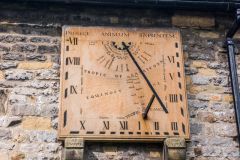 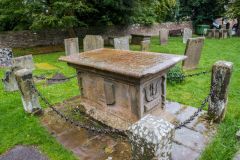 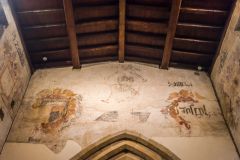 Self Catering near Eyam