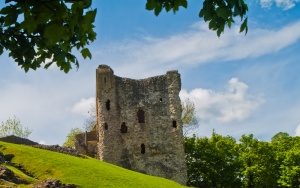 The dramatic ruins of Peveril Castle perch on a high hill above the village of Castleton. The stronghold, formerly known as Peak Castle, was built by William Peveril around 1080. Peveril, who is thought to be the illegitimate son of William the Conqueror, created a wooden fortress, which was soon after converted to stone. It seems that William's son, also called William, angered Henry I, for that monarch confiscated the Peveril estates at Castleton, including the castle.

Henry visited Peveril on several occasions, and the castle was the scene for his meeting with King Malcolm of Scotland in 1157. The castle gradually fell into disuse after the medieval period, and by the 17th century only the keep was in use - as a courthouse! Finally the buildings were abandoned altogether until they were restored in the 20th century.

The castle is approached by a steep climb from Castleton village, through a 12th-century gatehouse piercing a curtain wall. The wall incorporates Roman tiles probably scavenged from the nearby Roman fort at Brough.

The impressive square keep, built by Henry II in 1176, dominates the hilltop, and the original gritstone facing remains on two sides. The foundations of the hall and domestic buildings can be seen, but the prime reason for venturing the climb is the superb view across the surrounding countryside. 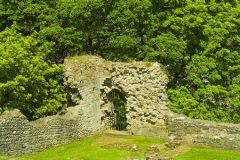 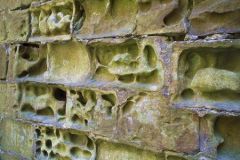 More self catering near Peveril

More bed and breakfasts near Peveril