Tideswell, St John the Baptist Church - The Cathedral of the Peak 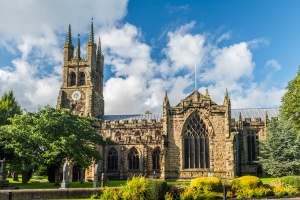 Tideswell's superb 14th-century church is so large and grand that it is popularly known as the Cathedral of the Peak. The first record of a church comes from the late 12th century, but the present church is entirely a product of the years 1320-1400. The relatively short building span means that the church is a remarkably complete example of Gothic style.

The earliest parts - the nave, transepts, and aisles - were begun around 1340 in the Decorated Gothic style of the period. The tower and chancel were added later, near the end of the 14th century, and show the beginnings of the Perpendicular Gothic style, with elaborate pointed arches. It seems likely that the church would have been finished much earlier if not for the devastating effects of the Black Death.

The interior abounds in historic interest. In the south transept is the memorial brass to Robert Lytton (d. 1483) and his wife Isabel (1458). Robert served Henry Vi as the Under-Treasurer of England. also in the south transept is an alabaster tomb of Sir Thurstan de Bower and his wife Margaret, created about 1395. Though worn, the effigies are remarkably complete, and show the couple's costumes in fine detail.

In the opposite (north) transept are a pair of grave slabs to unknown women, both of whom died in the period 1300-1375. 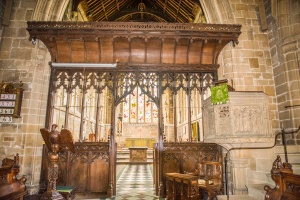 The wooden chancel screen is 14th century, as is the sedilia, or clergy seat, beside the altar. In the centre of the chancel is the elaborate altar tomb of Sir Samson Meverill (d. 1462), who served under the Duke of Bedford in the English campaigns against Joan of Arc in France.

Meverill was an unpleasant man, who, according to legend, kidnapped jurors during a land dispute. Only one of the tomb brasses is original; the others were replaced by replicas after they were stolen in 1688. Beneath the slab is a cadaver; a reminder of mortality.

Set into the chancel floor near the Meverill tomb is a grave slab to John Foljambe (d. 1358). On the slab is a memorial brass, installed by a Foljambe descendant in 1875. The original brass, like the Meverill one, seems to have been stolen in the 17th century, perhaps during the same episode of theft from the church. 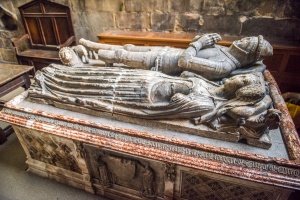 Next to the Foljambe grave is an original 1579 brass to Bishop Robert Purseglove, a native of Tideswell who served under Thomas Cromwell in the Dissolution of the Monasteries. Purseglove became wealthy in the process, and Henry VIII made him a bishop. He held office under Henry and his Protestant son Edward VI, and took the oath renouncing the authority of the pope.

Curiously, he held onto his bishopric under the Catholic Mary I, but when Elizabeth I came to the throne on Mary's death, he refused to swear an oath to her as head of the church. He lost his bishopric and lived out his life in Tideswell, where he gave money to local charities and founded the grammar school.

Tideswell's church is a gem, and is well worth a trip to explore. The church is usually open daylight hours - or even a bit later, as I discovered. I got to Tideswell as the sun was setting, too late to visit the church, I thought. But on a whim, I tried the door and found it open.

I explored the interior at my leisure and was just about to leave when a very friendly churchwarden turned up to lock the door. He not only let me finish photographing, but regaled me with stories about the church, the historic tombs, and the people who were buried here. It really made the building come alive and it was obvious how much pride he took in the church and its history. 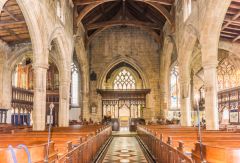 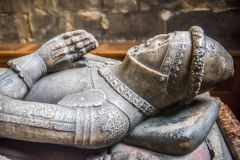 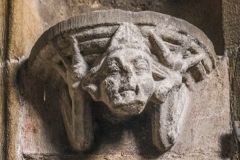 More self catering near Tideswell, St John the Baptist Church

Self Catering near Tideswell