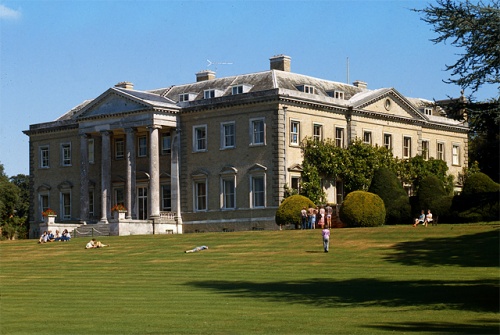 Broadlands is a historic house on the edge of Romsey, Hampshire. It is best known as the former home of the 1st Earl Mountbatten of Burma, and as the honeymoon house used by Princess Elizabeth (later Queen Elizabeth II) and Prince Philip in 1947 and later, by Prince Charles and Princess Diana in 1981.

The history of Broadlands goes back to the Saxon era when the estate was owned by nearby Romsey Abbey. When the abbey was suppressed by Henry VIII at the Reformation, the Broadlands estate was sold to Sir Francis Fleming. The estate passed by marriage to the St Barbe family, who owned it for 117 years.

When Sir John St Barbe died without a male heir in 1723 the property passed to his cousin Humphrey Sydenham. unfortunately, Sydenham lost his fortune when the South Sea Bubble burst, and in 1736 he was forced to sell Broadlands to Henry Temple, the 1st Viscount Palmerston.

Viscount Palmerston began to transform the existing Jacobean house, but his major contribution was to call upon William Kent to transform the formal gardens in favour of a 'gentle descent to the river'.

It was left to the 2nd Viscount Palmerston to create Broadland as we see it today. It 1767 he called in the landscape architect Lancelot 'Capability' Brown to remodel the house and gardens. The architect Henry Holland completed what Brown had begun, turning the earlier Jacobean house into a Palladian mansion.

The most famous resident of Broadlands, however, was Louis Mountbatten, 1st Earl Mountbatten of Burma, a career naval officer and an uncle of Prince Philip, the Duke of Edinburgh. Mountbatten was the Supreme Allied Commander, South East Asia Command from 1943–1946, and served as the last Viceroy of India under British rule and the first Governor-General of India after the country gained its independence.

Mountbatten was assassinated in 1979 by members of the Provisional IRA, who hid a bomb aboard his fishing boat in Mullaghmore, County Sligo, Ireland.

Despite its Palladian appearance, Broadlands is built around Tudor underpinnings. The core of the house is a U-shaped Elizabethan shell, altered over 20 years by Capability Brown and Henry Holland to a symmetrical square design. The walls are of yellowish brick with Portland stone for dressing.

Artwork on show includes paintings by such artists as Anthony Van Dyck, Henry Raeburn, and Sir Joshua Reynolds, along with ceramics by Meissen and Sevres. And then there is the Wedgwood Room, with its blue and white decorative scheme made to resemble a piece of elegant porcelain by Wedgwood.

Throughout the staterooms are superb plasterwork ceilings by Joseph Rose the elder.

While the Wedgwood Room and Drawing Room are very much in Georgian neoclassical style, the Oak Room and staircase reflect the house's Tudor origins.

As of this writing, Broadlands is open for tours during two weeks in August. Please check the official website for dates and times. Tours take in certain rooms on the ground floor of the house but do not include the gardens and grounds.

The Broadlands entrance drive is off the A3090 on the south-western boundary of Romsey. For satnavs use the postcode SO51 8GG, NOT the official SO51 9ZD postcode!

Image is (c) Mike Searle, republished with gratitude under a Creative Commons license

More self catering near Broadlands

More bed and breakfasts near Broadlands

Self Catering near Romsey