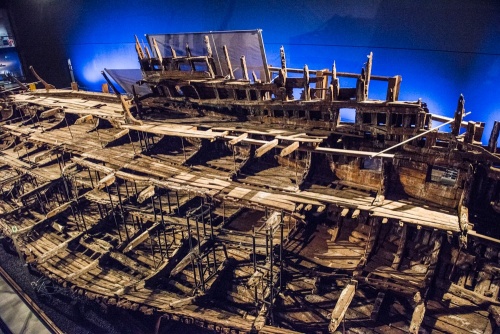 The Mary Rose was a powerful warship, built on the orders of King Henry VIII between 1509 and 1511. The ship went down off Portsmouth in 1545, but was later raised and is preserved in a specially-designed building at the Portsmouth Historic Dockyards.

There is a common misconception that the ship sank on its maiden voyage, but the truth is that the Mary Rose served for 34 years and was one of Henry VIII's favourite warships during that period.

The Mary Rose was one of the first ships built by Henry VIII after he came to the throne in 1509. Henry made it a priority to expand the royal navy, which at that time consisted of only five full-time ships. Before Henry's time, it was common practice to simply load guns onto merchant vessels in time of war.

Henry made it a priority to build a standing navy of full-time military vessels. Henry's new 'Army by Sea' began with two ships; the Peter Pomegranate, and its sister ship, the Mary Rose. The ship measured 32 metres along the keel and 11.66 metres in width.

Of the two vessels, the Mary Rose was the larger. She was rated at 500 tons when she was built, though this figure had been raised to 700 tons by the time she sank. 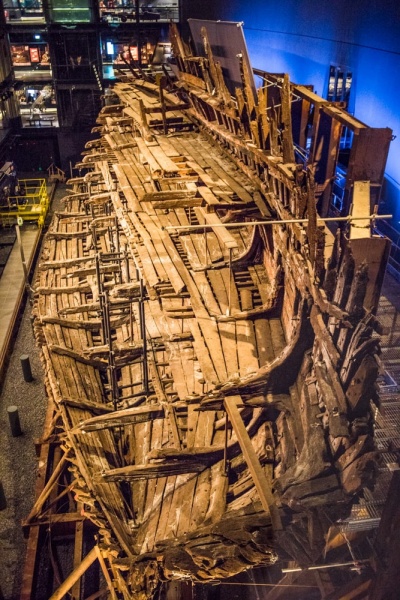 The Mary Rose from the stern

The name 'Mary Rose' was traditionally thought to be a reference to Henry's favourite sister, Mary Tudor, but there is no evidence to support this tradition. It is more likely a reference to the Virgin Mary, who was popularly known as 'The Mystic Rose' during the Tudor period.

The Mary Rose was kept in reserve from 1525-1535, partly due to the high cost of keeping such a large ship in operation. The ship was refitted in Portsmouth in 1527, then strengthened and refitted in 1535. The structure was strengthened with large beams, suggesting that the ship was intended to carry a heavier weight, and more gunports were cut in the hull. 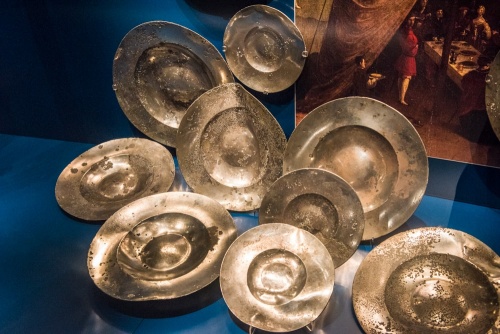 Pewter plates rescued from the wreck

The Battle of the Solent

In 1545 a large French fleet gathered at the mouth of the river Seine in preparation for an assault on England. The English fleet, including the Mary Rose, assembled at Portsmouth. On 16 July the French fleet, comprised of 128 ships, entered the Solent. Facing them were just 80 English ships.

The English commander, Viscount Lisle, retreated into Portsmouth harbour where the warships would be more effective.

On the evening of 18 July 1545 the King dined aboard his flagship, the Henry Grace a Dieu. During the meal he presented the Mary Rose to his new Vice Admiral of the Fleet, George Carew, to act as his flagship.

What happened next is a subject of debate. The French claimed that they sank the ship with a naval bombardment. The English, by contrast, blamed poor seamanship, or poor stability of the vessel after its latest refit. Whatever the reason, about 500 men drowned when the Mary Rose suddenly keeled over and sank during the engagement with the French. Only 34 sailors survived.

After the Battle of the Solent, the English tried unsuccessfully to salvage the wreck of the Mary Rose, but they were unable to refloat the vessel or to shift the wreck into shallower water. Salvage attempts were abandoned and the wreck gradually became submerged by silt. Luckily, the wreck was covered by a layer of hard clay, which sealed the timbers and prevented erosion. 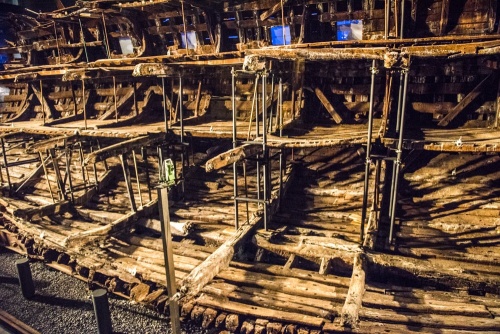 A closer look at the hull

In 1836 two divers discovered the wreck and were able to recover a bronze demi-cannon, several guns, and a number of small artefacts, but the wreck site was reported to be destroyed, and for the second time the Mary Rose was lost to history.

And so it might have remained but for the efforts of one man; Alexander McKee, who founded Project Solent Ships in 1965 with the aim of investigating wrecks in the Solent and more specifically, finding the Mary Rose. Using sonar to scan the sea floor, McKee and his team found an odd shape buried beneath the seabed.

Over a period of 3 years from 1968-1971 volunteer divers using water jets, dredging equipment and airlifts excavated the site. The climax of their efforts came on 5 May 1971 when a diver named Percy Ackland discovered three of the port frames of the Mary Rose.

The wreck was slowly and carefully cleared. Every piece of timber and every artefact that emerged from the mud was recorded and catalogued. Every item removed from the wreckage was stored in a precisely controlled environment to prevent light and air damage.

A huge archaeological and engineering project result in a large section of the hull being raised in 1982, and the ship was towed to a special conservation building in Portsmouth for preservation and display to the public. 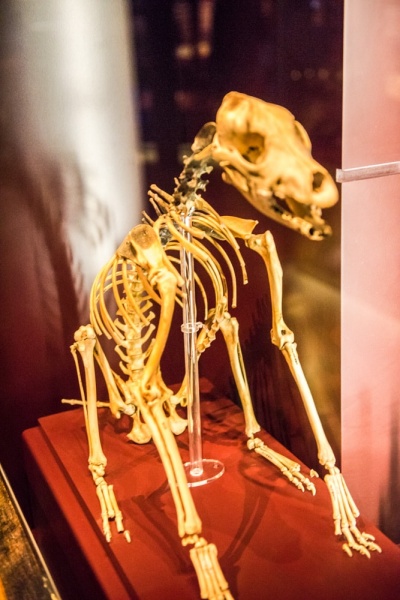 The visitor experience is really in two parts. There is the ship itself, which is utterly compelling, and then there are exhibitions of artefacts found onboard. In addition, there is a fascinating display on the Battle of the Solent, which explores how the Mary Rose sank and the course of the battle.

There is also a display covering the rediscovery of the ship and the fascinating story of how it was raised from the seabed and brought safely to Portsmouth Historic Dockyard.

You can walk directly 'through' the ship, with the salvaged hull on one side and objects found in that location on the other. So you get to see how the crew worked, lived, and died.

The artefacts tell an enthralling story; you can see how historians were able to determine what occupation some of the drowned men had by studying their skeletons. For example, one skeleton shows a pronounced twist and strong bones on one side, suggesting that the deceased was an archer used to bending a longbow with his right arm.

One poignant exhibit is a ship's dog, dubbed Hatch, who was found outside the ship carpenter's cabin. You can see a backgammon board for whiling away leisure time, personal items like combs made of bone, and a tiny scoop for cleaning wax from ears. The range of artefacts is incredible and they provide a fascinating glimpse into life in Tudor England - a life that ended all too suddenly for the crew of the Mary Rose.

The most striking part of the experience is the view over the wreck from the upper viewing gallery, with the Mary Rose stretched out below you. Our family have visited the Mary Rose 3 times, and each time the visiting experience has been improved and we learn more about this amazing ship and its remarkable history. 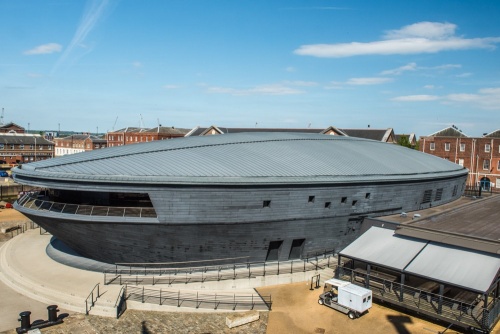 The Mary Rose is one of several vessels on display at the Portsmouth Historic Dockyard. Others include the HMS Victory and HMS Warrior. Also at the dockyard is the Royal Naval Museum. The Mary Rose has a separate admission to the other attractions, though a variety of joint tickets are available.

Reaching the Historic Dockyards is very easy. The site is very well signposted from roads in and around Portsmouth. The entrance is almost directly opposite Portsmouth Harbour rail station and the huge Gunwharf Quay shopping area. 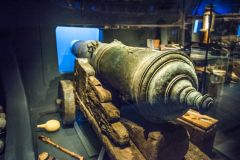 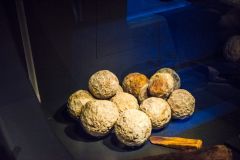 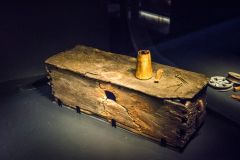 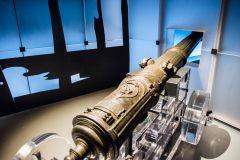 Nearest Accommodation to The Mary Rose:

More self catering near The Mary Rose >>

More Hotels near The Mary Rose >>

More bed and breakfasts near The Mary Rose >>