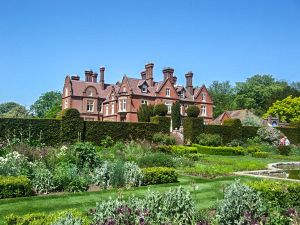 Ten acres of lovely landscape gardens surround a 19th-century manor. Here you will find woodland walks, rows of softly curving yew hedges, and an Edwardian rock garden, all in an attractive, informal setting.

In 1870 Sir John Croft asked architect Charles Trollope to design a mansion at Doddington. Three years later Croft called in Markham Nesfield to lay out formal terraced garden beside his new house. Much of the Victorian gardens were altered in the Edwardian period, when General and Mrs Douglas Jeffreys added a mile of box hedging and a rock garden. Mrs Jeffreys used Kentish rag stone from a quarry at Maidstone to create a series of descending waterways that empty into a large pool.

The garden features a large area of woodland, where azaleas and rhododendron flourish. The Edwardian rock garden is dotted with small pools, and there is a sunken garden area with lush herbaceous borders.

One of the most picturesque features is a long grass walk terminating in a folly of brick and flint. Sir Roy Strong has called this folly 'a piece of Hampton Court', and it is easy to see why, for it resembles the Tudor palace in style and materials. Yet it is one of the most recent additions to the garden, designed in 1997 by Richard Oldfield as a memorial to his first wife.

Long yew hedges are still a feature at Doddington, and there are numerous old trees arranged around the estate. The hedges have grown and taken on striking amorphous shapes reminiscent of soft, puffy clouds.

The large pool installed in the Edwardian period has been remodelled so that one side looks like a quarry wall with water trickling down it. There is also a modern viewing platform over the pool. Around the rock garden are clustered a variety of shrubs, grasses, trees, and alpine plants.

Colours are at their best in May and June when the woodland garden is in full bloom. One feature of the woodland is a Wellingtonia Walk, laid out in the late Victorian period by Sir John Croft. The sunken garden flows from tulips early in the year to alliums, roses, and euphorbias later in the summer.

Doddington has featured in numerous magazine articles and acted as a setting for several films and TV series. The gardens are regularly open for the National Garden Scheme and on specified days from April-October. 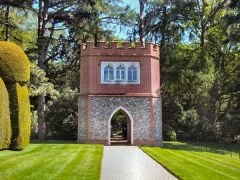 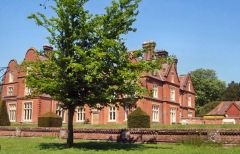 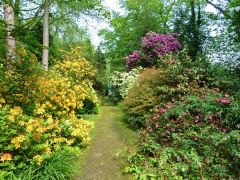