Crowcombe, Church of the Holy Ghost 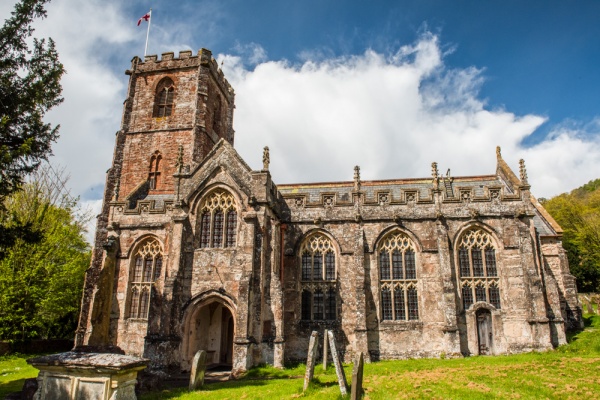 The Church of the Holy Ghost, Crowcombe

The village of Crowcombe nestles into the western slopes of the Quantock Hills south-east of Williton. In the centre of the village, beside the stately home of Crowcombe Court, stands the medieval Church of the Holy Ghost. The dedication to the Holy Ghost is thought to be unique in Britain.

The first church in Crowcombe was erected in the Saxon period, but the oldest part of the present red sandstone building is the west tower, which was built in the 14th century. It holds a ring of six bells, the oldest cast in 1440.

The west tower was originally topped by an 80-foot high spire. In 1725 the church steeple was struck by lightning and came crashing down, miraculously missing a crowd of people gathering in the porch for worship. The steeple was never repaired, and you can see the top in the churchyard, standing upright like a peculiar churchyard cross. Some of the stone from the fallen steeple was used in the church restoration.

At the same time, the south porch was built with its fan-vaulted roof. Over the porch is a parvise, a chamber for the priest, reached by a spiral stair. Outside the porch is a 14th-century preaching cross. 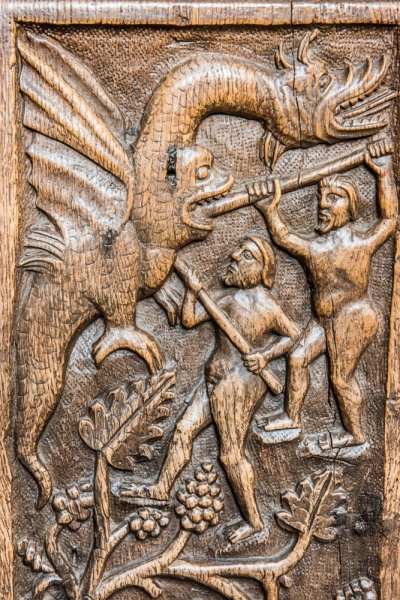 Sir Roger was probably responsible for the elegant, slender pillars separating the nave and aisle. At the east end of the aisle is a 15th century Perpendicular font, carved with a series of seated figures that somehow escaped destruction at the hand of Cromwell's soldiers during the Civil War. Among the carved figures are a nun, a bishop, a knight, St Anne, and the Virgin Mary

There is outstanding carved 16th-century bench ends, probably carved in 1534 (the date appears on one of the benches). The carvings cover a wide range of subjects, from ornate Gothic tracery to mermaids, fruit, foliage, heraldic symbols, and three traditional Green Man symbols.

One interesting bench end depicts two naked men of Crowcombe doing battle with the legendary two-headed dragon of Shervage Woods, known as the Gurt Worm. According to legend the dragon was finally defeated and cut into two halves, the halves forming the Quantock Hills. The Crowcombe bench ends are superb and are easily among the best in Somerset.

Separating the nave from the chancel is a wooden screen built in 1728. A similar screen separates the south aisle from the chancel. It too was built in 1728 as was the finely carved pulpit. What is unusual is the late date of the screens; most church screens were destroyed during the Reformation. One theory for the late date is that the 1728 screens were simply replacements for medieval screens that had been damaged when the steeple fell in 1725.

One of the most striking historical features inside the church is a large chamber that looks like a side chapel, reached by a set of steps up from the nave. This is not, in fact, part of the church at all, but is the private property of the lords of the manor (originally the Carew family). 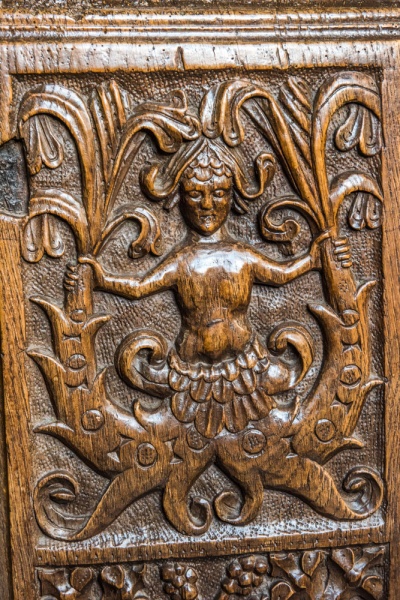 Inside the 'chapel' are a wonderful array of historical monuments and 18th-century funeral hatchments. The chapel was built (or perhaps rebuilt) in 1665 by Thomas Carew of Crowcombe Court. It is now known as the Carew Aisle and contains numerous tablets to servants of the Carew and Bernard families of Crowcombe Court.

Behind the high altar is a beautifully carved Victorian reredos, installed in 1876 as a memorial to the rector's wife.

The Church of the Holy Ghost was selected by author Simon Jenkins for his popular book, 'England's Thousand Best Churches'.

Across the road from the churchyard stands the medieval Church House, built around 1515 to hold church ales, with the ground floor used to brew ale and bake bread and the upper floor used for village celebrations, feasting, and dancing. When church ales became unpopular during the Puritan era the Church House was converted to offer accommodation for 6 poor people, and a charity school occupied the first floor. It is still used for receptions, exhibitions, craft fairs, and for private hire. 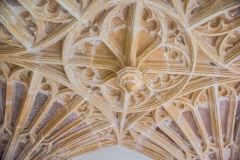 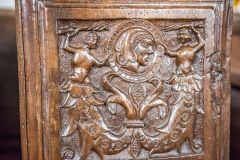 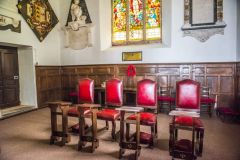 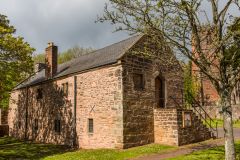 About Crowcombe
Address: Crowcombe, Somerset, England, TA4 4AA
Attraction Type: Historic Church
Location: Beside the entrance to Crowcombe Court in the centre of the village, off the A358 3 miles south-east of Bicknoller. Parking along the road.
Website: Crowcombe
Location map
OS: ST140367
Photo Credit: David Ross and Britain Express

More self catering near Crowcombe

More bed and breakfasts near Crowcombe