See here for part 1 of Joanne's look at Lyme Regis

At Charles' suggestion I joined one and with about twenty other tourists happily followed him up and down back alleys, through private gardens, and across several bridges over the River Lym.

We saw Monmouth House where the Duke of Monmouth spent his first night in England after he came ashore near the Cobb to begin his ill-fated attempt to gain the throne. We saw 'Jane's Garden' the place that marks the site of the house where Jane Austen began writing Persuasion, and of course, we stopped to inspect 'Granny's Teeth' - the series of uneven stone steps running diagonally tip the inside of the Cobb wall at the point where it begins to turn out to the sea.

It was from these rudimentary steps that Miss Musgrove, Persuasion's frivolous heroine, jumped. Then we marched along the curving roadway of the Cobb itself as it curves out into the waters of Lyme Bay and the Channel. 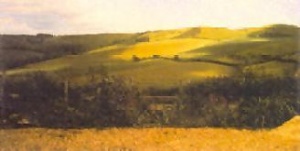 On the walk from
Chideock to Seatown

We couldn't help feeling we were walking on a tangible link with the medieval past when Richard explained that the first historic mention of the Cobb was in 1313!

We followed him back to the centre of town and the house on Church Street from which Henry Fielding tried to carry away his lady love but was prevented by her guardian. Fielding later based the character of Sarah Andrews in Tom Jones on his lost love.

From there our pied piper led us to Sherbome Lane, that steep little passageway where we came in contact with the oldest part of Lyme. It has been identified as the piece of land which Cynewulf, King of the West Saxons, gave to Sherborne Abbey in 774 AD for the boiling of salt water to make salt.

Our tour ended in front of the Volunteer Inn on Broad Street, the pub that our amiable guide 'just happened to own'. He invited us all in to view his extensive collection of chamber pots that decorate the bar. How could we refuse? Richard had provided us with two hours of fascinating bits of Lyme's history absolutely free of charge.

However, I don't think it was just a desire to learn about history that induced the lady from Yorkshire to join our tour. She was standing next to me as we waited in front of the museum for the tour to begin and confided in me that this was her third tour this summer. "He's gorgeous, wait until you see. " She was right. He is gorgeous! As soon as I saw him I remembered that I had seen him before - at home, on the Johnny Carson's TV Show.

Charles told me that he was twice World Champion Town Crier and three times best-dressed town crier and that his wife makes his beautiful outfits. He donates much of the money he makes from public appearances all over the world to improving the town. No wonder he's so popular.

During our dinners together Charles would suggest places I might enjoy visiting and I would report back to him the next day. He said I could walk along the leafy green banks of the River Lym, starting on Combe Street and, following its inland route, continue all of the way to the Devon border a few miles away near the Black Dog Inn and some pretty mill cottages converted from a long in-active mill.

He told me the story of the hidden treasure found in the inn's loft. The ghost of a black dog was supposed to have guided his master to its hiding place. I had fun following the course of this walk back and forth across the river on a series of interesting little bridges, some wooden and some stone, most of them very old.

One led to a tidy little garden and the Leper's Well. Authentic sources verify that there was a leper hospital here in medieval times. Richard Fox and his friends were responsible for creating the pretty garden that surrounds the well.

On Gosling Bridge, said to have originated in 1584, I stood for a while and talked with a woman who was, appropriately enough, concerned about a mother goose who kept calling for her lost gosling. She said the mother had been plaintively calling all day without success. She was afraid the young gosling had been washed out to sea during the recent rain storm. I could hear the melancholy call for a long while as I continued on my walk. The woman's concern was typical of so many Dorset people I've met ... a very nice trait, I think.

I learned from Charles that I could catch the bus to Exeter right below our window in the town square. At the same stop I could board one that went to Sidmouth and another that went all of the way to Taunton. I tried all three and had marvellous times. However, the excursion that I enjoyed most was made to Seatown, only a few miles away. I caught the 'Chesil Coaster' going east on the A35 and got off about ten minutes later in Chideock, an attractive village of thatched cob and yellow sandstone cottages built on the fertile slopes of the valley of the River Winniford.

I walked the mile or so down to Seatown along Duck Street and passed several very pretty cottages with beautiful curving thatched roofs and handsome brick chimneys. I was pleased to see The Anchor, an inviting looking pub at the bottom of the road between Golden Cap and Thorncombe Beacon where one could sit outside and enjoy the dramatic view of these two cliffs as well as the sparkling blue channel.

Golden Cap is the highest point on the southern coast and Thorncombe Beacon is second highest so, since uphill walking is not my strong point, I didn't hesitate in choosing Thomcombe Beacon for my assault. I was already very hungry so I promised myself a good lunch at the Anchor after completing the climb and struggled to the top, pausing countless times to catch my breath.

The view from the summit was magnificent and worth every huff and puff. I could see the Devon coast to the West and Chesil Beach and Portland Bill to the East. 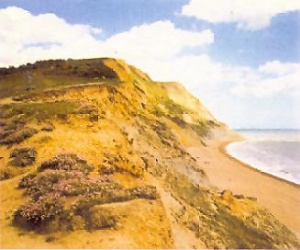 I was congratulating myself on a job well done when I glanced at my watch. Good grief! It was 1.55! Five minutes before the Anchor stopped serving.

I didn't set any records on my ascent of Thorncombe Beacon but I'm sure I must have on my decent. I came down in nothing flat. It's a good thing no one was in my way because I would have mowed them down. I had the same experience I used to have as a child when I would foolishly start running at the top of a hill only to find I couldn't stop until I reached the bottom. I'm lucky I didn't fall or turn my ankle.

I tried to look cool and collected as I ordered my ploughman's at 1.59 and staggered to my seat in the patio where I could look back at Thorricombe Beacon with a tinge of triumph! That night at the Bell Cliff I related my experiences to Charles. He seemed amused but warned me of the dangers of taking foolish chances while travelling on my own.

When we parted for the last time he said: "remember - next time you're in Lyme be sure to say hello. Just ask anyone for 'Charles with the Beard', they will know who you mean."

Charles was a good friend and gave me much good advice about travelling in Dorset but he's not the only Lyme resident I fondly remember from that visit in 1984.

There was a little lady working in the chemist's shop at the bottom of Broad Street that I remember for an act of kindness far above and beyond the call of duty. She was behind the counter when I dropped off three rolls of film taken on my first three days in Lyme - I was being conservative then, only one roll a day. She took my name and the name of my hotel and promised that the prints would be ready on the morning of my departure at the end of the week.

When I returned on the appointed morning, anxious to see if I had managed to capture any of Lyme's charm on film, she again asked my name and the name of my hotel. Her disappointment was almost as great as my own when her search failed to produce the eagerly anticipated packet of prints. She apologised sincerely and assured me she would forward it to my next stop in Sherborne. She couldn't understand why my prints hadn't arrived on schedule.

I'm afraid my disappointment was apparent as I left the shop to catch the waiting town bus that would take me the half mile or so up to the top of Silver Street and the Mariners Hotel. I had checked out of the Three Cups and into the Mariners after my third day when Charles told me about its cosy, intimate atmosphere and its charming higgledy piggledy seventeenth century. decor.

I had just finished shoving a souvenir fossil from the Lyme Fossil Shop into an already overstuffed Bruno and was getting ready to leave when there was a knock at my door. It was the lady from the chemist's shop. She was buffing and puffing almost as badly as I had been after climbing Thomcombe Beacon. She had my prints!

After I left her shop she made a thorough check of all the envelopes and had found mine right where it belonged - filed under the Three Cups Hotel. I thought she was just being friendly each time she asked for my hotel. I didn't know she kept her filing system according to the places where her customers were staying.

When I left the inn I was staying at the Three Cups; when I had tried to pick it up that morning I told her I was at the Mariners. She trudged all the way up Broad Street and on to Silver Street and the Mariners just to deliver my prints when the confusion was really my fault.

She could have easily mailed them on to me and saved herself that murderous climb. She didn't want to chance waiting for the next bus for fear of missing me and she knew how disappointed I had been. This might not sound like much of a favour for those who haven't climbed the hill from Lyme's town square to the top of Silver Street but those who have will know what this means.

She and Charles are just two of dozens of Dorset citizens who have helped to form links in that chain that keeps pulling me back. I've returned to Lyme Regis on each of my visits. The next year was 1985, the three hundredth anniversary of the Duke of Monmouth's landing. I arrived to see hundreds of costumed followers of the ill-fated Duke marching down Broad Street. Canons could be beard firing from the Cobb.

The next time was in the company of 'old J.R,', our esteemed editor. He too was performing an act of selfless kindness on my behalf. He was braving late Friday afternoon traffic on the A35 when all the housewives are out running their errands! I took a snapshot from the front seat of his car. Small wonder that the chain keeps getting stronger and stronger.