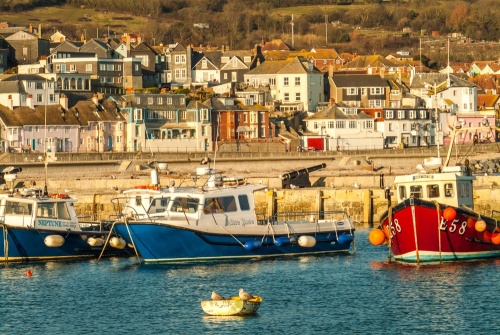 My first view of Lyme Regis was from the window of a National Express Coach. My sister and I were on our way from Dorchester to Penzance when we came down the Charmouth Road to Church Street and the town square, then turned up Broad Street and paused for a few minutes in the car park on Sidmouth Road.

The driver let us out to stretch our legs while new passengers boarded. I was already very impressed with the picturesque Georgian streets we had just passed through when I walked to the edge of the park to look over the cliff.

I expected to find a pleasant view of Lyme Bay and the Channel but got much more than I bargained for. The blue of the sea and the puffy white clouds mixed with the unique Mediterranean sunlight to give my first view of Lyme's seawall, the medieval Cobb, a beautiful mystical quality.

Of course, this was 1982 and I was still under the influence of The French Lieutenant's Woman, the movie made from John Fowles' intriguing Victorian novel. The opening scene with Meryl Streep walking out on the Cobb to keep her forlorn vigil for the French Lieutenant who loved and abandoned her was still fresh in my mind. I was completely captivated. My sister had to pull me back to the coach because I was so entranced I hadn't heard the driver honking - anxious to be on his way.

That first brief glimpse of Lyme Regis was the final link in a chain of dozens of impressions made during our short three day stay in Dorset. This chain was to grow in strength and pull me back to the gentle, green county again and again -today it's stronger than ever and still growing.

The next time I saw Lyme I was again riding on public transport; this time it was the 'Chesil Coaster', the Southern National bus that ran from Weymouth to Lyme Regis six times a day.

At least it did in 1984. I'm sorry to hear the running times have been reduced since then.

I was coming from the Ilchester Arms in Abbotsbury and had boarded right in front of the inn. This time I was planning to stay in Lyme for a week and had booked a room at the Three Cups Hotel, just a few hundred yards from where the bus let me off in the town square. I was alone this time, except for Bruno and Bernice - my monster suitcases. They each weighed at least a ton and I had to transport them up that steep hill to the Three Cups myself.

It was only a short distance but I thought I was going to die along the way. It wasn't just because they were so heavy, it was because of the tremendous effort it took to look nonchalant as I was dragging them along when I really wanted to huff and puff like an overworked steam engine. This was before I became more sophisticated in my Dorset travels and learned how easy it is to take a taxi between guest houses and only use the buses for excursions after settling in.

I nearly fell across the threshold of the Three Cups and was practically crawling as I dragged Bruno and Bernice the last few yards to the desk and checked in.

My first thought after recovering enough to unpack and return to Broad Street was that I deserved some refreshment. It was four p.m. and time for a cream tea. The Bell Cliff Restaurant perched above the square overlooking the bay caught my eye; it seemed just the place to revive my spirits. It was a happy choice because here, on my first day in Lyme Regis, I met "Charles with the Beard".

He was sitting alone at a table for two when I entered, a venerable gentleman with a magnificent white beard. All of the tables were occupied and so the waitress asked Charles if I could join him - not a very unusual custom in Dorset but it would have been very unusual in L.A. He graciously agreed and I rather gingerly accepted the seat by the window.

It was my first experience dining at an intimate table for two with a perfect stranger. I thought at first that Charles was the owner of the Bell Cliff since all the waitresses called him by name and often came over to chat.

A picture of him in Victorian dress was displayed in a prominent place by the entrance. I remembered that the producers of The French Lieutenant's Woman insisted on using the townspeople as extras during the filming. Now, even without the Victorian costume, Charles looked like a character straight out of Hardy. As our meal progressed I learned that he was not the owner but a long time resident of Lyme who dined regularly at the Bell Cliff because he thought it served some of the best food in town. 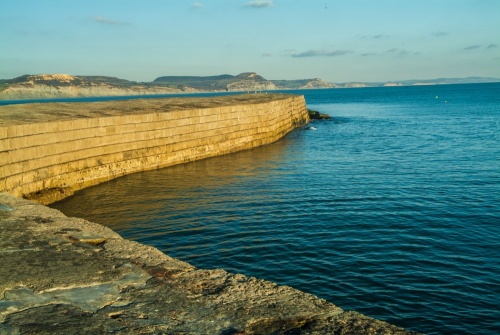 Charles had a charming manner and I found him very easy to talk to because he didn't seem to mind answering all of my questions. In fact he seemed to enjoy telling me about Lyme's history and about its more interesting citizens.

I learned which house John Fowles lives in and was interested to hear that the best selling author takes a scholarly interest in Dorset and has completed several in-depth studies of the county's history. As curator of Lyme's museum and art gallery he takes a lively interest in such mundane things as the museum's inadequate heating system and its leaky roof. I agreed with Charles about the Bell Cliff's good food so we enjoyed several more meals together during my week's stay.

At our table by the window overlooking the square we could watch the comings and goings of the entire town. Every few minutes someone passing by would look up at our window and wave.

Charles would wave back and tell me a little bit about the passer-by... "That's the skipper of the Gannet II. He came to Lyme from Wales when he was a young man looking for a place to settle down. He took one look at Lyme Bay and knew his search was over. He makes a good living fishing and still prefers the old-fashioned wooden lobster traps to the modern plastic ones.

Sometimes he takes tourists on trips around the bay. Maybe you would enjoy a ride with him?... There's old John Stephens, he's seventy six. He had an operation on his hip a few months ago ... see how well he manages the hill? There goes Maureen; she was born here, you can always tell a Lyme girl by her calves, they're particularly well developed because of our steep hills."

It was Charles who told me about Richard Fox, Lyme's town crier. Richard gave tours on Tuesdays and Thursdays that were crowded with interesting facts about Lyme's history...