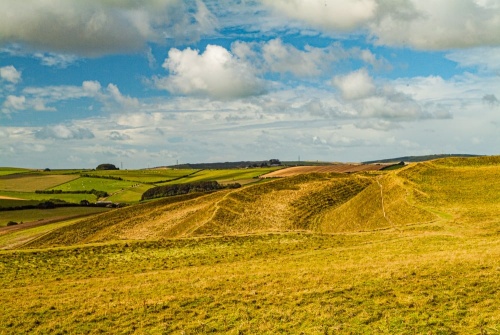 Maiden Castle is the largest and most famous pre-Roman fortress in Britain. The site is not a 'castle' in the medieval sense of the term, but a hilltop enclosure defended by high banks and ditches. Maiden Castle is nearly 47 acres in size, with banks as high as 80 feet.

The term 'maiden' may be misleading; it derives from the pre-Celtic (Brythonic) term 'mai dun', which is usually translated as 'great hill', but may also be rendered as 'principal fort'.

A causewayed camp was erected on the hill as far back as 3500 BCE, and later a bank barrow measuring an impressive 1800 feet was added. Sometime around 350 BCE, the hill was turned into a full-fledged hill fort, probably under the direction of the Durotriges tribe, the region's dominant Celtic tribe. 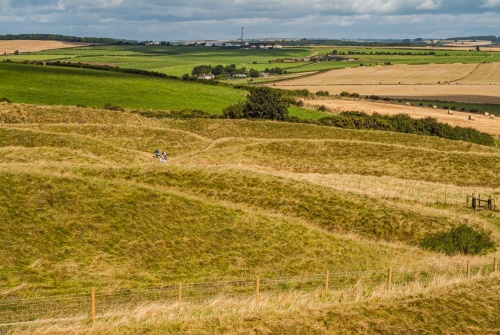 Most of the visible ramparts were erected in the 1st century BC. These consist of three concentric rings of ditches and banks, with the entrance through each bank offset to isolate any invader who managed to penetrate the defences. When the earthworks were fresh, they would have been bare of vegetation, leaving the defences gleaming white from the underlying chalk.

Maiden Castle was home to a Neolithic settlement long before the Iron Age earthworks were constructed. Archaeologists have uncovered evidence that Maiden Castle was occupied as early as 6,000 years ago. These first settlers built a causewayed enclosure on the eastern part of the hill's summit, defended by two banks and ditches. This causewayed camp was among the earliest in Britain. 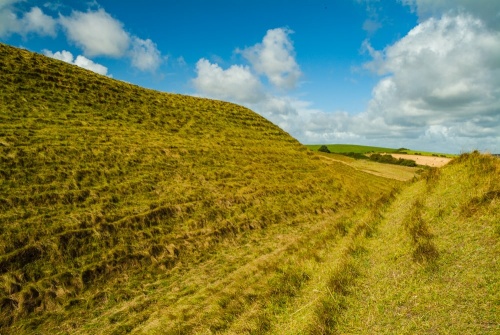 Another view within the Iron Age earthworks

We know that there was large-scale production of flint axes inside the camp enclosure.

After the causewayed camp fell out of use, a huge earthen mound known as a bank barrow was built. This extraordinary barrow stretched for almost 550m and was flanked by a pair of ditches. Very little of this barrow remains.

The earliest hillfort was built in the early Iron Age on top of the Neolithic camp. This first hillfort was defended by a single earthwork bank and ditch. The fort was later extended to cover the entire summit of the hill. The existing ramparts were raised at further ramparts were added to create a complex defensive structure.

The Iron Age community at Maiden Castle began as a small settlement but grew to become the largest community in the region. Archaeologiosts have found signs of large storehouses for grain within the complex. The community was rebuilt with a regular pattern of streets and there is evidence of prolonged, large-scale metalworking and trade with the European cointinent.

In 1937 archaeologists found a mass grave near the eastern entrance with over 52 skeletons, many of which showed severe trauma, leading to the conclusion that they were warriors who had died defending Maiden Castle against a Roman atack.

The skeletons had been buried with an impressive array of grave goods including rings, brooches, pottery, and even joints of meat to enjoy in the afterlife. 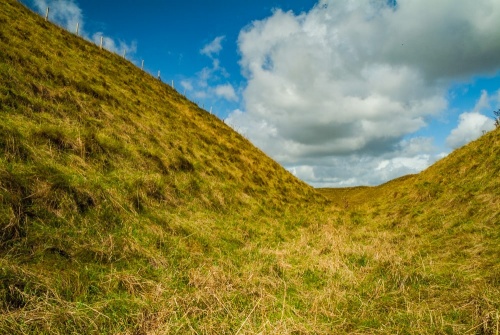 In the earthwork ditch

That interpretation has changed over the years, with most archaeologists now believing that the cemetery was in use for a long period of time and the warriors may have been involved in local skirmishes against other British tribes.

We do know that the hilltop fort was abandoned within a few decades of the Romans taking control of the region. The Romans built the planned town of Durnovaria (Dorchester) to the north-east to act as a tribal capital for the Durotriges.

During the 4th century the Romano-British inhabitants of Dorchester erected a small temple within the boundaries of the fort, the foundations of which can still be seen. 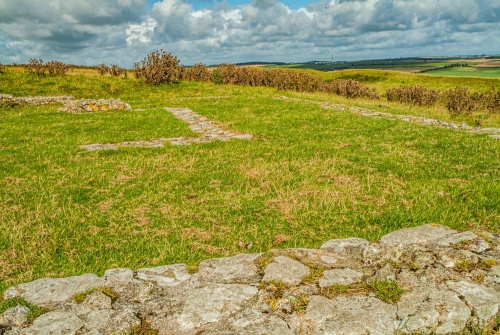 Maiden Castle is in the care of English Heritage and is open all year at any reasonable time. Access is by way of Maiden Castle Road, immediately south-west of Dorchester. There is a free parking area at the end of the road. The site is easily visible from the nearby A354 and A35 but to really appreciate Maiden Castle you need to walk through the earthwork defences to the top of the castle hill. 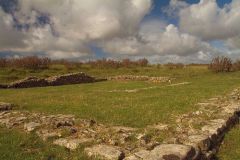 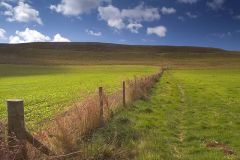 More self catering near Maiden Castle