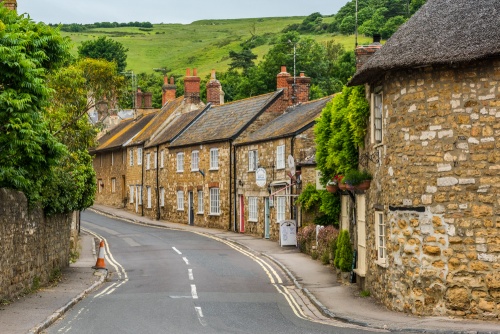 There is so much to see in the village of Abbotsbury; it is one of those picturesque English villages that seem to be possessed of an embarrassment of historic interest. Abbotsbury lies near the Dorset coast, at one end of the long sweep of shingle known as Chesil Bank.

On the coast is a world-famous Swannery, where thousands of swans breed each year, while within the village itself is one of the largest and best-preserved medieval tithe barns in England.

On the outskirts of the village is a superb sub-tropical garden, while a medieval chapel stands at the top of a high hill overlooking the village below. A short distance away is the ruin of an Iron Age hill fort. 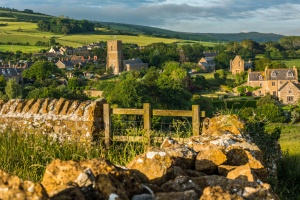 The history of settlement at Abbotsbury goes back to at least the Bronze Age (2300 B.C. - 700 B.C.) Barrow burials have been found just north of the present village site, and Wears Hill, to the northwest, boasts the Iron Age hill fort called Abbotsbury Castle. The fort encloses an area of 4 acres, and within the double ramparts, the outlines of huts can still be seen.

The first written record of Abbotsbury dates to AD 1023 when King Canute granted land in the area to his steward, Orc, who later founded a Benedictine monastery here. That monastery was to become one of the wealthiest in Dorset.

Two major reminders of the monastic presence remain in Abbotsbury. One is the former abbey tithe barn, a magnificent structure built about 1400, which now houses a country museum. The barn was originally 270 feet long; long enough to pack several parish churches inside, though it is now half that length. 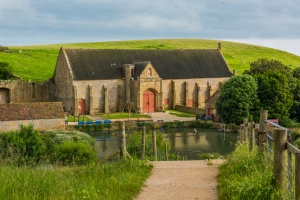 The second reminder is St Catherine's Chapel, which looks down on Abbotsbury from its perch atop the hill which dominates the village. The chapel, which is built entirely of local stone, survived the Dissolution of the Monasteries because it was so useful as a navigation aid to ships crossing Lyme Bay.

Surrounding the chapel are wide terraces cut into the hillside. These are strip lynchets; agricultural terraces created in the Middle Ages. The way they hug the curve of the hillside has given them the local nickname "Chapel Rings".

A striking carving in Purbeck marble, thought to represent a 12th-century abbot, is preserved inside the porch of St Nicholas parish church, while foundations of the north wall of the Abbey can still be seen in the churchyard.

The church itself was built in the late 14th century to serve the village, not the abbey. The interior is notable for the gilded reredos, which covers almost the entire east wall behind the altar. The reredos, which depicts the ten commandments, is crafted from plaster, surmounted by a cupola raised on columns. It was donated to the church by Mrs Susanna Strangways Horner in 1751. Much older is the octagonal font, thought to be contemporary with the founding of the church. 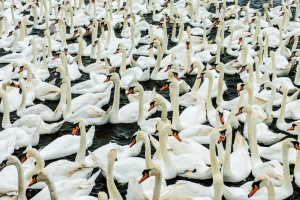 Swans feeding at the
Abbotsbury Swannery

Abbotsbury in the Civil War

St Nicholas's might appear a place of peace and calm today, but such was not always the case. The Strangways family, who held the manor of Abbotsbury, were staunch supporters of Charles II during the Civil War. In 1643 a Parliamentary force attempted to occupy the family house. Lady Strangways refused to cooperate with them, and as a result, the house was looted.

Worse was to follow; in November 1644 a Parliamentary army marched south from Dorchester, determined to defeat the Royalist garrison of Abbotsbury, then commanded by Colonel James Strangways, son of the current lord of Abbotsbury. Strangways had some of his men occupy the church. The Roundheads stormed St Nicholas's, and in a sharp skirmish, defeated Strangway's men. Two bullet holes from that conflict can be seen in the Jacobean canopy above the pulpit.

The Parliamentarians then attacked the manor, which they took after a battle lasting six hours. They gleefully began to ransack the house, heedless of warnings from the defeated royalists that barrels of powder were in imminent danger of exploding. The resulting explosion damaged the house beyond repair and today nothing of the structure remains.

The village of Abbotsbury went into a decline after the war, so that by 1752 the Journal of London was given to proclaim that "All the people of Abbotsbury, including the vicar, are thieves, smugglers, and plunderers of wrecks."

Don't be put off by that dire verdict - Abbotsbury is a wonderful place to visit today. The chapel can be reached via Rope Walk, and affords superb views out over Chesil Beach and The Fleet to the sea. The Swannery draws nature lovers every spring to see baby swans by the hundreds. Just west of the village lies Abbotsbury Sub Tropical Garden, founded by Elizabeth Strangways Horner, later Lady Ilchester. This is one of my favourite places to visit in the south of England. 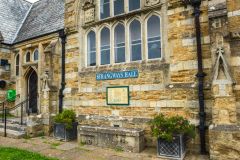 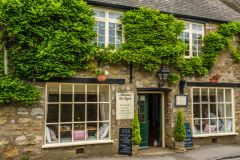 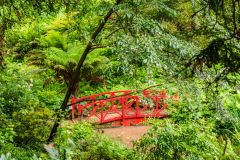 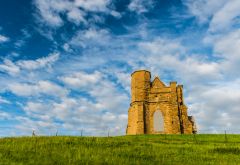 More self catering near Abbotsbury

More bed and breakfasts near Abbotsbury