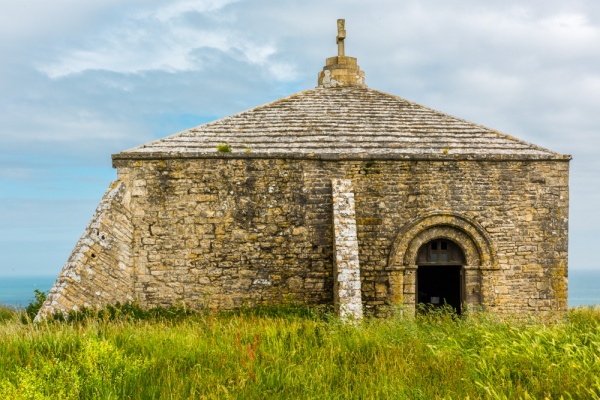 Atop the dramatic cliffs of St Aldhelm's Head, south of Worth Matravers village, stands a striking 12th-century chapel dedicated to St Aldhelm, the early 8th century Bishop of Sherborne. The chapel gives its name to the headland, which rises 354 feet above the rocky shore below. Near the chapel stands a coastguard lookout station and a radar research memorial. 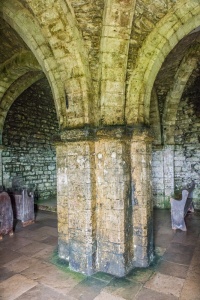 Though at first glance the stocky 12th-century building with a striking pyramidal roof looks as if it stands alone in a wide grassy area, a closer examination reveals that the chapel is built within a series of earthworks. These earthworks probably enclosed a roughly circular pre-Conquest Christian enclosure, perhaps some form of monastic settlement. Such early Christian enclosures are unusual in England, though they were fairly common in Wales.

A similar enclosure was found on the site of Sherborne Castle, suggesting that there is a stronger link with St Aldhelm than just the chapel's dedication. Perhaps the monastic community here was a cell of a similar community founded by Aldhelm at Sherborne?

The chapel is built to a very unusual square plan, with sides 7.77 metres long. Each angle of the square points to a cardinal point of the compass. These peculiarities have led some historians to suggest that the building did not originally have a religious purpose. However, the presence of medieval graves outside the chapel walls and the beautifully vaulted interior does suggest that it was intended for worship from the beginning.

Very little is known about the chapel's origins. A local legend says that in AD 1140 a bridge and groom were drowned when their boat capsized off the headland, and the bride's father erected the chapel built the chapel in their memory. He paid for a light to be kept burning in the chapel to help sailors avoid his daughter's fate. It is entirely possible that the legend is based on fact, and the chapel was taken over by the church.

The earliest written record comes from the Pipe Rolls of Henry III, where it is recorded that the chapel was served by a chaplain who was paid 50 shillings annually by the Crown. The sum of 50 shillings was the going rate for a royal chaplain at that time, which suggests that St Aldhelm's Chapel was a place of some significance. 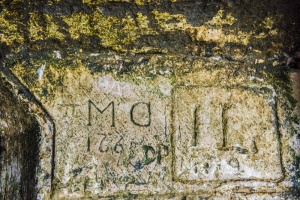 If so, that significance waned, for by 1291 the chaplain was paid just 20 shillings. In 1428 records show a similar payment, but notes that the parish had no inhabitants.

It makes sense that the chapel served as a chantry, for a document from 1625, some 75 years after Edward VI abolished chantries, states that the chapel was used solely as an aid to navigation by sailors. It is likely that local residents of Purbeck visited the chapel for a time after services ended but it was no longer regularly used for worship.

In 1957 local farmer Ted Miller was ploughing a nearby field and unearthed a large slab of Purbeck stone with the shape of a cross carved in relief on the surface. Under the slab was the skeleton of a woman, within a double row of upright stone slabs.

The bones were dated to the late 13th century. The remains of a small rectangular building nearby suggests that the woman may have been an anchoress; a religious hermit, perhaps linked to a rumoured leper colony nearby. She was given a religious burial, probably by the chantry priest.

The chapel is topped with a modern cross, but historians have found evidence that it may originally have supported a beacon, lending weight to the idea that it was founded to serve as an aide to navigation. 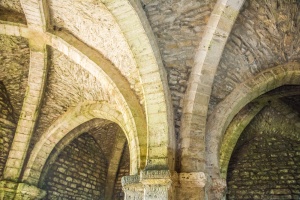 The chapel fell into decay and was in danger of falling down completely when it was rescued by John Scott, first Earl of Eldon, who purchased nearby Renscombe Farm in 1811. Eldon began the restoration process, which carried on sporadically throughout the 19th century. In 1873 a cross was erected on top of the chapel, and the first service in centuries was held in 1874.

During the late 19th century the villagers of Worth Matravers began a custom of carrying flowers to the chapel in a procession, followed by dancing.

In 1965 the Enscombe estate gave the chapel to the Worth Matravers church council, and it is once more used for regular services.

Inside the chapel is a large central column supporting the vaulted roof. In the column is a small opening, and there are several pieces of 17th century graffiti nearby. It seems very likely that in the 17th century, when the chapel was no longer used for worship, that it was used by local girls as a wishing chapel. The girls would drop a pin into the hole in the pillar and make a wish, usually to marry the man of their choice. It seems quite likely that the wishing custom may have been an old folk memory from the days when people made an offering to pray for the safe return of a sailor.

It takes some effort to get to St Aldhelm's Chapel, but that's just part of its appeal. The chapel stands at the end of a farm track, near the coastguard station south of Renscombe Farm, and can only be reached on foot. There is a parking area at the farm, and another at the top of Worth Matravers village. Though an OS map is useful, you can see the chapel across farm fields as you walk, so you should be able to reach it without trouble even without a map.

The Chapel stands on the South West Coast Path, so long-distance walkers will pas directly by. The chapel is always open to visitors; I came once at sunset and expected to find the door locked, but it was open, and I was able to enjoy the atmospheric interior while watching the sky turn gold and red behind the headland.

I highly recommend taking the trouble to visit St Aldhelm's Chapel. It is one of those magical places you will never forget. A lot of its appeal is the superb setting, atop the high cliffs. Then there is its curious shape, unlike any other medieval chapel I can recall, and the undoubted sense of age that seems to radiate from the walls. 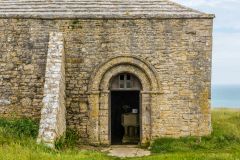 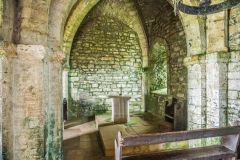 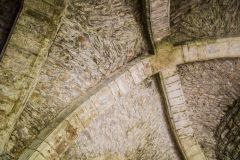 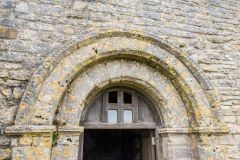