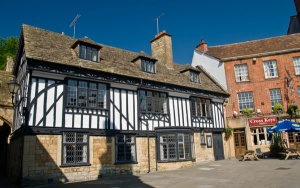 The market place in Sherborne

The town of Sherborne was once the capital of the Kingdom of Wessex. This ancient heritage is reflected in a variety of surviving medieval buildings, including the 15th-century almshouse, but more importantly in the superb abbey church.

The former church of Sherborne Abbey is one of the county's finest medieval buildings. The site has had a church since at least AD 705 when St. Aldhelm was the first Bishop of Sherborne. The See of Sherborne passed to Salisbury in 1075 before dying out entirely in 1122. 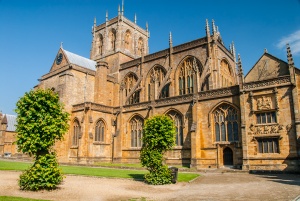 The church has remains from the Saxon period, but much of the largely Perpendicular style building is the result of a major renovation project beginning around 1420. The choir vaulting is one of the earliest examples of this style in England, but equally interesting are the fine 15th-century misericords with a wonderful mixture of carvings depicting scenes of everyday life, including a woman feeding her dog.

The interior of the church is resplendent with funerary monuments, including that of Sir Robert Horsey (1546) who sold the abbey church to the town after the Dissolution of the Monasteries. In the tower is a set of 8 bells estimated to be the heaviest such set in the world, with the bells weighing in at an average of over one ton each.

In the former abbey gatehouse is a museum tracing the history of the abbey and the town, and nearby is Sherborne School, founded in 1550. 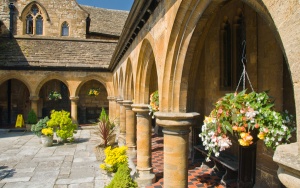 Just outside Sherborne is Sherborne Castle, the house built by Sir Walter Raleigh from the remains of a medieval hunting lodge. It is linked to the 12th century Sherborne Old Castle by a superb landscaped park and lake, the work of Capability Brown. The Old Castle was built by Henry I's Chancellor, Roger de Caen, Bishop of Salisbury, beginning in 1107, but was later destroyed by Cromwell's troops in the Civil War.

The majority of buildings in the town are built from the warm-toned Ham Hill Stone. Though pretty, the soft sandstone does not weather well, and most architectural features get a worn look with the passage of time.

More self catering near Sherborne

More bed and breakfasts near Sherborne

Self Catering near Sherborne