HERITAGE HIGHLIGHTS:   Remains of Sandwood Cottage stand by the machair 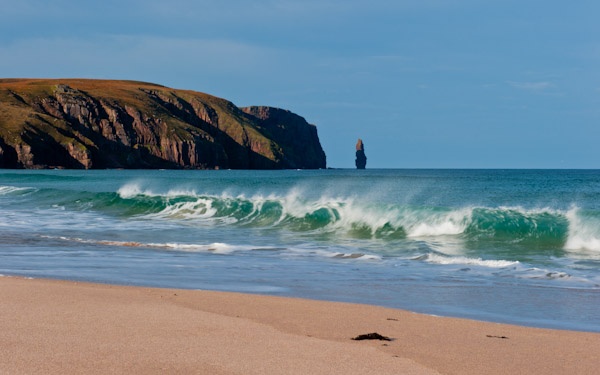 Sandwood Bay is a remote sandy bay in the northwest of the Scottish Highlands, north of Kinlochbervie, reached by what has been called 'one of the best walks in Scotland'. The main attraction at Sandwood is a glorious beach, perhaps the finest and most unspoiled beach in Britain. One of the reasons it is unspoiled, of course, is that it is so remote. The beach is part of Sandwood Estate, managed by the John Muir Trust.

ABOUT THE SANDWOOD ESTATE
It is the most northerly estate owned by the John Muir Trust, who have maintained it since 1993. The estate includes magnificent coastal scenery, extensive machair and dune systems, and small crofting settlements on the coast and peatlands away from the coastline. There are 8 small lochs within Sandwood Estate, and a Site of Special Scientific Interest (SSSI) with one of the largest and best-preserved areas of machair in mainland Scotland.

Sandwood Bay can only be reached after a long walk from the end of the road near Blairmore. To get to Sandwood you must turn off the A838 at Rhiconich and take the B801 towards Kinlochbervie.

At Kinlochbervie take the unclassified (single lane) road towards Sheigra and park at a small, signed free parking area at Blairmore, operated by the John Muir Trust. There is a toilet block and an information board with a map to help orient yourself. 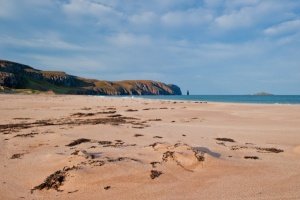 The trail is quite straightforward, so you could proceed without a map at all, but this is the Highlands, and it really is only sensible to have an OS map with you. Landranger OS sheet 9 covers this area.

I have seen various distances mentioned for the walk to Sandwood from Blairmore. I make it 4.5 miles or so, and as I recall I made the walk in about 1 3/4 hours carrying a pack full of camera gear. Your mileage may vary!

The route is essentially level, and follows a rough road most of the way. There are boggy sections, so like anywhere in the Highlands it is always a good idea to wear comfortable waterproof footwear.

I wouldn't fancy walking the route in rubber boots (wellies), though, as the sections along the rough track are very hard. Good hiking boots are the best notion. You could try to get by with trainers but if there has been any rain at all then sections of the path will be wet.

The road skirts the east shore of Loch na Gainimh and Loch a Mhuilinn, then runs along the west side of two small lochs before emerging onto a rise overlooking freshwater Sandwood Loch and the beginning of the machair. On a shelf of land to the right of the main path is the roofless ruin of Sandwood Cottage.

It is worth a quick detour just to marvel at what life must have been like here, in such an isolated spot. You might encounter a resident ghost, a shipwrecked mariner who is said to knock on the door of Sandwood Cottage on dark nights, looking for shelter.

Another version of the story suggests that the mariner is a sailor lost in the wreck of a Spanish Armada ship, and that Spanish treasure lies buried beneath the shifting sands. I must say, that though the day I visited Sandwood Cottage it was sunny and bright, there was a melancholy air about the place, and I didn't want to linger. 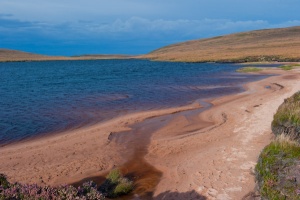 Looking down on Sandwood Bay

Rejoin the main path if you have detoured to the Cottage and follow the trail into the machair and out onto the beach. The landscape is amazing - a mix of marram-grass and sand dunes, ringed by sea cliffs and a freshwater loch, and views north towards Cape Wrath.

One feature worth noting at Sandwood is a small sea stack called Am Buachaille, off the cliffs at the western end of the bay. The name translates from the Gaelic as 'The Herdsman'. This sea stack must appear in more Highland tourist brochures than any other, even though it is well off the beaten track!

The beach at Sandwood is pristine, though there is inevitably a bit of detritus washed up by the sea. I make it about 2 miles from one end of the sand to the other. The scenery is absolutely splendid, and when the sun is shining it is hard to imagine a more beautiful and secluded spot anywhere in the world.

Dolphins can be spotted offshore, and on one famous occasion in 1900 a local crofter testified that he had seen a mermaid resting on a rock by the shore.

Don't forget to leave plenty of time for the return trek to Blairmore; its a good idea to leave extra time in case you are fatigued by the walk to the beach!

Sandwood Bay is one of those magical places that stay in your memory. 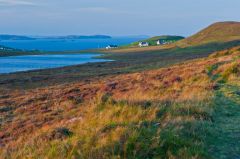 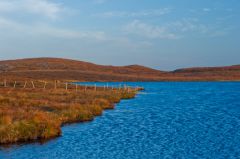 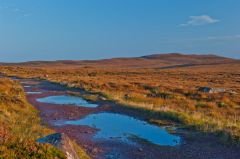 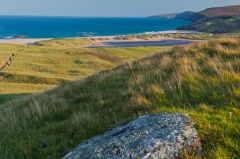 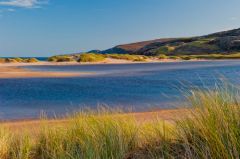 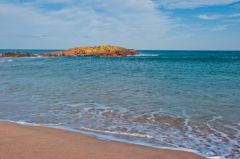 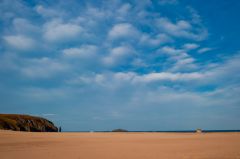 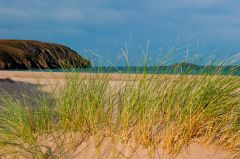 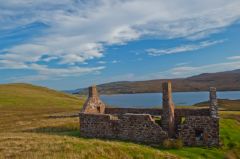 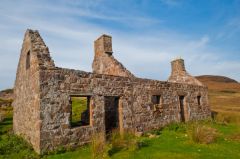 Nearby accommodation is calculated 'as the crow flies' from Sandwood Bay. 'Nearest' may involve a long drive up and down glens or, if you are near the coast, may include a ferry ride! Please check the property map to make sure the location is right for you.

More self catering near Sandwood Bay 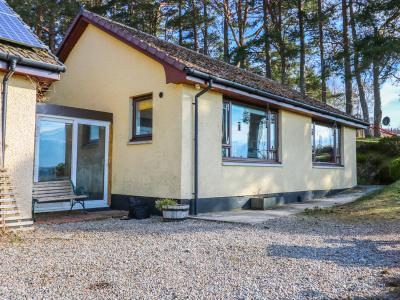 This cottage is located in the village of Spean Bridge near Fort William and can sleep four people in two bedrooms.
Sleeps 4 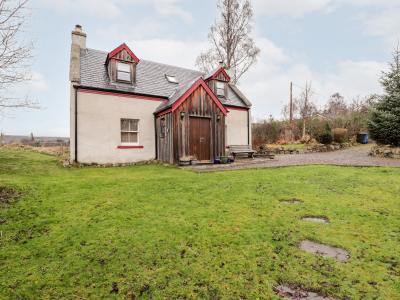 Bogindour Cottage is a lovely, detached cottage resting in Tore near Munlochy, Scottish Highlands and can sleep five people in three bedrooms.
Sleeps 5