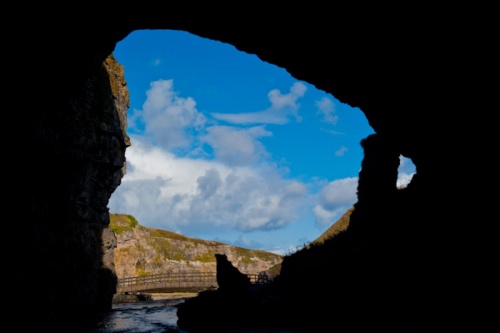 Smoo Cave is one of the most visited natural attractions in northern Scotland, a natural sea cave carved into high limestone cliffs near Durness, Sutherland. There are three natural chambers, one that can only be accessed by boat, and one where a waterfall thunders down from a sink hole high above.

The cave system is 200 feet long, 130 feet wide and stretches 50 feet high at the gaping main entrance. Smoo is a word of Norse origin, meaning cleft, or hole. The sea not only delved deep into the limestone cliffs, but carved out the largest entrance of any sea cave in Britain - more than 15 meters high.

One of the most famous accounts of a visit to Smoo Caves was published by Sir Walter Scott, who came here in 1814. Scott's diary noted that 'A water kelpie or an evil spirit of aquatic propensities could not have chosen a fitter abode'.

While the sea carved at one end, following the line of a weak fault in the underlying rock, Alt Smoo was opening up the rear of the cave.

There is a signed car park and toilets, with a series of wooden steps running down the cliffs to the shore. allowing access to the caves throughout the year. The huge main chamber gives access to a smaller second chamber where a thundering waterfall from a sink hole above sends cascades of water down in a torrent. The sink hole is fed by Alt Smoo, and you can see where the stream enters the sink hole from a fenced area near the car park.

A wooden walkway leads to a viewing platform where you can get a good look at the waterfall. I advise waterproof clothing here, as the spray can get pretty intense! The sound of the waterfall can be overwhelming if there is sufficient flow, and you can't hear yourself think!

Depending on the water table, this waterfall chamber can be a cloud of mist! From the second chamber, you can take a boat through a small opening into a third chamber. The third chamber lies beneath the croft house of Smoo Falls, opposite the car park on the far side of the road. That gives you an idea of just how extensive the cave system is!

To one side of the main opening is an ancient shell midden. There are paths along the cliffs and a trail to a fenced area where you can see the openings of three pot holes and the Sink Hole that feeds the waterfall below. 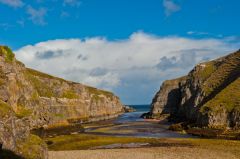 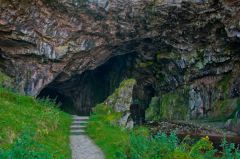 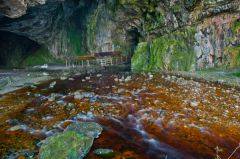 Nearby accommodation is calculated 'as the crow flies' from Smoo Cave. 'Nearest' may involve a long drive up and down glens or, if you are near the coast, may include a ferry ride! Please check the property map to make sure the location is right for you.

More self catering near Smoo Cave 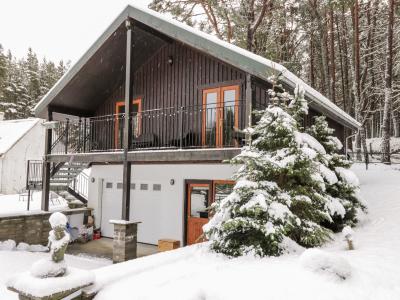 This first-floor chalet rests in Kingussie, in the Cairngorms National Park and can sleep four people in one bedroom and a sofa bed.
Sleeps 2 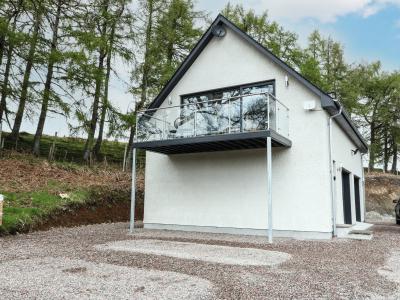