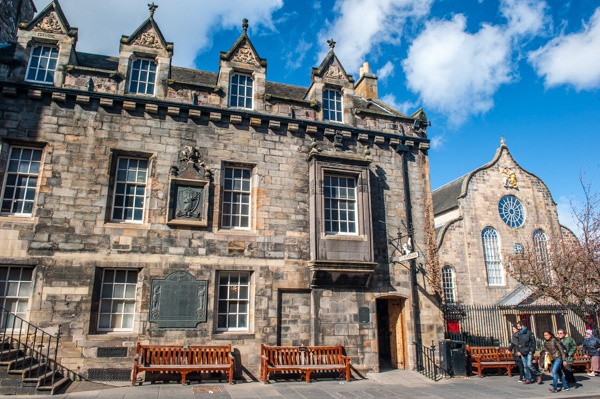 Here's a museum aimed low - at the ordinary working classes. The People's Story tells the tale of Edinburgh's people at work and play from the 18th century to the present day.

The museum is housed in the historic Canongate Tolbooth, built in 1591 as a combination civic hall and prison, used to collect taxes, administer the city and imprison malefactors. A large chamber on the first floor was used as a courtroom and for council meetings. Most of the remainder of the building was used as a prison. 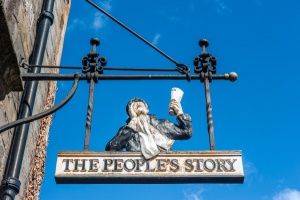 Thousands of people were imprisoned in the Tolbooth over the centuries, and several managed to escape. One story involves Donald McCulloch, who was incarcerated in 1795 for deserting from the army. He contrived to escape, and a reward of 1 guinea was offered for his capture. By all accounts he avoided capture, and his fate is unknown.

After the Burgh of Canongate became part of Edinburgh in 1856 the building was used as a public hall, police office, fire station, library, and a literary institute. The building was merged with the adjoining tenement and converted into a museum, becoming the People's Story in 1989.

The museum captures the lives of ordinary residents of Edinburgh through a series of historic tableaux re-creating scenes of daily life, from work to home life. There are special collections of objects related to Newhaven and Leith as well as Edinburgh itself.

One of the highlights is a very large collection of banners, most made for street marches and social protest, from political reform movements to trade unions. The connection with Edinburgh trades is very strong; there are a huge number of objects linked with various trades and 'friendly societies', such as costumes and ceremonial dress.

The Edinburgh Life Collection displays objects from life in Old Town and New Town, mementoes from King George IV's visit to the city, and an exhibition on Edinburgh's LGBT community. A fascinating exhibit looks at 'The Demon Drink', with objects from Edinburgh's brewing and distilling industries balanced with ephemera from the Temperance Movement.

Here you will find everything from religion to the Home Front in WWII; the scope of the museum is exceptional and takes in what it was like to live in Edinburgh over the last 300 years.

See a recreation of a cooper's workshop, and find out what it was like to be a servant, a fisherman, or a biscuit-maker. Learn the story of the Co-operative movement, and how Edinburgh was a centre of the printing industry.

The 'At Home in Edinburgh' Collection looks at daily life over the last few generations. See a recreated wartime kitchen, and exhibits of household objects such as appliances, tableware, televisions, chairs, and phonographs. It is life as your parents or grandparents would remember it.

The People's story is a fascinating museum of ordinary life, housed in one of Edinburgh's most important historic buildings. Admission is free, and there are extended opening times during the Edinburgh Festival.

More self catering near The People's Story Museum

More bed and breakfasts near The People's Story Museum