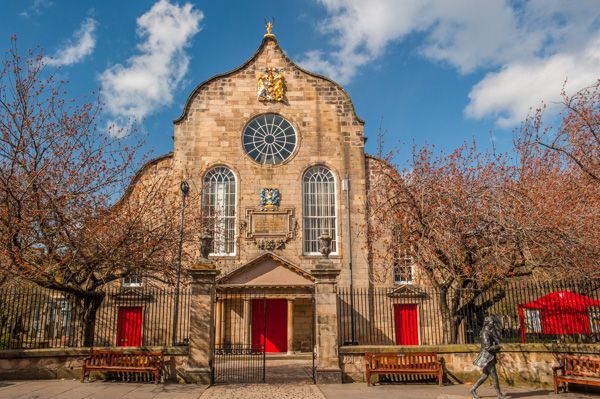 This historic church stands on Edinburgh's Royal Mile, just east of the Royal Palace of Holyroodhouse. The church was founded in 1688 and the attractive Dutch-style building with its striking gable end was completed in 1691. Money for the church came from a bequest from a wealthy merchant named Thomas Moodie, who left a bequest to fund a new church in 1649.

It was almost four decades before James VII declared that the money be dedicated to build the Canongate Kirk. James was well aware that residents of Canongate had been accustomed to attending the Abbey Church beside his royal palace of Holyroodhouse. James wanted the Abbey Church to be the new chapel of the Order of the Thistle, so he gave the money to erect a new church on Canongate.

The most striking feature of the new kirk was its curious Dutch gable and a portico flanked by Doric columns. The unusual design was implemented by master mason James Smith. The design was a cruciform plan, unusual for a church of this period in Scotland. The interior is elegant but not overly ornate, with a Royal Pew at the front of the nave. The Kirk was the setting for a royal marriage in 2011 when the queen's granddaughter Zara Phillips married rugby star Mike Tindall. 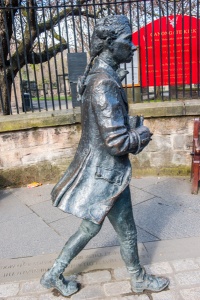 Robert Ferguson statue
outside the Kirkyard

Until the 19th century the Canongate was a separate parish from Edinburgh. When James VII decided to adopt the abbey church as a Chapel Royal, residents worshipped at Lady Yester's Kirk in High School Wynd. An oddity in parish boundaries meant that after Canongate Kirk was established the Kirkyard acted as a burial place for soldiers serving at Edinburgh Castle. Many of these soldiers are buried in the northern part of the Kirkyard.

Just as interesting as the church itself is the Kirkyard, where numerous important residents of Edinburgh were laid to rest. Economist Adam Smith lies here, as does philosopher Dugald Stewart.

An old tradition suggests that David Rizzio, the murdered secretary of Mary, Queen of Scots, is buried here. The story seems unlikely, for it stretches the imagination that a Catholic would be reburied in a Protestant churchyard over a century after his death. A plaque on the east wall of the church stands above a very worn gravestone, and proclaims,

"Tradition says that this is the grave of David Riccio 1533-1566 Transported from Holyrood."

A more modern burial is that of poet Robert Ferguson, whose bronze statue stands just outside the Kirkyard gates. Then there is the grave of William Wilson, who fought with Bonnie Prince Charlie in the 1745 Jacobite rebellion before joining the Black Watch and rising to the rank of Colonel.

One of the more interesting memorials is The Coachman’s Stone, with a carving depicting a coach and horses crossing a bridge. Also buried here are John and James Ballantyne, publishers of Sir Walter Scott's works. One of the most ostentatious memorials is that of Sir William Fettes, a merchant and Lord Provost of Edinburgh.

Just inside the kirkyard entrance is the Canongate Mercat Cross, erected in 1128.

The Kirk is usually open to visitors daily from May-September and there are often volunteer guides on hand to help visitors get the most out of the church and the churchyard. Access is very easy from the tourist route along the Royal Mile, and the Kirk is a very short distance from the Palace of Holyroodhouse. 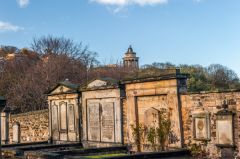 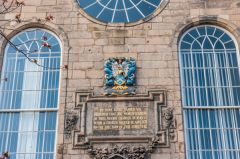 More self catering near Canongate Kirk