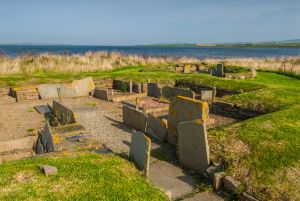 Barnhouse is a Neolithic village located on the shores of Loch Harray beside the Stones of Stenness circle and just a short distance from the Ring of Brogar.

The village was inhabited from about 3200 BCE, roughly 450 years before the more famous settlement at Skara Brae. The dates suggest that this may have been where the builders of Maes Howe, Brogar, and Stenness lived. There are several different sizes of huts, but nothing beyond the foundations remain.

The remarkable thing about Barnhouse is that the houses seem to have been intentionally destroyed at the end of their habitation.

The site was discovered in 1984, and subsequent excavations revealed a settlement of 15 houses. The houses vary in size, but all follow the same pattern; there is a round base, probably supporting a roof of timber topped with turf. The walls were clad with turf as well, and appear to have been free-standing, compared to Skara Brae, where the houses are supported by exterior midden piles.

The interior of each hut has a central hearth, box-beds and stone furniture. Two of the buildings at Barnhouse are considerably larger than the others, suggesting that they were used as the residence of an important person in the village. Interestingly, the hearth in the largest hut is very similar to the one at the centre of the Stones of Stenness henge.

One theory is that the settlement was made for artisans working on the stone circle and henge, and once they had finished the project, they moved on to another project, like itinerant craftsmen in the Middle Ages, and their huts were destroyed.

Another theory is that the larger huts were used as a meeting place or ceremonial centre associated with the henge; perhaps a place used by priests. Certainly, Barnhouse is set in the extraordinary sacred landscape around Harray, close to Maes Howe, Stenness, and the complex of ceremonial sites at Brodgar.

Barnhouse is extremely easy to reach. Park at the Stones of Stenness and follow the short, signposted path to the shore of the loch. 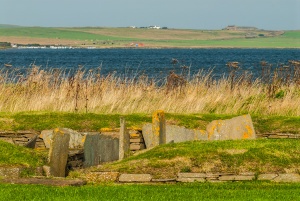 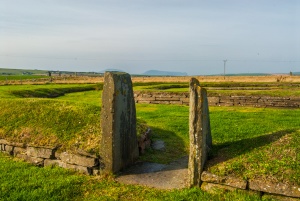 Entrance to the largest hut 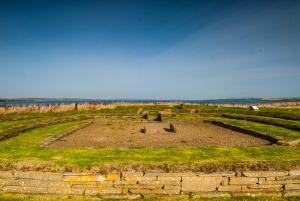 Looking across the largest hut enclosure 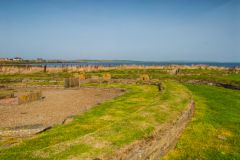 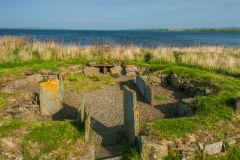 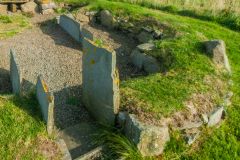 Nearby accommodation is calculated 'as the crow flies' from Barnhouse Neolithic Settlement. 'Nearest' may involve a long drive up and down glens or, if you are near the coast, may include a ferry ride! Please check the property map to make sure the location is right for you.