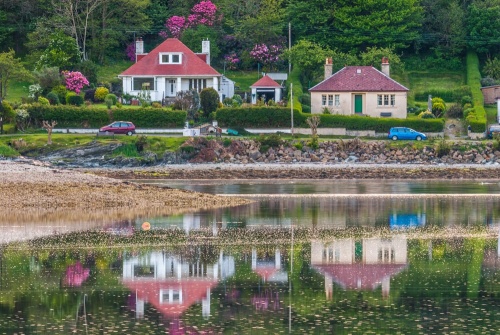 Lochranza is the only sizeable village in the northern part of Arran, set on a low promontory jutting out into the beautiful sea loch of Loch Ranza and overlooked by Torr Meadhonach, towering 1089 feet above sea level.

The village is home to Lochranza Castle, one of the most picturesque castles in Scotland, and to the Arran Distillery, distillers of the popular Arran Gold single-malt whisky.

Lochranza was the inspiration for Sir Walter Scott's poem, The Lord of the Isles, published in 1815, telling the story of King Robert Bruce.

On fair Lochranza streamed the early day,
Thin wreaths of cottage smoke are upward curl'd
From the lone hamlet, which her inland bay
And circling mountains sever from world. 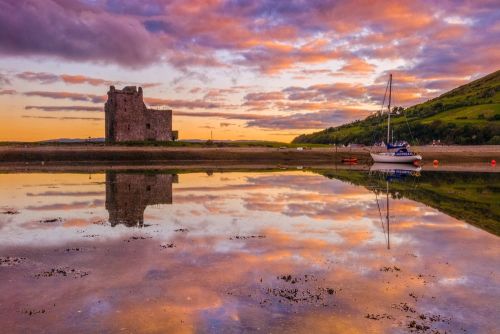 This iconic waterside castle was begun sometime in the late 13th or early 14th centuries on a narrow stretch of low-lying land stretching out into the loch. The castle was enlarged in the late 16th century, likely by one of the Stewarts of Menteith.

The roofless ruins rise to a height of three storeys. The site is now in the care of Historic Environment Scotland, formerly Historic Scotland. It is usually open seasonally. 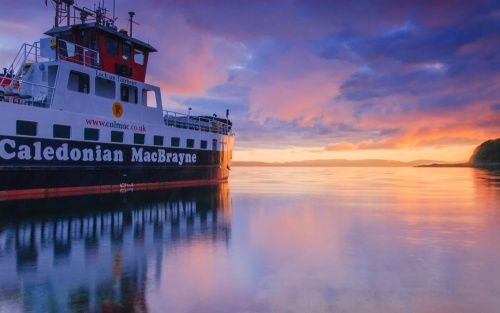 Immediately west of the village is the ferry terminal, where Caledonian MacBrayne vessels take cars and foot passengers to Claonaig, across the Sound of Bute, and to Tarbert, at the southern end of Loch Fyne.

If you follow the road south from the ferry terminal, you come to Catacol, a small village famous for its 'Twelve Apostles' terrace of 19th-century fishermens' cottages facing out over Catacol Bay to Kintyre.

Lochranza is famous for its resident herd of red deer, which can often be seen gathering by the shore at dawn and dusk. We were able to pass within a few feet of the deer on our way to photograph the castle at dawn.

On the northern shore of the loch you can often spot grey seals sunning themselves, and overhead you can spot golden eagles. Otters are also regularly found around the loch.

Lochranza has an undesirable reputation as the most shaded village in the world, due to the shadows cast by the surrounding hills, and also as the village with the fewest hours of annual sunshine in the UK. 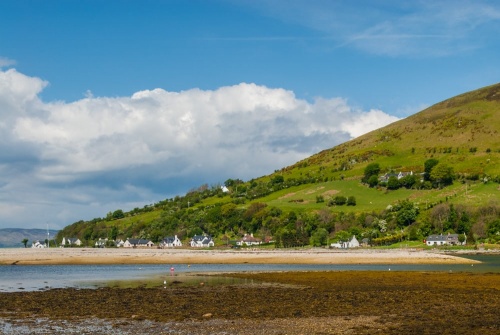 The north shore of Loch Ranza

Since 1995, Lochranza has been home to the Arran Distillery, makers of a single-malt whisky. The distillery is one of the largest employers in the area and has two locations, one at Lochranza and another at Lagg, in the south of the island.

The distillery visitor centre was opened in 1997 by Her Majesty The Queen and is a multiple winner of the national 'Distillery Visitor Experience of the Year'. You can take tours of the distillery and taste over 350 unique varieties of Scotch whisky at the bar in the Lochranza Hotel.

If you can still stand up straight after visiting the distillery, you can enjoy a nine-hole golf course. 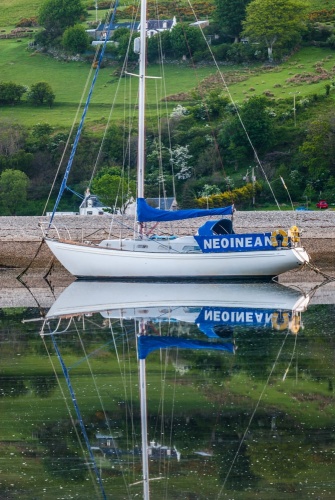 A sailboat on the loch

By the side of the minor road to Catacol is a simple gravestone to a sailor known as John McLean. It is a reminder of a poignant tale that dates back to 1854. There are several versions of the story.

One says that McLean was a crewman aboard a ship who died of suspected cholera. When his fellow crew asked if they could bury McLean in the Lochranza churchyard the villagers refused, fearful that his corpse might bring the disease with it. They asked at Catacol, and were refused again, so they buried him halfway between the two villages.

Another version says that McLean grew ill aboard ship, and when his crewmates realised the danger, they put him ashore. He asked for help in Lochranza and was turned away, walked to Catacol and was refused again, so he sat down and died between the two villages.

Passers-by took a pebble from the beach and placed it beside the gravestone as a mark of respect, and perhaps a token of apology. You can still see the pile of beach stones today. 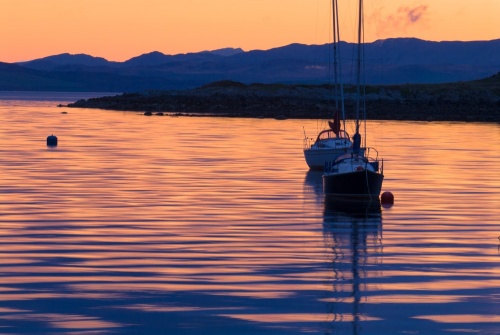 The village is home to an outdoor field study centre, offering a range of outdoor activities and family activity holidays for over 100 people. The Centre is operated by a community trust and offers courses in local geology, geography, and biology as well as exciting outdoor activities including archery, canoeing, bushcraft, cycling, gorge walking, orienteering, and raft building.

Aside from the hotel, there is a youth hostel and a large number of self-catering cottages in the area. We stayed at a cottage just down the west coast of Arran at Imachar, and were able to enjoy the short drive to Lochranza numerous times.

Getting to Lochranza is easy; just follow the A841 coastal road from Brodick, signposted to the village and the ferry terminal.

Nearby accommodation is calculated 'as the crow flies' from Lochranza. 'Nearest' may involve a long drive up and down glens or, if you are near the coast, may include a ferry ride! Please check the property map to make sure the location is right for you.

More self catering near Lochranza

More bed and breakfasts near Lochranza