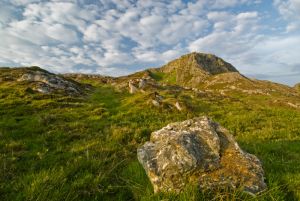 A world apart - the Isle of Colonsay is a gem off Scotland's west coast. The island is no more than 10 miles from tip to toe, but in between lies an extraordinary landscape of rock, moorland, and stunning, sandy beaches. The chief attraction is Colonsay House Garden, a beautiful garden surrounding the 18th-century manor house.

A mile away is Kiloran Bay, home to one of Scotland's most famous beaches, a stretch of white sand that would put the resorts of the Mediterranean to shame.

At the other end of Colonsay is The Strand, a sandy straight that separates Colonsay from the island Oronsay. The Strand is laid bare at low tide, allowing visitors to walk a magical mile across the sand to Oronsay, where the ruins of a medieval priory stand in a nature reserve famous for its birdlife and resident seal population.

Before the priory stands a carved cross, and within one of the old priory buildings is an exhibition of medieval grave slabs recovered from the site. This is a magical, timeless place, with a pace of life so much at odds with today's modern cities. Standing stones are dotted around the islands, and the ruins of prehistoric burial sites.

A comparative newcomer to these shores was St Columba, who is said to have landed here as part of his mission to spread Christianity to the north. A small well-head above a natural spring north of Kiloran Bay is said to have been crafted by Columba's own hands.

But Colonsay is not all about the past! There are local arts and crafts to enjoy, and the island has its own micro-brewery. There is even a nine-hole golf course near the small airport - though you have some unusual 'hazards' on the course, as sheep wander across the grass.

I can't recommend Colonsay highly enough - if you fancy getting away from it all, this beautiful Scottish island may be just what you need!

Nearest Accommodation to Isle of Colonsay:

Nearby accommodation is calculated 'as the crow flies' from Isle of Colonsay. 'Nearest' may involve a long drive up and down glens or, if you are near the coast, may include a ferry ride! Please check the property map to make sure the location is right for you.

More self catering near Isle of Colonsay >>

More Hotels near Isle of Colonsay >>

More bed and breakfasts near Isle of Colonsay >>