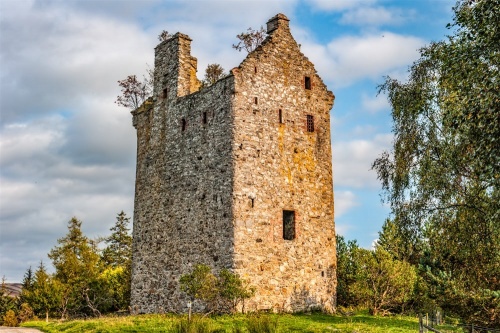 Invermark Castle is a four-story tower house in remote Glen Esk, begun in the early 16th century. The castle stands beside the River North Esk in a picturesque location near the eastern end of Loch Lee. The location defended the southern end of the pass from Deeside, at the point where Glen Mark and Glen Lee join to form Glen Esk.

The oldest part of the castle we see today dates from around 1526, though the first written record comes from 1554. There was a fortified house at Invermark as early as the 14th century, though that first castle may not have been on the same site.

The castle was built by the Lindsays of Crawford to deter Highland raiders who regularly descended on Glen Esk to steal cattle and sheep. 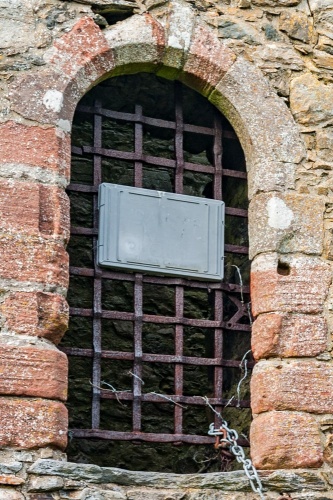 The first-floor entrance and iron yett

In one medieval raid half the livestock in the glen was stolen and 5 local men died trying to stop the raiders.

Invermark Castle is neither as large nor as impressive as the Lindsays' main residence of Edzell Castle, but it is still an impressive fortified tower, rising 65 feet high, on a rectangular plan measuring 38 feet long by 27 feet across.

The original castle stood three storeys high, with a parapet walk on the roof. In the early 17th century another storey was added, with an attic and a two-storey angle tower. A pair of large chimney stacks rise above roof level, with narrow windows giving light to the attic level.

Like many fortified houses, there was no ground-level entrance. Instead, access to a first-floor entry was by way of an external wooden stair that could be hauled up out of the way when danger beckoned. Alternatively, the entrance may have been reached via a drawbridge from the roof of a nearby outbuilding. 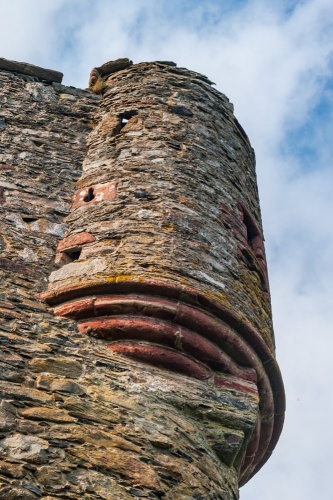 The entrance was defended by an iron yett, or latticed door, giving access to the main hall. A local tradition says that the yett was made with iron mined in Glen Esk, but, if true, it must have been made for a different doorway, as the size does not fit the doorway opening.

A smaller chamber was built off the hall, and a stair led down to a vaulted storage area at ground-floor level. A turnpike stair led from the first floor to the upper two floors, but the stair is no longer in existence.

The castle was still be repaired in 1729, but it seems to have been allowed to fall into decay shortly after that time.

You can see the partial remains of outbuildings to the east and south. In 1803 stone from these outbuildings was used to build the nearby parish church, a short distance east of the castle.

There is no access to the interior, but Invermark Castle is a striking example of a typical Scottish tower house, set in a beautiful countryside location. 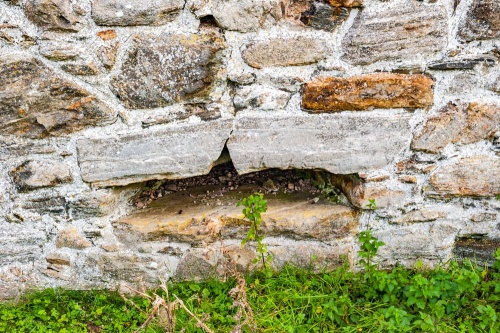 The most infamous Lindsay to be linked to Invermark Castle is Sir David Lindsay of Edzell. In 1607 Lindsay was forced to take refuge at Invermark after murdering his relation, Alexander Lindsay, 1st Lord Spynie, in what was probably a case of mistaken identity.

The origin of the tale goes back to 1605, when David Lindsay, 12th Earl of Crawford, murdered his cousin, Sir Walter Lindsay of Balgavie, Sir David's uncle. In true Highland tradition, Sir David schemed to get revenge on the murderous Earl.

On 5 July 1607 Sir David and a band of his supporters attacked and killed Lord Spynie in the street outside his Edinburgh residence when Spynie was out for an after-dinner stroll. Whether the attack was truly a case of mistaken identity or simply a tit-for-tat attack on the Earl's relative, we will never know. 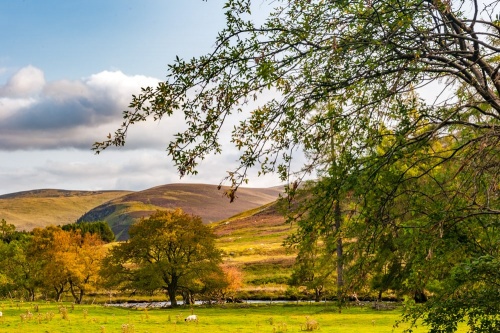 The castle stands in a beautiful countryside setting

Sir David Lindsay went into hiding at Invermark, and petitioned King James VI for clemency, making the extraordinary claim that the murder had been accidental. Quite how he expected the king to believe that shooting Lord Spynie and stabbing him multiple times with swords was an accident is debatable.

King James granted Lindsay a pardon for his crime, on the condition that Lindsay give a large part of his estates to Spynie's surviving children, along with the sum of 4,000 marks.

Invermark Castle also served as a temporary refuge in 1746 when James Carnegie, Lord Balnamoon, sheltered here following the Battle of Culloden, where he had fought for Bonnie Prince Charlie. Carnegie also took refuge from government soldiers in a cave further up Glen Mark, where local residents brought him food and warned him when government troops were near. Carnegie was eventually pardoned. 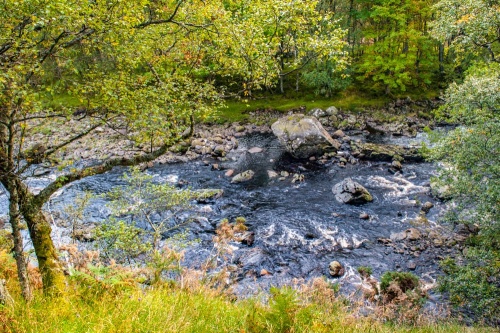 The Water of Lee runs past the castle

Invermark Castle is at the eastern end of Loch Lee, reached by a minor road from Edzell. The road turns off the B974 just north of Gannochy and follows the course of the River North Esk for approximately 30 miles. Just before you reach the parish church there is a paved parking area on the right.

From there, simply follow the road, cross over the Burn of Branny and the Water of Mark, until the pavement ends. Stay on the gravelled road and you will quickly come to the castle. From the car park to the castle is no more than 400m and will take 5 minutes easy stroll.

About Invermark Castle
Address: Glen Esk, Edzell, Angus, Scotland, DD9 7YZ
Attraction Type: Castle
Location: The castle stands at the end of the minor road to Glen Esk from Edzell. There is a car park near the parish church, followed by a short walk.
Location map
OS: NO442804
Photo Credit: David Ross and Britain Express

More self catering near Invermark Castle

Self Catering near Edzell