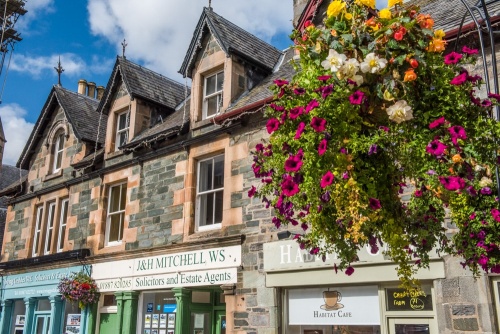 The pretty Perthshire town of Aberfeldy lies on the south bank of the River Tay about three miles east of Loch Tay itself. The town name comes from the Gaelic Abair Pheallaig, or 'the mouth of Pheallaig Burn'.

Though the area was settled at least as long ago as the Iron Age, by the early 18th century there was little here beyond a few scattered hamlets on the banks of the Tay. All that changed in 1733 when General George Wade built a bridge across the Tay as part of his remit to improve transportation in the Highlands.

Wade was tasked by the British government to build over 250 miles of military roads and 40 bridges to aid troop movements in an attempt to quell popular uprisings in support of the Jacobite cause since most of the Highlands supported the exiled Stewart monarchs. 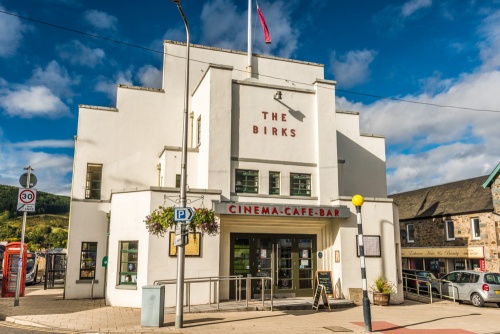 Jacobite rebellions in 1689 and 1715 made it clear to the government that they needed a good transportation system to move troops and supplies around the Highlands.

As it turned out, it was Bonnie Prince Charlie who made the best use of Wade's roads and bridges during the 1745 Jacobite Rebellion, but Wade was not to know that in 1733. He called in Scotland's foremost architect William Adam to design the Tay Bridge at Aberfeldy.

Adam's son Robert is the more famous of the two men for his Palladian country house designs, but in his day William Adam was regarded as the best that Scotland had to offer, a testament to how important Wade considered the Tay Bridge to be.

The result was General Wade's finest accomplishment, a lovely five arched bridge stretching 400 feet from bank to bank, decorated with obelisks over the centre span and pyramids at each end. Though it was intended to carry military cats, horses, and foot soldiers, Wade's Bridge still carries road traffic today, a testament to William Adam's design.

It was Wade's Bridge that 'made' Aberfeldy, and turned the scattered hamlets into a growing town. 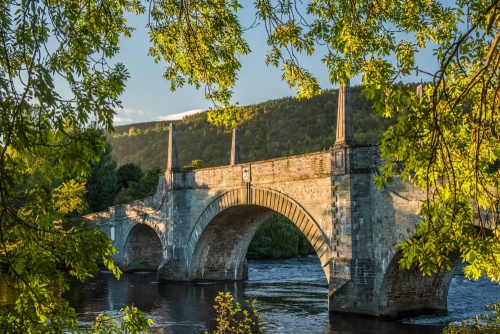 In 1740, shortly after the bridge was complete the Black Watch Regiment was gathered for the first time in a meadow on the west bank. In 1887 the Black Watch Memorial was erected to celebrate Queen Victoria's Jubilee. The memorial stands on the east bank across from the meadow where troops were first marshalled because the original site is subject to flooding.

Around 1799 a water mill was built to process cotton, followed by a grain mill in 1825, using the power of water rushing down Moness Burn. The grain mill has now been restored and serves as a cafe, community centre, and the region's largest bookshop. The restored mill wheel still functions, though now it mills oatmeal for Dewars World of Whisky on the eastern edge of town.

The distillery was built in 1896 and is one of the area's most popular tourist attractions. Guided tours allow visitors to watch whisky being distilled and there is a heritage centre exploring the long history of whisky in the Tay region. 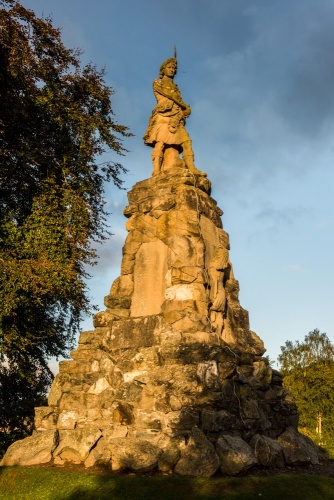 Aberfeldy has a long history of whisky distilling, though until the middle of the 19th century most distillation was done with illegal stills run by local families.

One of the town's more recent highlights is the Birks Cinema, a beautiful 1930s Art Deco building that has been completely refurbished to provide a state of the art 3-D cinema, cafe, bar and community gathering place. 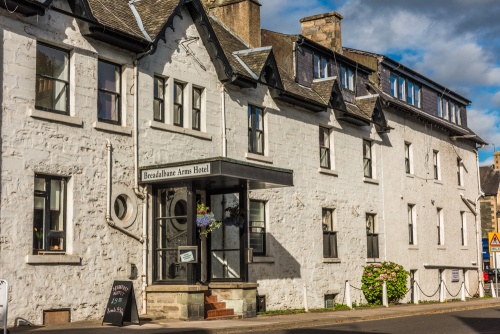 If you cross Wade's Bridge and follow the B846 through the village of Weem you come to Castle Menzies, the seat of Clan Menzies for over 400 years. Castle Menzies was closely involved with the Jacobite Rebellion of 1745. Bonnie Prince Charlie rested at the castle on his retreat north.

Today you can visit the room where he stayed, which has been furnished just as it would have been during the Prince's stay. Just four days later Bonnie Prince Charlie left, his foe the Duke of Cumberland stopped here. The two men would meet in battle at Culloden just a few days later, a battle that effectively ended the Jacobite dream. 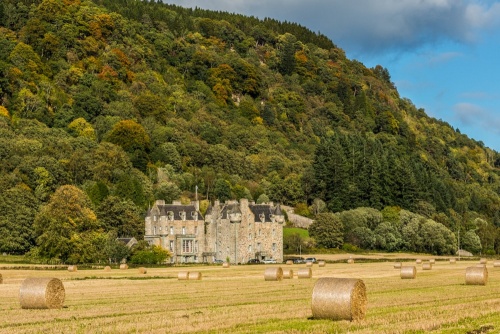 Beside Castle Menzies is Weem Forest, planted by the Menzies family to provide a scenic backdrop for their home. A woodland trail leads up the hillside to St David's Well, a holy well established by St Cuthbert in the 6th century. In the 15th century, the heir of Castle Menzies gave up his worldly life and became a hermit, living out his life beside the holy well.

In Weem itself is the Old Kirk, which since the middle of the 19th century has served as the Menzies family mausoleum. Within the Old Kirk are several ancient crosses brought from the Celtic monastery at Dull, a few miles to the west. Also inside the church is a St Cuthbert's Cross, which used to stand by St David's Well.

Poet Robert Burns visited Aberfeldy in 1787 and explored the Den of Moness, a wooded gorge along Moness Burn on the edge of town. He was so inspired by the natural beauty of the woodlands and the rushing water that he penned one of his most popular poems, The Birks of Aberfeldy ('birks' being the Gaelic word for birch trees).

You can visit the natural rock seat where Burns sat, known as Burns' Cave, and see the dramatic Moness Falls. The woodland is now preserved as a nature reserve with footpaths creating a lovely circular walk taking in the waterfalls from both sides. 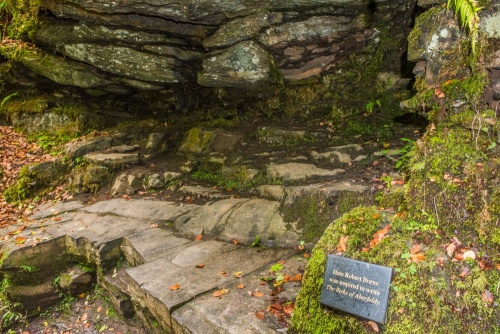 Robert Burns' Cave in the Birks of Aberfeldy

Near the entrance to the Birks of Aberfeldy is a cup-marked stone brought here for preservation when a nearby housing estate was being built. The Moness Cup-Marked Stone is carved with at least 15 depressions or 'cop marks'. No one knows what these marks mean, though theories range from a map to a form of ritual observance.

A few miles west of Aberfeldy on the road to Kenmore is Bolfracks Garden, a wonderful hillside garden built around an 18th-century house once used by the factor of Taymouth Castle. Bolfracks offers stunning views across the Tay Valley and incorporates an early 18th-century mausoleum of the Menzies family. The garden is best known for its unusual plant species and features a rose garden and lush herbaceous borders.

Near Bolfracks is Croft Moraig Stone Circle (sometimes spelled in one word as Croftmoraig). To call it a stone circle is a bit misleading, Croft Moraig is a combination of a stone circle, earthwork ring, and arrangement of recumbent stones. It was built in at least three stages over a span of 1000 years and the arrangement of the stones are thought to create an astronomical alignment.

A few miles beyond Croft Moraig is the Scottish Crannog Centre on the south side of Loch Tay. Here you can explore an authentic recreation of a traditional Scottish crannog, a manmade island structure on stilts. Learn how people built crannogs and experience ancient skills like weaving, fire-starting, and woodturning using traditional hand-powered tools.

A few miles from Aberfeldy on the north bank of the River Tay is Cluny House Garden, one of the best places in Britain to see the elusive red squirrel. The garden covers six acres above the Tay and features a wonderful collection of Himalayan plants and Asiatic primroses. Many of the plants were grown from seeds gathered in Bhutan at high altitudes. The garden features a Wellingtonia (Sequoiadendron) with the widest girth of any conifer in Britain at over 11 metres (36 feet). 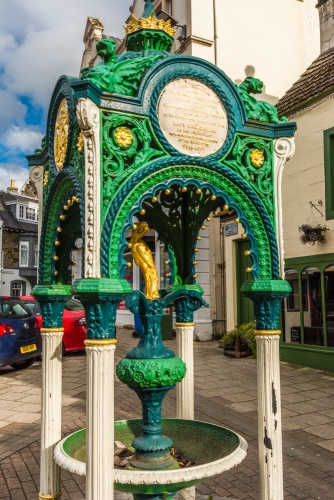 Several miles east of Aberfeldy is the isolated church of St Mary near Grandtully. This low stone building looks unimpressive from the outside, but walk into the interior and your jaw will drop in amazement, for the church's vaulted ceiling is painted with a profusion of glorious 1630 murals depicting Biblical and heraldic themes. The murals are without equal in Scotland and well worth an excursion to see. 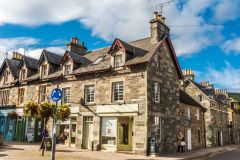 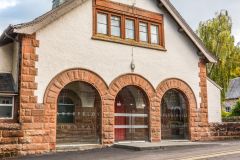 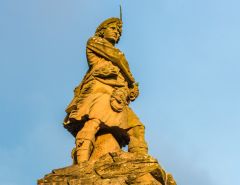 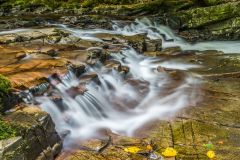 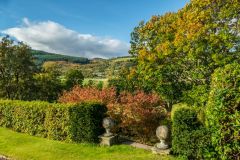 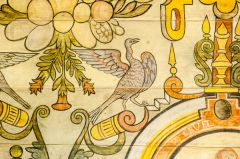 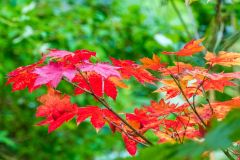 About Aberfeldy
Address: A827, Aberfeldy, Perthshire, Scotland
Attraction Type: Town
Location: At the junction of the A826 and A827 on the south bank of the River Tay.
Location map
OS: NN854490
Photo Credit: David Ross and Britain Express

More self catering near Aberfeldy

More bed and breakfasts near Aberfeldy