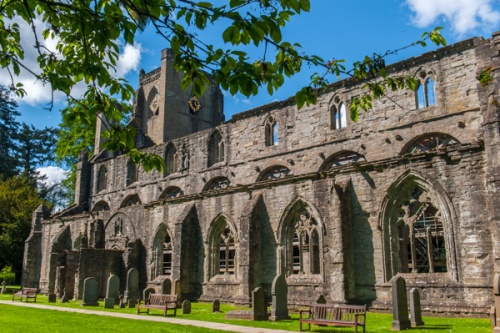 Dunkeld Cathedral is one of the finest medieval churches in Scotland and it stands in a beautiful location beside the River Tay. The 15th-century nave is roofless, but the east end lives on as the parish church and features a well-preserved 14th-century choir.

This lovely site beside the peaceful River Tay was visited by the early saints Mungo and Columba. The most visible remnant of early Christian presence here is the Apostle's Stone, a beautifully carved 9th-century cross slab in the sanctuary. Dunkeld was first established as a cathedral in 1107 by Alexander I, but the oldest parts of the current church date to the 14th century.

The cathedral is built on quite simple lines, with a long aisled nave leading to a choir and sanctuary, or chapter house. At the north-west corner is a striking tower, added in the 15th century, and boasting wall paintings dating to about 1520, including one painting of the Judgement of Solomon.

The church only partially survived the Reformation; the whole west end was allowed to crumble into a roofless ruin, but the chancel and sanctuary continued to serve as the parish church. The nave and tower are now cared for by Historic Scotland, while the east end is in the hands of a local charity group. 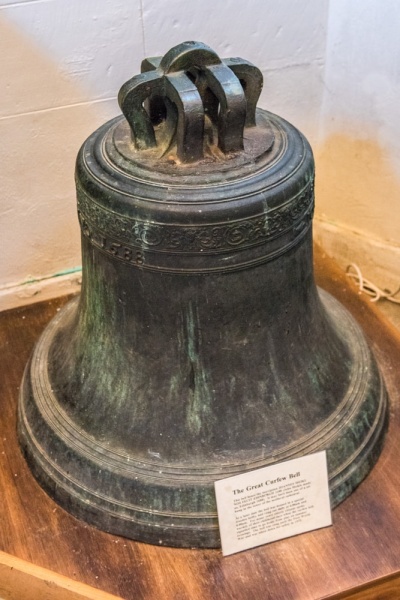 While the ruinous west end of the cathedral has plenty of interest, most of the historical features are in the eastern arm of the cathedral. In the chapterhouse, you will find the Apostle Stone, which is a rather misleading name.

One face of the stone is carved with a row of human figures which are probably not religious at all, but part of a battle scene. Other parts of the carvings represent the Biblical tale of Daniel in the lion's den and the story of the loaves and fishes. Though the carving is quite worn, you can make out most of the figures quite clearly. The style of the carving has been compared to high crosses in County Kildare, Ireland. 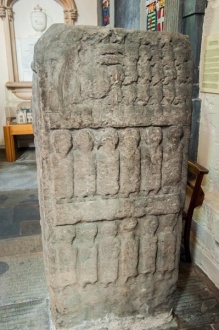 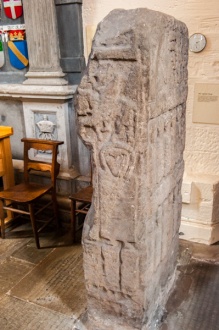 Side view of the
Apostle Stone

Also in the chapter house is a curfew bell dated to 1688 and the tombstone of Niel Gow, famed fiddler to the Dukes of Atholl (1727-1807). The tombstone comes from Little Dunkeld Church, across the river, where Gow is buried.

Taking up most of the south wall is a colourful monument to John, Marquess of Atholl (d. 1703). This fascinating monument is embellished with coats of arms and has a rather florid Latin inscription which tells us that the Marquess was 'worn out in the service of his country' and was esteemed by the church as 'ever zealous for the purer (Reformed) faith'.

Between the curfew bell and Niel Gow's gravestone is a very tall carved cross slab dating to the 9th or 10th century. This cross slab was discovered being used as a gatepost and was moved inside the chapter house to preserve it.

The Wolf of Badenoch

At the east end of the choir, hidden behind the altar screen, is a headless effigy of a 14th-century bishop, thought to be Bishop William Sinclair, who died in 1337. The most impressive memorial by far is that of Alexander Stewart, Earl of Buchan, known to history as the fearsome Wolf of Badenoch.

Buchan, who died in 1405, earned his ferocious reputation by sacking Elgin Cathedral and burning the city to the ground in 1390. The tomb and effigy are remarkably well preserved, and stand near a wonderful monument to servicemen of the Black Watch, designed in 1872 by Sir John Steell.

Also in the choir is a memorial to Rev. John Robb, a minister for Dunkeld and Dowally. Robb was taking a sea voyage in the hope of improving his failing health. He was aboard the SS Forfarshire when it ran aground on the Farne Islands off the Northumberland coast on 7 September 1832.

Survivors of the Forfarshire wreck were famously rescued by the Victorian heroine Grace Darling and her father William. Robb was one of those unfortunate passengers who died in the wreck before the Darling's could reach the wreck site. He lies in Bamburgh churchyard, not far from the grave of Grace Darling herself. 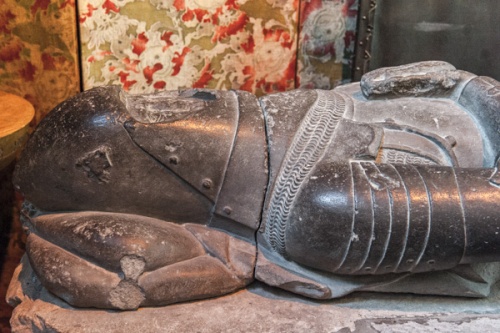 The Wolf of Badenoch's effigy

The cathedral originally stood at the centre of the ancient burgh of Dunkeld, but it became caught up in the tumult of the Jacobite cause in 1689.

A band of 800 Lowlanders used the walls surrounding the cathedral quarter as their defence against an army of some 5000 Jacobite soldiers. The defenders used so much ammunition that they had to strip lead from the cathedral roof to make more musket balls.

In a ferocious battle lasting 16 hours, the Jacobites attacked the cathedral again and again and were repulsed. Despite their overwhelming superiority of numbers, the Jacobites could not overcome the defenders of Dunkeld, and the battle proved a decisive blow to the Jacobite cause.

After the battle, the centre of the burgh was moved to its current location east of the cathedral, which now stands in wide lawns running down to the river.

In the churchyard to the north of the cathedral is an information panel facing the open field where most of the fighting took place. 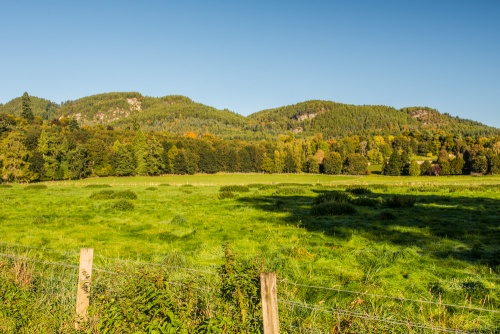 Battle of Dunkeld battlefield site, behind the cathedral

Dunkeld Cathedral is well signposted from the A9 and the A923 (Bridge Street). There is no dedicated parking area so visitors arriving by car will have to park in either the main village car park on Atholl Street or the riverside parking area on Boat Road (A984), at the north end of the bridge. Both parking areas are pay and display and both are an easy 5-minute walk to the Cathedral. 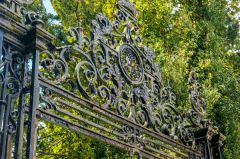 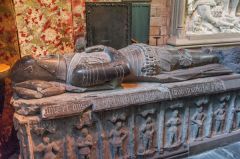 More self catering near Dunkeld Cathedral >> 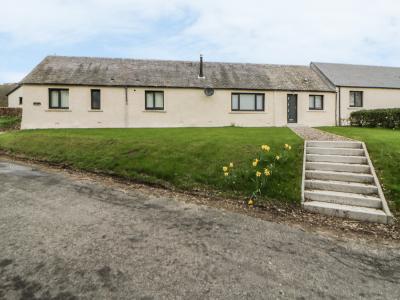 This single storey cottage rests near the Scottish town of Dunkeld and can sleep four people in two bedrooms.
Sleeps 4 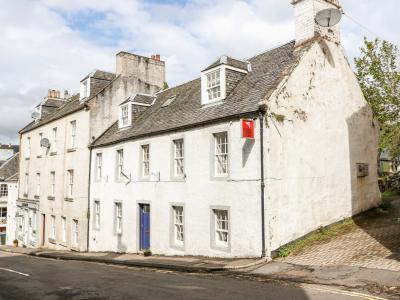 This cottage rests in Dunkeld, Scotland and can sleep eight people in three bedrooms.
Sleeps 8