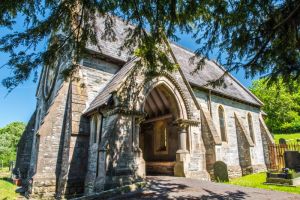 St Llawddog's Church in Cenarth is a Grade II listed building, erected in 1872 to replace an earlier medieval church. The church has a 12th century font carved with 5 striking heads. It is named for a 7th century saint whose holy well can still be seen nearby.

The church is named after St. Llawddog, a 6th century patron of four churches in the diocese of St. David's. It belonged to the Deanery of Emlyn during the medieval period before it was appropriated to the Bishops of St David's Cathedral. The 1872 church replaced an earlier church fallen into ruin.

Though the church is relatively modern, the site was important long before the first church was erected; it served as the site of a bishop's house for the Cantref of Emlyn.

Outside the south west corner of the church is an ancient inscribed stone, with an inscription in faded Latin reading 'CVRCAGN -/FILI ANDAGELL', which translates as 'of Curcagnus son of Andagellus'. The stone stood for many years in a nearby farm field and was moved to the churchyard in 1894. It is thought to date to the 5th or early 6th century. 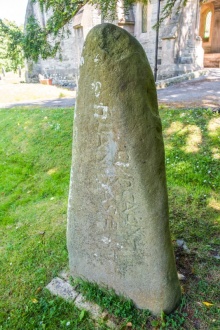 According to the 'Bye-Gones' journal of 1898 the stone was taken from its original position by General Jones, who placed it over the grave of the charger that had served him for many years on campaign. It was later moved to the churchyard by the Earl of Cawdor.

The most interesting historic feature of the church is the font, dated to the late 12th or early 13th century. The font was used for a time as a pig trough, and was brought to Cenarth in the 19th century from St Tysilio's Church in Llandisiliogogo. The bowl is circular, about 52 inches around, 12 inches deep and 14 inches diameter. There are 5 masks of human heads, including a pair that are doubled. The heads are arranged at equal distances around the bowl and are connected by a serpentine moulding.

The original 13th century font of St Llawddog's church was removed in the 19th century and erected in the vicarage garden before it was transferred to Sarnau and then to St Michael's church in Penbryn.

On the south bank of the River Teifi, just downstream from the falls, is Ffynnon Llawddog (St Llawddog's Well), a holy well connected to the saint. Llawddog, or Ludoc, was a 7th century saint, born into a privileged position as the son of the King of Usk. Lladdog was said to have performed many miracles, and is most famous as Abbot of Bardsey.

Just 100 metres away is the ruinous castle motte of Parc-y-domen, which may have been built at the same time as the medieval church.

The church is usually open daily during the summer months and at other times by arrangement. It was open when we visited on a sunny afternoon in May. 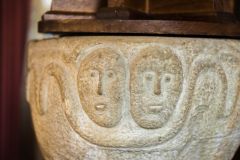 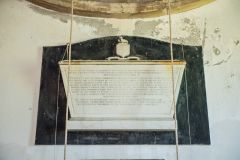 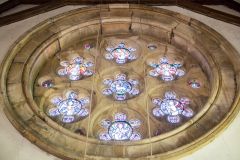