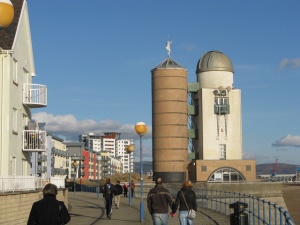 Swansea is the second-largest city in Wales, after Cardiff, and lies on the northern edge of the Bristol Channel on the estuary of the River Tawe. The location gives the city its Welsh name, Abertawe, meaning 'mouth of the Tawe'. The city's English name comes from the Viking Svensi, or Svenshi.

The area of present-day Swansea was settled at least as early as the Bronze age, and we know that there was a Roman villa nearby. Most settlement took place on the Gower peninsula, to the south and west. The Vikings arrived in the 9th century, but by the 10th century Swansea was part of the Welsh kingdom of Deheubarth.

After the Norman invasion of south Wales in the 12th century the Gower region became a marcher lordship. The lordship included Swansea and the Gower. Swansea was named the regional capital and the Normans encouraged immigrants from England to settle here. 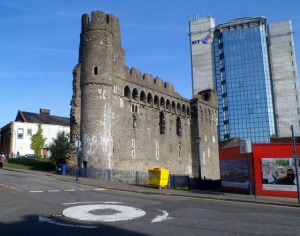 To control their new territory the Normans needed a stronghold. In 1106 Henry de Beaumont erected a motte and bailey castle, defended by a timber palisade. Within a decade Swansea Castle was attacked by the Welsh, and attackers returned several times over the following century.

The castle defences were rebuilt in stone to defend against the repeated Welsh attacks. The worst of these attacks came in 1192 when Rhys ap Gruffydd, Prince of Deheubarth, besieged the castle for 10 weeks but could not force the starving garrison to surrender.

The powerful De Braose family held the lordship of Gower throughout the 13th century, but their family seat was at Oystermouth Castle. The castle had already begun to lose its strategic importance by the 14th century. The castle was used as a 17th-century bottle factory and later housed Swansea's town hall.

In the Georgian period the castle served as a workhouse and later as a military drill hall. All that remains of the medieval castle today is a section of the outer bailey, incorporating a garderobe tower.

In the medieval period, Swansea's main industries were wool, leather, and shipbuilding. Its coastal location made Swansea a natural trading centre, and there was a weekly market and two annual fairs.

The port of Swansea grew busier in the 17th century as coal mining and iron smelting made Glamorgan a hive of industry. so busy, in fact, that a third fair was added.

During the Victorian period Swansea became a centre of the metalworking trade. The port's prosperity exploded when the Swansea Canal was built, bringing industrial traffic to the growing port. Three docks were built in the 19th century, making Swansea one of the busiest shipping centres in Britain.

Two more docks were added in the early 20th century, but when the metalworking and coal mining industries collapsed Swansea suffered. In recent years one of the docks was converted into a marina.

Today, Swansea is a popular base for exploring the picturesque Gower peninsula with its medieval castles and beautiful, sandy beaches. 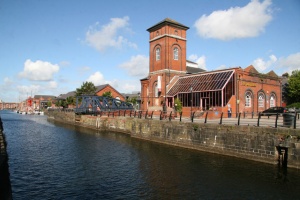 You can explore the history of Swansea and Gower in the Swansea Museum on Victoria Road. This is the oldest museum in Wales and houses a huge collection of historical artefacts. Explore the hardships faced by Swansea residents during WWII, and a large collection of maritime objects. There are archaeological finds from across south Wales and an extremely good display of items from Ancient Egypt.

The museum has a large number of historical boats, including two that are maintained as floating exhibits at Swansea Marina; the 1954 tugboat 'Canning', and Lightship 91 (aka 'Helwick', used to warn ships about the Helwick Sandbank.

This beautiful museum explores the maritime and industrial history of Wales from the Victorian period to the present day. Learn about the inventions that transformed the world, including Richard Trevithick's steam engine, and the days when Wales supplied most of the world's coal and steel.

The poet Dylan Thomas was born in Swansea and spent his childhood here. The Dylan Thomas Centre looks at one of the most influential figures in Wales' cultural history. The centre also organises walks taking in locations linked to Thomas and his life.

The city's premier art gallery is the Glynn Vivian Art Gallery, established in 1911 as a gift to Swansea by Richard Glynn Vivian.

This historic 50-acre public garden is based on the landscape gardens surrounding Clyne Castle. In 1921 Algernon 'The Admiral' Vivian inherited the estate. Vivian was an avid plant-hunter and sent several seed-gathering expeditions abroad. He planted his gardens with a collection of 2000 different species of rare and unusual plants, including over 800 rhododendrons. Admiral Vivian built a gazebo beside the castle so that he could watch ships entering Swansea Bay. Among the garden highlights is the tallest Magnolia in Britain.

A few miles away is Oystermouth Castle, the former stronghold of the Braose family. The castle dates to the 12th century and stands on a hilltop overlooking the coastal village of Mumbles. Oystermouth Castle was the seat of the powerful Marcher Lords of Gower throughout the Middle Ages.

Self Catering near Swansea