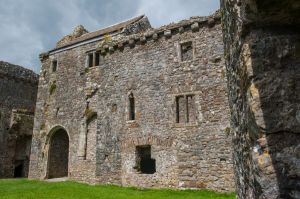 Although the towers of Weobley Castle satisfy every requirement of a romantic medieval castle, it is more accurate to describe it as a fortified manor house, with few of the serious defensive features one would expect in a purely military building. Weobley was erected by the powerful de la Bere family in the early 14th century.

Weobley Castle was expanded in the 15th century and provided with a tall, arched entry. The oldest surviving part of the castle is the 13th-century south-west tower. The east block was rebuilt in the 15th century with more creature comforts than the previous medieval building. Just outside this block are the ruins of a limekiln.

The earliest evidence we have at Weobley points to a date of 1304 for construction. The first building to be built was the hall block (reinforcing the point that Weobley was primarily intended as a home, rather than a fortress). Two south towers and a section of curtain wall date to the same time. The open site was enclosed during a second phase of building with the addition of a solar, chapel, curtain wall, and west gateway.

Most of this work was probably initiated by David de la Bere, Lord of Gower, between 1304-1327. The castle was badly damaged in the Owain Glyndwr rebellion of the early 15th century. The next really major construction at Weobley did not take place until the late 15th century under Sir Rhys ap Thomas, who added a porch block to provide a more imposing entrance. 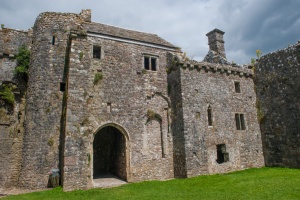 Sir Rhys gained possession of Weobley in return for his support of Henry VII at the Battle of Bosworth in 1485. Just as at Carew Castle in Pembrokeshire, Sir Rhys spent lavishly to create a luxurious residence that reflected his social status.

In the 16th century the castle passed to the Herbert family, Lords of Gower, and from them to the Somersets, eventually to become Dukes of Beaufort. Weobley was too remote for these grand families, and fell into decay; the gatehouse was eventually used as a farmhouse. It is now cared for by Cadw, Welsh Heritage.

The castle is very well signed from all approaches around Llanrhidian village. There is a small parking area and footpaths leading out onto the marshes if you fancy exploring the area. The farmhouse - formerly the castle gatehouse - offers tea and farm produce, and this is where you stop first to purchase entrance tickets.

The castle truly is not large, again emphasizing that despite the name it is really a fortified residence rather than a military fortress. There is an interesting display area inside the gatehouse tower, with information on Weobley and other castles around the Gower peninsula. The location is utterly wonderful, with very scenic views out across the marshes to the River Loughor.

If a single word can describe a castle, Weobley's word is "organic". As you see it over the curve of the hill, nested on the clifftop, you will notice its solidity. It looks as if it has grown from the earth, and has deep stone taproots. As I found out, wandering around the edge, its foundations are, in part, simply the living stone of the bluff it sits upon. More obviously, the stonework is the same as the local rock, right down to the lichen covering it. The builders may as well have deconstructed a natural monolith and rearranged it into a castle.

Weobley spent a short time in the 13th Century as a defensible castle. Since then it has been made more comfortable, more of a fortified manor than a fortress. Windows, in all shapes and sizes, have been added. Some appear to be from cottages, some from churches, and others from 'The Lord of the Rings'.

They frame stunning views of the salt flats, and, eventually, the beach, which lies about a mile from this "seaside" castle. I'm writing from a window seat, within the roofed exhibition room. It's a stark sort of luxury. It's the sort of place that would always feel slightly cold because of the view, no matter how warm and cheerful the inside was. Yet it might be this week's "castle the author would most like to call home".

The view is amazing, the castle is picturesque, and, though small, there is plenty to find. It has cellars, and dead-end corridors, and an old ruined kiln around the back. Somehow it seems to fit its surroundings perfectly, like a hand in what would be a rough, woolly, and salt-stained glove. 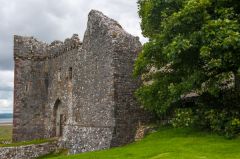 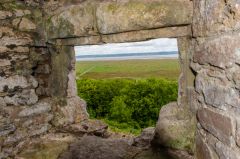 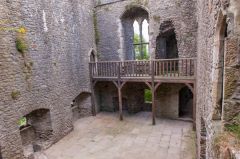 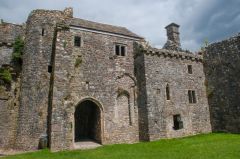 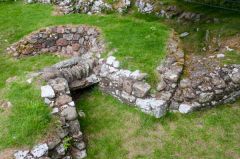 More self catering near Weobley Castle >> 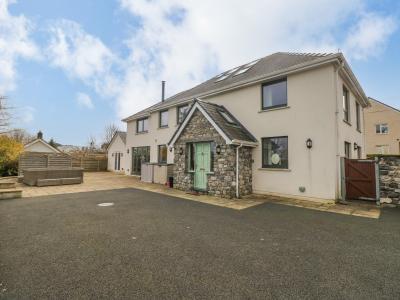