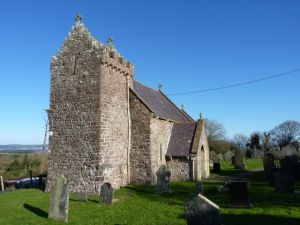 Llanmadoc, St Madoc Church
St Madoc's church is not just dedicated to St Madoc, it was founded by him in the 6th century. The church was rebuilt in the 13th century, and then restored in the 1800's.
Historic highlights at Llanmadoc include a 6th century stone, 7th century boundary marker, and a Norman font. Medieval wall paintings were revealed during restoration in the mid-19th century, but unfortunately most of these paintings were destroyed.

History
While the origins of Madoc's original church here are lost in the mists of time, we do know that around 1156 Margaret, Countess of Warwick, granted the parish to the Knights Templar. After the Templars were suppressed in the early 14th century the church passed to the Knights Hospitallers (forerunners of the St John Ambulance). The church was restored in 1861 under the direction of Rev. JD Davies, who carved the oak altar frontal himself.

The chancel arch is probably 12th century, while the tower was probably added later in the medieval period. It is oddly low, out of proportion to the body of the church. This has led some historians to suggest that it was originally much higher, but was shortened during restoration. There is a medieval trefoil window set in the south wall of the chancel.

One historian has suggested that St Madoc's, along with other Gower churches, was fortified against attack by the Welsh. This seems a bit unlikely, though it is possible the churches were strengthened against possible pirate raids from the sea.

Highlights
In 1861 an ancient stone carved with an inscription was found embedded in the wall of the old parsonage at Llanmadoc. The stone dates to the 6th century and commemorates 'Advenctus son of Guanus'. It is intriguing to think that the stone was carved at roughly the same time that Madoc set up his church here. The stone is now set in a windowsill inside the church.

Set in the west wall is a pillar cross, near a boundary marker. These are loosely dated to the 7th-9th century. All these carved stones were found locally and brought inside the church; they were not originally found here, so there direct connection to St Madoc's is tenuous. By comparison, the simple stone font is a newcomer, installed in the Norman period.

The church is open most days throughout the year.