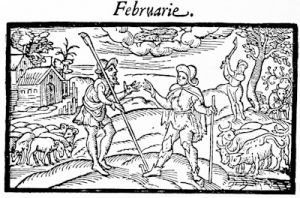 A cut from the rare first edition of Spenser's 'Shepherd's Calendar'

Until the age of Chaucer, at the close of the fourteenth century, England had produced nothing which could enable her to rank among the literary peoples. Before the accession of Henry VII Wiclif's Bible, Langland's Piers Plowman, the works of Chaucer himself, and the Morte d'Arthur of Mallory, were the only works in the English tongue which could in any sense be held to rank as classics. In the reigns of Edward IV and of Henry VII the intellectual movement was at last beginning to take hold of the English.

Utopia
Education and liberal studies received a strong stimulus, but still an English literature was unborn. Sir Thomas More's native humour combined with his Platonism to produce the Utopia before Martin Luther had flung down his challenge to the papacy; but the Utopia was written in Latin, not in English. Literary energy was almost entirely absorbed in pamphleteering and theological controversy, and of poetry there was none in England until the latter years of Henry VIII; unless we dignify by the name of poetry the satires of John Skelton, whose doggerel rhymes have at least immortalised his name.

Scotland, on the other hand, produced William Dunbar, who may in some sort be regarded as the remote progenitor of Robert Burns; and in Bishop Gavin Douglas and Sir David Lindsay, the northern poets maintained their claim to have carried on the Chaucerian tradition much more successfully than their southern neighbours.

The capacities of English prose found their best expression in the great translations of the Bible by William Tyndale and others, of which our own "authorised version" is a modification, in the music of the new English Church Services, and in the racy rhetoric of Hugh Latimer's Sermons. Still, before Henry VIII. was dead, Surrey and Wyatt, harbingers of the coming dawn, were weaving dainty fancies into dainty verse, learnt mainly from Italian models, piping a delicate prelude to the glorious outburst of Elizabethan song.

Foxe's Book of Martyrs
Yet fully, twenty years of Elizabeth's own reign were past before any sign appeared that the poets were to share with the sailors the glories of her reign. Only in translation had it been shown that English prose could be made an instrument of artistic expression, though Foxe in the work commonly called the Book of Martyrs, and John Knox in his History of the Reformation in Scotland, had proved its capacity for vigorous narrative. The year which signalises the birth of a new era is 1379, the year in which appeared the Shepherd's Calendar of Edmund Spenser, and that very amazing work the Euphues of John Lyly.

The one great original work of the early Tudor period was Moore's Utopia. Himself no mean scholar, and the intimate friend of all the best scholars of his time, the son of a judge, and bred up in part in the household of Cardinal Morton, More as a young man was strongly drawn towards entering the religious life. But something withheld him. He became an active man of affairs, and a somewhat unwilling favourite of Henry VIII. He was Speaker in the House of Commons which declined to be brow-beaten by Cardinal Wolsey, whom he succeeded as Chancellor.

He resigned the Chancellorship on a point of conscience, be­cause he would not admit that a secular authority could be supreme in matters spiritual; and he cheerfully chose to be beheaded as a traitor when he was offered his choice between acknowledging the royal supremacy over the Church and losing his head.

Such was the man who, in his imaginary Commonwealth, depicted by contrast the social and political conditions of his time as he saw them, with a satire none the less penetrating for its kindliness. His ideal Commonwealth is an anticipation of modern socialistic dreams; dreams, that is, of a Christian socialism, resting hot upon economic but upon moral foundations, and reaching back to the communistic doctrines of Plato's Republic.

Euphuism has been held up to our ridicule, but Euphues is very far from being altogether ridiculous. It is full of an extravagant pedantry, an exaggerated foppery of phraseology, a fantastic playing upon words, which at first invite burlesque emulation but very soon become inexpressibly tedious. But Euphues meant something serious. Admirable moral aims, indeed, are not a passport to Heaven; the significance of the work lies in the fact that it was a deliberate attempt to create a style, a conscious effort to give prose composition a decorative value, to apply to prose the idea of artistic selection in the use of words.

The actual result was fantastic enough, and fantastical conversation modelled upon it became the fashion in polite society; the wits played with Euphuism, and if Shakespeare burlesqued it, its influence is also nevertheless apparent in many passages which have no savour of parody. English style we may say for the first time became self-conscious in John Lyly's work, which is thereby rendered significant; it became absurd chiefly because it had not learnt to conceal its self-consciousness and to produce the impression of spontaneity.

The Shepherd's Calendar and Faerie Queen
At the same time Spenser, in the Shepherd's Calendar, achieved, in what we call minor poetry, a standard which decisively proved the effectiveness of the English tongue in that field. It was not till ten years later, when the Armada had come and gone, that the first book of the Faerie Queen definitely enriched the literature of the world. Had the age of Elizabeth produced no other poet than Spenser it would still have been glorious in the annals of poetry.