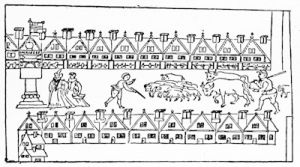 Eastcheap market about 1598, from a drawing in the British Museum

We have already described the depression of the rural population, which reached its climax in the middle years of the century. The process of enclosure appears to have come to an end quite early in Elizabeth's reign with the disappearance of the immense disparity between the profits of wool-growing and of tillage.

The constant displacement of labour ceased, and the problem was reduced to that of finding employment for those already displaced, of whom a large proportion were willing enough to work, if they, could get work to do upon reasonable terms. The system of apprenticeship controlled by the gilds had in the past shut this displaced labour out of employment in the trading and manufacturing industries; but the expansion of trade, and the multiplication of minor industries which were not subject to gild regulations, now began to provide employment for this surplus working population.

The Statute of Apprentices
The Statute of Apprentices, an Act passed quite early in the reign of Elizabeth, did much towards the settling of industrial conditions. In spite of the fact that there was manifestly a good deal of wealth in the country though Henry VIII's depredations and the financial chaos of the two next reigns were extremely unsettling, the chartered towns throughout the Tudor period, until the accession of Elizabeth, were losing their old prosperity, which was already to some extent falling off in the fifteenth century.

They were responsible for their own misfortunes, which were largely the outcome of the self-protective policy of the gilds, which tried to make a close preserve of their trades. They forbade the practice of a trade by any one who had not qualified by a stated term of apprenticeship, the numbers of apprentices were limited, and apprenticeship itself was open only to the children of Hie comparatively prosperous.

Theoretically, these rules were enforced in order to maintain a high standard of efficiency, though it is safe to suppose that the desire to restrict competition was really a more active motive with the gild councils. But the actual effect was to drive would-be competitors out of the chartered towns into the unchartered market-towns, where there was no authority to enforce gild regulations. The high standards were, perhaps, not maintained, but production was cheaper, and the market towns attracted the custom which before had been concentrated in the chartered towns.

By the Statute of Apprentices uniformity was introduced. It ceased to be the business of the local authority to make the regulations, which were laid down by law; the local authority becoming the machinery through which the law was enforced. Seven years' apprenticeship was required before any one could set up in trade on his own account in the then recognised trades, and the whole country was covered by the regulations, instead of only the chartered towns, while the conditions of admission to apprenticeship were made less rigorous in the latter.

Moreover, the statute only applied to the Existing trades which were scheduled in the Act, so that the new trades which sprang up during the reign were outside its operation. From this period dates the development of spinning and weaving in particular, as occupations engaging the rural population, in addition to agricultural labour. No apprenticeship was required, and the industry could be made supplementary to field work, besides giving employment to women and children. The enclosures had been responsible for bringing into prominence problem which had not been aggressively noticeable in the Middle Ages; the double problem, it may be called, of helpless poverty and wilful vagrancy.

Caring for the indigent
Both were further intensified by the dissolution of the monasteries, which, on the one hand, was followed by an increase of enclosure, while, on the other hand, it abolished the one institution which admitted a sort of professional responsibility for the care of the indigent. Whatever the sins of the monks may have been, the monasteries, in fact, did a good deal towards clothing the naked and feeding the hungry, though their methods probably encouraged those who preferred idle beggary to laborious poverty. But when the monasteries were dissolved, no one admitted responsibility for maintaining the indigent, and the number of sturdy vagabonds was multiplied.

Elizabethan Poor Law
Then some town corporations experimented on their own account, and Elizabeth's exceedingly practical ministers extended the experiments. The object was to differentiate between the wilfully idle and the poor who were either incapable of work or were idle only because they could find no work to do. The failure of appeals for voluntary contributions led to the levying of compulsory contributions for the maintenance of the impotent - poor, and the results of forty years of experimentation were formulated in the Elizabethan Poor Law of 1601, which continued in force with little modification for nearly two centuries.