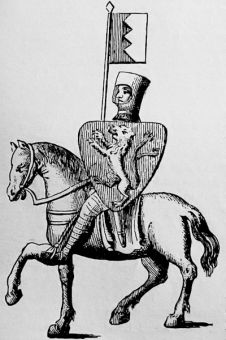 Simon de Montfort the elder, from a window in Chartres Cathedral, about 1230

Montfort repudiated the award [Mise of Amiens] as the other side would undoubtedly have done had it gone against them. Both sides appealed to arms. Montfort had emphatically championed popular rights and popular liberties, as his opponents had championed baronial privileges.

The contest now was not one between the Crown and the barons, but between a popular party headed by Montfort and supported by the towns and Commons generally, and a feudal party which had joined hands with the supporters of the Crown.

But Montfort was far superior to his adversaries in military skill; and although the odds at first had seemed against him, when the opposing forces met in a pitched battle at Lewes he was completely victorious; Henry himself and his eldest son, who afterwards became Edward I, were obliged to surrender to him. Thus Earl Simon was able practically to dictate to the king a new arrangement known as the Mise of Lewes.

Terms of the Mise of Lewes
The government was to be in the hands of a council, and the council was to be appointed by a committee of arbitrators from which all aliens were to be excluded. The arrangement collapsed at once, because no tolerably impartial committee could be brought together. But immediately afterward the Great Council was again assembled, at which there was again present that fleeting element, the representative knights of the shire.

Dictatorship
To this Council or Parliament. Earl Simon presented a new scheme. The Council was itself to appoint three electors, none of whom were to be aliens. The three electors were to nominate a council of nine. The nine were to appoint all officers of state and were in fact to control the government. The parliament chose as electors Montfort himself with the young Earl Gilbert of Gloucester and the Bishop of Chichester, two of his strongest supporters. The arrange­ment meant the dictatorship of Simon de Montfort.

Simon de Montfort's Parliament
At the end of the year the dictator summoned the famous parliament which met at the beginning of 1265, Hitherto the Great Council had con­sisted of the greater, barons and higher clergy, summoned personally by the king, occasionally but irregularly sup­plemented by elected knights of the shire.

The Burgess innovation
Not all of the greater barons were summoned to Montfort's parliament, which, was in fact a packed assembly, but the Earl introduced an important innovation. Besides the elected knights of the shire he selected a number of boroughs, which were in general favourable to him, and summoned two elected burgesses from each of them.

The parliament is famous, not because of what it accomplished, but because it was the first in which the burgess element was represented. There had been previous occasions when burgesses had been summoned for consultation and to give information, but they had not been allowed any voice in the actual delibera­tions of the Council.

Consequences of the Parliament
Montfort set a precedent which was not to be perma­nently adopted till thirty years afterwards, but its importance is not therefore to be underrated. Montfort professedly intended the method of government instituted after the Mise of Lewes to serve merely as a modus vivendi until a permanent system could be agreed upon.

But in the meanwhile the other side was mustering troops in France for a renewal of the war, and the provisional government was constantly threatened from the side of the Welsh marches, where Mortimer stood for the king's party. Earl Simon's popularity was derived from those qualities in his character which had won for him the name of Earl Simon the Righteous, and heroes of the Puritan type are generally prone to make enemies.

His sons lacked their father's idealism and alienated many who would willingly have supported the Earl himself. They quarrelled with the Earl of Gloucester, who opened negotiations with Mortimer. Prince Edward escaped from his custody and joined the Marcher earls who rose in arms.

The insurgents were in overwhelming force from north to south of the Welsh marches. Montfort had at last met his match. A year before he had out-generalled the Royalists, and at the battle of Lewes, Prince Edward had played the part of Prince Rupert in the great Rebellion four hundred years afterwards. His cavalry charge had swept away the wing of Simon's army opposed to him, but he had rushed on in a prolonged pursuit and returned to the field only to find the battle lost. It was the blunder of inexperience.

The Battle of Evesham
Edward had learnt his lesson and realised the importance of scientific strategy and scientific tactics in war. Montfort's son- was at Kenilworth in Warwickshire, and with him the Earl intended to form a junction and then crush the Prince. But Edward struck at the younger Montfort before the elder arrived. When the Earl reached Evesham, instead of being joined by his son, he was met by the Prince in superior force. With anything like equal capacity in the leaders the result of the battle was a foregone conclusion. Montfort's army was annihilated and he himself was slain.

Nearly two years elapsed before pacification was completed. Gloucester had turned against Montfort on personal grounds, but his aims had always been nearly akin to those of Montfort himself; and when the Royalists seemed to him to be using their victory unjustly, he threatened to raise revolt again. But, in fact though not in name, Edward had already taken his father's place.

The great Earl was dead, but essentially his cause was victorious. Edward was Montfort's disciple in statesmanship as well as in war; and the Crown itself took up the task of establishing a government which should be at once just, strong, and patriotic.

Five years after Evesham order had been so completely restored, and the existence of a new and firm regime so thoroughly recognised, that Edward himself was able to leave the country on the last crusade in which an English Prince took part, and to remain absent for four years, although his father died during the interval.

Simon de Montfort's Legacy
Earl Simon's career is unique in English history. Born and bred a foreigner, a younger son of that Simon de Montfort of European fame who led the crusade against the Albigenses and acquired the county of Toulouse he came to England merely to make good a claim to the earldom of Leicester which had descended to his father.

At the outset he was in the eyes of Englishmen a typical alien, to be classed with the Poitevins and Savoyards; especially when he obtained the royal assent to his marriage with one of the king's sisters, a marriage which greatly disgusted the king's brother, Richard of Cornwall. Yet we find him associated with Richard as most prominent among the barons in calling for a revision of the whole system of government after Henry's expedition to Poitou.

He won himself a foremost place by his high abilities as a soldier and as an administrator, which were put to the proof when he was sent abroad to govern Gascony in the king's name. But his high moral character with its Puritan quality, his idealism, his devotion to a cause which appealed not at all to other men of his own class, singled him out even more than his abilities from the rest of the English magnates and made him inevitably the leader.

There is little enough sign in him of constructive statesmanship; he was one of those men who with power in his own hands would have ruled autocratically, with even-handed justice according to his lights and with a single eye to the welfare not of himself, not of a class, but of the community at large.

But the one innovation introduced by him which was, in the long run to be permanently established, the representation of the towns in the National Council, was merely an accident, the outcome of the fact that he was himself assured of the support of that new element. None of the machinery which he devised for controlling the power of the Crown could conceivably have been made permanent with beneficial results, though it must also be remarked that he himself never intended it to be permanent.

His greatness lies in his insistence on the principle that the aim of the government; must be the prosperity of the whole state, and his manifest desire to make the government a government by national consent.