Why the Tourist Crossed the Road

Nestled in the St. John's Wood section of Northwest London one finds a stately 19th-century building and a famous pedestrian crosswalk that music fans from around the globe make a stop at on their pilgrimages to see places related to the Beatles.

Abbey Road Studios, at 3 Abbey Road, London NW8, is where most of the Beatles' recordings took place between 1962 and 1969. This noble old building takes on nearly as great a stature as do England's ancient monuments. In fact, in the life of rock and roll, Abbey Road Studios might be considered an ancient (although fully functional) monument.

History
Built in 1830 as a private home, The Gramophone Company Ltd. (now known as EMI) began its studio operation at the site in 1931, recording the top orchestras of the day. The Beatles' history at the studios began 6 June 1962; they arrived at Abbey Road in an old white van, wearing black leather jackets and unloaded their battered equipment, including unpainted wooden amplifiers, which left much to be desired in the eyes and ears of the recording technicians. A four-song demo session ensued.

At the session, the band's producer, George Martin, gave the Beatles a lecture about the importance of using better quality amplifiers, ending his diatribe with the query, "Look, I've laid into you for quite a time, and you haven't responded. Is there anything you don't like?" A long pause followed, with shuffling of the Beatles' feet. George Harrison stared at the producer and said, "Yeah, I don't like your tie!" And so began the placement of Abbey Road Studios as a shrine in the eyes of Beatle fans. 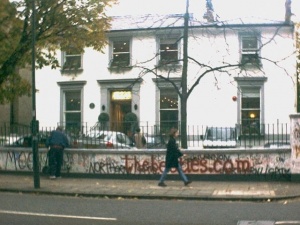 Throughout the Beatle years, hit songs such as "She Loves You," "I Want to Hold Your Hand," and "Help!" were recorded here, as were the masterpiece albums Sergeant Pepper's Lonely Hearts Club Band and, of course, Abbey Road.

Paul McCartney lived around the corner from the studios during the 1960s, and his house became a base for the Beatles to meet at before recording sessions. In the 1960s the studio was considered state of the art, and it has held up that reputation today, with scores for the movies Raiders Of The Lost Ark, Braveheart, and Star Wars - The Phantom Menace being among those recorded at Abbey Road.

The building houses four studios. Studio One is roughly 92 feet by 52 feet, and has 4,876 square feet of floor space with a ceiling nearly forty feet high. It is large enough to record a 100-piece orchestra and a 120 piece vocal choir (what would happen if they tried to cram an additional piccolo player or one extra soprano in there is left only to one's imagination).

Studio Two is about half the size of Studio One, and can accommodate 55 musicians. Studio Three is of a more moderate size (about the same amount of floor space as a modest house) and features a mirrored isolation room where unique acoustics take place due to the room's lack of parallel surfaces. The Penthouse Studio graces the top floor, with views looking down to the Abbey Road Studios' garden. Also on the premises are a fully licensed restaurant and bar, as well as two luxury apartments.

As Abbey Road Studios is a working business, public tours are not available. However, for a short two-month period in the summer of 1983 the doors were opened to interested parties for guided visits and a ninety-minute video presentation in Studio Two. Since that time, the doors remain locked to the public and there are no future plans for tours.

To get to Abbey Road, depart the Underground at St. John's Wood Station; look to the southwest for Grove End Road, and follow Grove End Road for a few blocks, about ï¿½ mile. You'll come to a monument on a pedestal, and the famous Abbey Road album cover crosswalk (the markings on the asphalt have changed somewhat since 1969). Belisha beacons (lighted globes on posts) at the zebra crossing are there to warn drivers that this is a popular spot for pedestrians to cross the street. 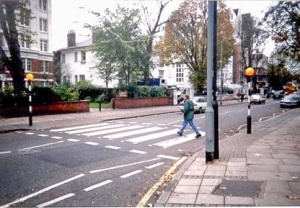 THE Crosswalk
photo by Bill Wisti

Some tourists might dare to have their picture taken in the middle of the crossing - I know I felt it obligatory to do just that on a visit to London. I did feel just a little on the silly side when posing, but I figured that it was likely that my embarrassment would fade by the time I left the neighbourhood.

Be on the lookout for vehicles if you decide to have your picture taken in the crosswalk. It's a busy intersection and not every driver is willing to stop for a tourist who wants to have his or her picture snapped where the Beatles' picture was taken for the Abbey Road album cover.

A minute's walk from the crossing is a nondescript white building with grey trim and a low, gated wall filled with graffiti written by tourists from around the world. A small, unassuming sign above the building's front door reads "Abbey Road Studios."

Getting There
St. John's Wood tube