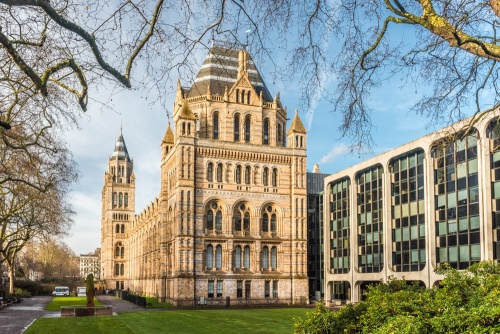 The Natural History Museum was originally part of the British Museum, but the collection became so large that the curators realised that they needed to create an entirely separate museum. The NHM covers all forms of natural history, from dinosaurs to human biology, volcanos to ecology, and fossils to geology.

To understand the foundation of the Natural History Museum we must go back to the early years of the 18th century. A prominent London physician named Sir Hans Sloane (1660-1753) made it his life's work to collect natural curiosities from across the world.

Sloane's eccentric collection of oddments ran the gamut from plant and animal remains to archaeological artefacts and human skeletons. Sloane desired that his collection remain together at his death, and created a Board of Trustees to oversee its sale to the government for the bargain price of £20,000. 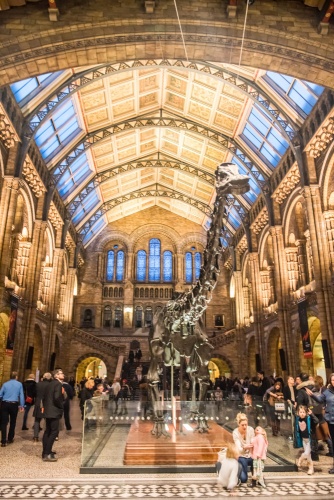 In 1756 Sloane's collection was housed in Montagu House, the first home of what was to become the British Museum. Over the next century, the collection was expanded and added to by further bequests, most notably that of Sir Joseph Banks (see Kew Gardens).

In 1856 the natural history department of the British Museum gained its first overseer, palaeontologist Richard Owen. With the help of Prime Minister William Gladstone, Owen convinced the government that more space was essential to the functioning of the collection.

Land was purchased in South Kensington, and a design competition was held for the new museum buildings. A design by Captain Robert Fowke was selected as the winning entry, though Fowke died in 1867 and the actual building was carried out by architect Alfred Waterhouse.

After a great deal of squabbling between curators of the various collections within the new museum, the building in South Kensington finally opened to the public in 1881. Though it was separate in fact, it was not until 1963 that the Natural History Museum was established as a body independent of the British Museum. In 1986 the Geological Museum was merged with the NHM.

The museum building is as striking as the exhibits it contains. Designed by Fowke as a cathedral of science, the museum is entered through a set of doors flanked by columns modelled on those at Fingle's Cave in Scotland.

The Romanesque style interior is supported on intricately carved and decorated columns. Terra-cotta has been used as a unifying decorative material, and everywhere there are carvings of beats and plants, both imaginary and real. 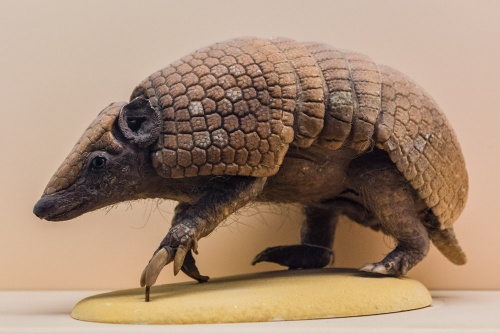 A three-banded armadillo in the Mammals gallery

The museum can be divided into several distinct areas; the Life Galleries, Earth Galleries, Wildlife Garden, and Temporary Exhibitions. Within the Life Galleries are displays dedicated to Dinosaurs, Ecology, Human Biology, Mammals, Primates, the Origin of Species, and Minerals.

The Earth Galleries focus on the geological history of the earth and the solar system. Within this gallery are fascinating simulators enabling visitors to experience for themselves what it feels like to live through an earthquake or a volcanic eruption. Learn about plate tectonics and what influences climate.

The Wildlife Gallery is a one-acre garden space on the west lawn of the museum, where different British habitats are recreated, including marsh, ponds, oak and bluebell woods, hedgerows and grass meadows.

The museum also presents an ongoing program of Temporary Exhibits with themes ranging from artwork depicting animals to Myths and Monsters, Predators, photographic competitions, and more. 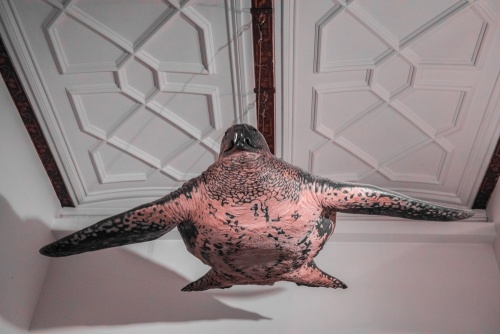 The Natural History Museum is one of the world's finest museums in any discipline and is well-deserving of a visit. The museum web site is a highly recommended resource for learning more about the museum exhibits, history, and visiting details.

Getting there is easy; the museum, along with the neighbouring Science Museum and the Victoria and Albert Museum, are accessible directly from the South Kensington tube station. Just follow the signposted route through underground pedestrian tunnels from the station.

One word of warning; the museum is extremely popular and can be exceptionally crowded at times, especially during the annual Wildlife Photographer of the Year exhibition. You may find yourself in a long security queue waiting to get in. 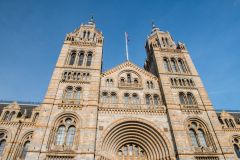 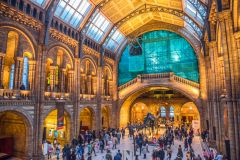 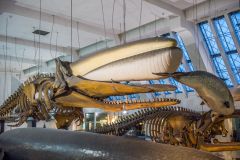 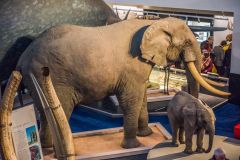 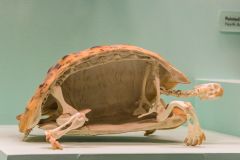