HERITAGE HIGHLIGHTS:   The hour bell of the Clock Tower of the Houses of Parliament is a true British icon. 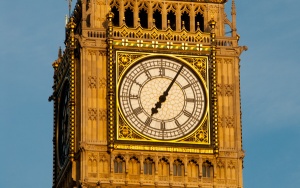 The Clock Tower
(but not actually 'Big Ben'!)

When most people hear the words "Big Ben" they immediately conjure up an image of the striking Victorian Gothic structure of the clock tower of the Palace of Westminster (the Houses of Parliament).

Let's clear up a common misconception first; technically speaking, the name "Big Ben" does not refer to the famous tower, nor to the four huge clock faces of this London landmark; instead, it refers to the largest of the five bells inside the clock tower, whose chimes are such a familiar sound to listeners to BBC radio over the years.

The tower was begun following the disastrous fire which destroyed the old Palace of Westminster in 1834. Charles Barry was given the contract to rebuild the Palace, and his designs included a clock tower.

The clock tower of the Palace of Westminster took 13 years to build and was completed in 1856. The tower is 316 feet high. The spire that rises above the belfry is built with an iron frame, and it is this frame which supports the weight of the bells. A staircase rises up inside the tower, and a climb is rewarded by excellent views from the belfry level. Several small rooms are built into the lower part of the tower, including a small prison cell.

The cast-iron frame of the clock face was designed by AW Pugin, who was responsible for much of the Gothic decorative elements of the Palace of Westminster. The dials are 23 feet in diameter and the faces themselves are not solid, but is composed of many small pieces of opal glass, assembled like a stained glass window.

Several of the central pieces of glass can be removed to allow inspection of the hands from inside the clock tower. The numbers on the clock faces are each two feet high. An inscription in Latin below each clock face translates as "God save our Queen Victoria I".

At the time of its construction, the clock mechanism was easily the largest in the world, and it is still among the largest today. The clock mechanism, designed by Edmund Beckett Denison, has proven to be remarkably accurate over the years, allowing small adjustments to the clock's rate to be made by placing pennies on a small shoulder of the clock's pendulum!

Big Ben - the hour bell - is said to have been named after Sir Benjamin Hall, Commissioner of Works, who was known for his bulk, as is the bell! The first Big Ben hour bell was complete before the tower, so the bell was hung in New Palace Yard. After repeated public ringing the bell cracked and had to be replaced by the current bell.

The hour bell of Big Ben is 8 feet in diameter, weighs 13.5 tons, and was cast in 1858 by George Mears of the Whitechapel Bell foundry.

The bell had to be placed in a special wooden frame, turned on its side, and hoisted up the centre of the tower to the belfry. So heavy was Big Ben that the process took over 36 hours to complete. The bell began ringing the hours in July of 1859, but it cracked after only two months of use. Instead of recasting the bell, it was simply given a quarter turn, and a lighter hammer was used to strike the hours.

The first BBC radio broadcast of the Big Ben chimes was on New Year's Eve, 1923. Later, permanent microphones were placed in the tower, and the sound of Big Ben became a familiar one to listeners, assuming great significance during WWII when the chimes became a symbol of hope and home to BBC World Service listeners around the world.

The best time to see Big Ben may be at night when the clock faces are illuminated, as is the facade of the Palace of Westminster facing the Thames. The effect from Westminster Bridge or the far bank of the Thames can be breathtaking.

For information on the availability of tours of the Clock Tower and of Parliament, see the official Parliament UK website. 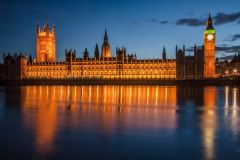 More self catering near Big Ben