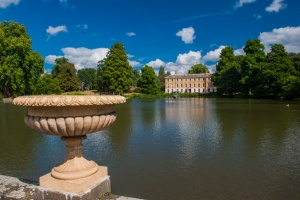 An A-Z of parks and gardens to visit in London

Battersea Park
Albert Bridge Road, London, SW11 4NJ
This 200-acre historic park by the banks of the River Thames boasts the very first sub-tropical garden in England, opened in 1863. There are also wildflower gardens, a deer park, a miniature railway for children, and a small zoo, among other family delights. The first football game played under the rules of the Football Association was played here in 1864.

Chelsea Physic Garden
66 Royal Hospital Road Chelsea SW3 4HS
This botanic garden was founded in 1673 to investigate the medicinal role of plants. It played a major role in the development of the sciences of botany and horticulture. There is a garden shop selling plants.

Green Park
Northern neighbour to Buckingham Palace, Charles II used to stroll here. Indeed, Constitution Hill, on the northern border of the park, commemorates Charles' excursions. The park is better known as the meeting ground for duelists, and many a corpse must have lain on the now peaceful grass.

Hampstead Heath
The largest open space in Greater London, the heath was once home to highwaymen, but now it is a multi-purpose green space with the best panoramic views of the city. Historic Kenwood House is on the northern border of the heath.

Hyde Park
Once a hunting ground for Henry VIII, Hyde Park's character stems from the Serpentine Lake, home to waterfowl and sweating oarsmen. Rotten Row, on the southern boundary of the park, is a famous horse-riding area, and Speaker's Corner, by the Marble Arch entrance, is the place to listen to soap-box orators. on Sunday mornings.

Kensington Gardens
The border between Hyde Park and Kensington Park is vague, but the characters of the parks are quite different. Kensington Gardens was once part of Hyde Park, until William IV enclosed it to become the gardens for Kensington Palace to the west. The Gardens are more orderly and formal than Hyde Park, with a sunken garden and a rectangular pond by the palace. By Long Water is a statue of Peter Pan, whose author, JM Barrie, donated the children's swings nearby.

Regents Park
Once the royal hunting ground of Marylebone Park, Regent's Park was part of a vast redevelopment plan by the Prince Regent, later George IV. The Inner Circle now contains Queen Mary's Garden, fed by the underground Tyburn River. There is space for sailing, tennis, archery, and boating on the Regent's Park Canal.

On the northern edge of Regent's Park stretches Primrose Hill, 62 acres of parkland affording outstanding panoramic views of central London. Primrose Hill was once part of the same royal forest as Regent's Park.

Richmond Park
Holly Lodge, London, TW10 5HS
Richmond Park is London's largest royal park, covering over 2500 acres (roughly 1,000 hectares). It was formed in 1637 when Charles I enclosed the area as a royal hunting preserve. It is home to a large herd of red and fallow deer, which have roamed freely here for almost 400 years. In the centre of the park is Pembroke Lodge, an elegant Georgian mansion.

St James Park
An oasis of calm in the bustle of the West End, St. James Park is bounded by The Mall and Birdcage Walk, while its westernmost end lies practically on the doorstep of Buckingham Palace. The area was a deer park under Henry VIII, a formal garden under Charles II, and was remodelled into its present relaxed air by John Nash in 1827. The central lake is home to large populations of ducks and pelicans.

Victoria Tower Gardens
Set beside the Palace of Westminster is this attractive royal park, created when Joseph Bazalgette built the Embankment in the 1870s. The park features sculptures on the theme of freedom, including Auguste Rodin's famous sculpture of the Burghers of Calais, and a memorial to Emmeline Pankhurst, leader of the suffragette movement.