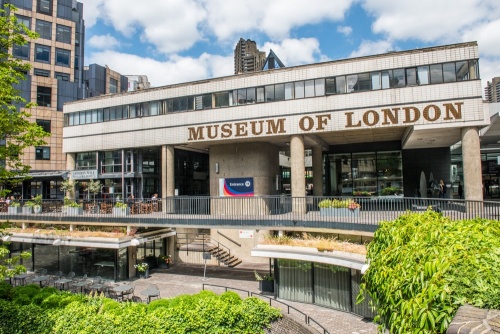 The Museum of London entrance

The Museum of London is one of the world's great museums. It traces the long history of the City of London from prehistoric times to the present day. Whether you are visiting London for the first time or are a Londoner by birth you'll find a wealth of fascinating information to help bring alive the rich heritage of London.

The story of the Museum of London goes back to 1826 when the Guildhall Museum was founded to display finds of Roman mosaic discovered at Tower Street in the City of London. The Museum of London was established in 1912 at Kensington Palace with a much broader focus.

The museum moved two years later to Lancaster House in the West End district. The two museums were merged in 1965 by an Act of Parliament, and the new Museum of London opened at its present site in the Barbican in 1976 (plans are underway for a move to Smithfield in 2021).

The story of London starts long before there was a city! This gallery looks at the Lower Thames Valley from around 450,000 BC to the coming of the Romans. See remains of animals that roamed the area, such as the jaw bone of a woolly mammoth, and prehistoric flint tools and pottery vessels used by the inhabitants of this area.

One intriguing display shows items found in the River Thames. It seems that early inhabitants placed bodies of the dead along with precious objects, into the river. There are also numerous Bronze age weapons and Iron Age artefacts, such as a chariot fitting from 350 BC. One item that caught my eye was a replica of the Battersea Shield (300-100 BC), a metal cover for a wooden shield, made from bronze sheets. 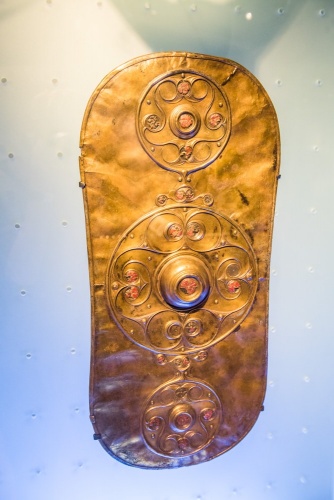 This gallery looks at Londinium, the city established by the Romans around 50 AD at a crossing of the River Thames, until the departure of the Romans from Britain around 410 AD. Learn what life was like for citizens of Londinium, including the skeleton known as 'The Spitalfields Woman'; the earliest known person in Roman Britain to actually come from Rome.

See Roman tombstones including that of Claudia Martina (c. 150-200 AD), wife of a slave working for the civic government. Claudia was aged 19 when she died and is the youngest wife recorded in Roman Britain. See examples of graffiti etched into Roman bricks made locally, and an exceptional 3rd-century intaglio jewel depicting a Roman warship. The jewel was discovered buried in the foreshore of the River Thames.

From the 2nd century is a hoard of Roman gold coins, probably buried to keep them safe from thieves. The owner never returned to recover the 43 coins, and they remained hidden for almost 1900 years until they were discovered in 2000.

Not all the Roman remains are inside the museum itself. A window in the gallery looks out over an intact section of London's city wall, incorporating 2nd-century Roman stonework with later medieval and Victorian restoration. 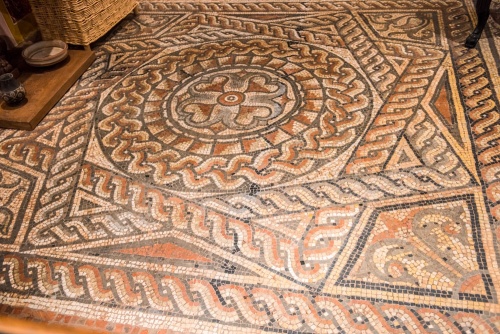 This gallery covers the history of London from the departure of the Romans in the early 5th century to the accession of Elizabeth I to the throne in the middle of the 16th century. Discover the history of the original London Bridge, the devastation of the Black Death, and the story of a city destroyed by invaders and left in a turmoil by religious controversy.

One item that caught my eye was a pair of 12th-century ice skates made from animal bones. Another eye-catcher is a beautifully decorated 7th-century brooch found in the grave of a Saxon woman unearthed at Covent Gardens. There are several early examples of printed books, for example, a copy of The Chronicles of England, printed in 1497 by Wynkyn de Worde. Another prize is a page from the 1476 edition of Chaucer's The Canterbury Tales, detailing part of The Clerk's Tale.

Then there is a pair of medieval spectacles, sadly missing lenses, found in a rubbish dump at Trig Lane. Made around 1435, the spectacles are the earliest and most complete example found in England. 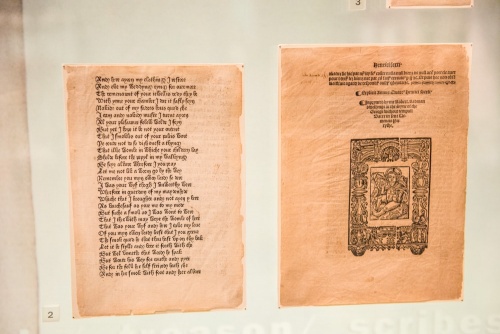 This gallery covers London from the Tudors to the religious and political turmoil of the Civil War, the devastating Plague of 1665 and the Great Fire of 1666. Learn about the new fashion for wearing wigs - and why the Plague put a dent in the wig market (people were wary that wigs might have been made with the hair of dead plague victims).

One of the most interesting objects in this gallery is a copperplate map of London created around 1588. Much more sobering is a mortality broadsheet published in 1665, showing Londoners trying to escape the plague, being treated, and dying.

Probably the most eye-catching item on display, however, is a plaster death mask of Oliver Cromwell, made in 1658. Cromwell, of course, forbade Londoners from enjoying plays, so he would not have enjoyed the scale model of The Rose Playhouse, built in Southwark in 1587.

One touching item is a receipt recording the donation of 53 shillings 9 pence given by the people of Cowfold, Sussex, towards the relief fund established by Charles II to help people made homeless by the Great Fire. Over 16,000 pounds was raised nationwide, the equivalent of over 2.4 million pounds in today's money. 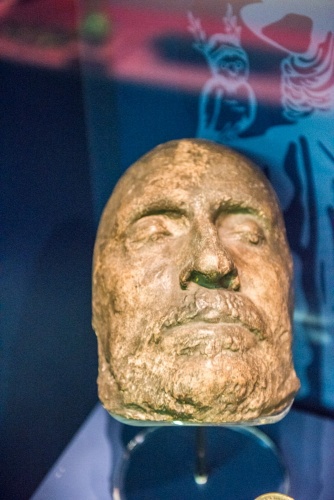 This gallery examines how London rebuilt from the ashes of the Great Fire to become a centre of industry and the world's largest city. That growth came at a cost; poverty was extreme, and child mortality rates meant that 50% of children never reached the age of 10. Some of London's poor ended up in debtors' prison, and the museum displays a 1750 wooden cell from Wellclose Square prison, complete with prisoners' graffiti.

On a happier note, you can see a recreation of Vauxhall Pleasure Gardens, where Londoners went to relax and to be seen by fashionable society. You can also learn about the Thames Tunnel - the first tunnel in the world to go beneath a navigable river - and see an incredibly detailed dollhouse built in 1760 and showing with minute precision the life of a wealthy London family in a typical townhouse.

One of the most interesting exhibits is the jewelled sword of honour given to Admiral Nelson by the Corporation of the City of London in 1800. 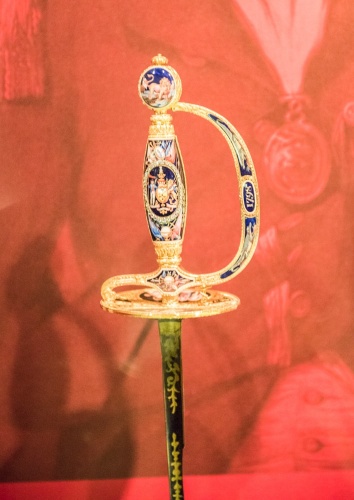 This gallery covers the period between 1850 and World War Two, from the grinding poverty of the Victorian working classes to the destruction of the Blitz. One display looks at crime in Victorian London. Did you know that the newly established Metropolitan Police Force (The Met) had several 'no go' areas, where policemen never went because it was simply too dangerous?

The Victorian Walk is a wonderful series of recreated 19th-century shopfronts, some of which you can walk into, and see how Londoners shopped and the kind of goods they bought. See a traditional tobacconist shop, a toy shop, a tailor, and a pawnbroker. Or you can view a Victorian barber's chair

See how London changed with the advent of the automobile. For example, there is a restored 1908 London taxi on display.

One interesting exhibit looks at hop-picking holidays. In the 1930s many poor Londoners got out of the city on a working holiday to the hop fields of Kent where there was steady - if difficult - work for weeks at a time.

Wealthier Londoners would go shopping at upmarket shops like Selfridges. One display shows an ornately decorated 1928 lift from the Selfridges department store, with carved panels depicting the signs of the Zodiac.

Another exhibit looks at the suffragette movement. Learn about the 1000 women who were imprisoned for the fight to achieve female suffrage. See a hunger strike medal given to suffragette Florence Haig after her release from prison in 1912.

And of course, there is an exhibit covering the dark days of the Blitz. You can step inside an interactive display and experience the sights and sounds of a city at war. 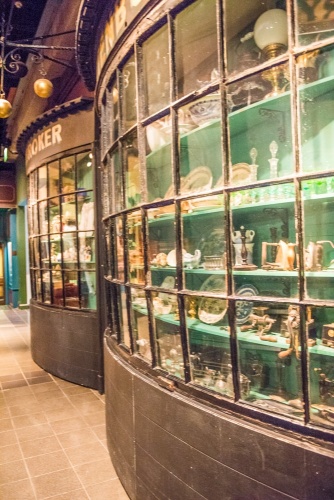 This gallery brings the museum up to the present day, covering the postwar generation and social revolutions of the 1960s and the punk movement. Learn about the 1951 Festival of Britain, the fashion revolution of the 1960s and 70s, and the 2012 London Olympics. The gallery also looks at the serious side of modern London, with exhibits on poverty, racism, and unemployment.

One of the newest museum exhibits is also one of the most popular. See the original London 2012 Cauldron, designed by Thomas Heatherwick and used in the opening and closing ceremonies. See how the Cauldron was designed, how it was secretly tested in the middle of the night, and how it was used during the Olympics. Did you know that the Cauldron had its own code name (Betty) and that it was named after a dog?

Aside from the permanent galleries listed here, the museum also has a regular series of changing exhibits, covering a huge range of topical subjects, as well as public lectures and events. The museum also operates the Museum of London Docklands, covering the history of the Docklands area and London's links to the River Thames in general. 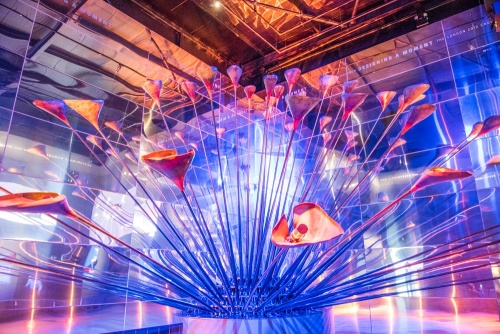 The Museum of London is very easy to reach by public transport. The closest tube station is Barbican. The museum is free to enter and is usually open daily except for Christmas and New Years. 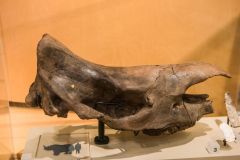 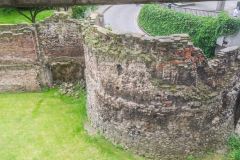 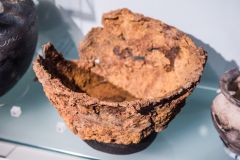 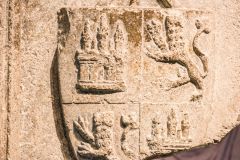 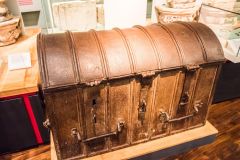 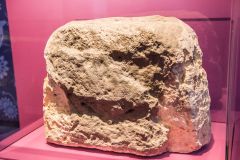 Nearest Accommodation to Museum of London:

More self catering near Museum of London

More Hotels near Museum of London

More bed and breakfasts near Museum of London