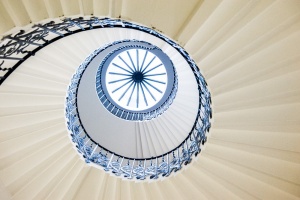 Palaces, residences, and other oddities associated with monarchs of Britain.

Banqueting House
Whitehall, SW1
Built by Inigo Jones for James I from 1619, it was the only major part of Whitehall palace to survive the fire of 1698. Contains a marvellous painted ceiling by Rubens.
Tube: Charing Cross, Embankment, Westminster

Buckingham Palace
The Mall, SW1
The London residence of the queen. Open for (pricey) tours of the State Rooms, including the Throne Room, from early August to early October. Details at www.royalcollection.org.uk. Tickets at the side entrance to the palace on Buckingham Palace Road. Info on Changing the Guard here.
Tube: St. James Park, Victoria

Royal Mews
Buckingham Palace Road, SW1
Just around the corner from the imposing facade of Buckingham Palace, the Mews is relatively quiet by comparison. It houses the royal vehicles, including carriages, horses, and equestrian gear. The 1910 Glass Coach is used for royal weddings, but the prize of the collection is the Gold State Coach (1762), used for coronations.
Tube: Victoria

Eltham Palace
Court Road, Eltham, SE9
One of the major Tudor palaces, Eltham has been badly damaged, and suffers from Art-Deco additions, but the Great Hall of 1480 is intact, with its remarkable hammer-beam roof. The modern additions are quite striking if Art-Deco is your cup of tea.
Rail: Eltham

Hampton Court Palace
East Molsey, Surrey, KT8
Begun by Cardinal Wolsey, who found it expedient to offer it to Henry VIII, this magnificent red-brick Tudor Palace is set in extensive formal and informal gardens beside the Thames. Visit the popular hedge maze, and the state apartments, with work by Christopher Wren and carvings by Grinling Gibbons. See if you can spot the ghost of Catherine Howard, Henry's fifth wife, who is said to haunt the palace.
Rail: Hampton Court (from Waterloo), or by waterbus from Westminster Pier, Richmond, or Kingston.

Kensington Palace
Kensington Gardens, W8
The royal residence here was redesigned by Christopher Wren for William and Mary in 1689. The State Apartments and the Court Dress Collection are open to the public, along with the sunken gardens. See the room where Queen Victoria was born, and paintings and furniture from the royal collection.
Tube: Queensway, Bayswater, High Street Kensington

St James Palace
St James Street
St James Palace began as an Augustinian hospital, and later served as a female leper hospital. Henry VIII bought it and built a hunting lodge here in 1532. Henry enclosed 300 acres of land to serve as a royal hunting preserve; that preserve is now St James Park. The palace was the official London residence of the monarch from 1698 until Buckingham Palace took that role in the 19th century. However, St James remains the official London royal palace.
Tube: Green Park

Tower of London
Tower Hill, EC3N 4AB
Here's history! Based around a fortress begun by William the Conqueror, the Tower of London has been home, refuge, and prison to British monarchs for over 1000 years. It is not a single structure but a myriad of historic buildings linked to each other to create a wonderfully jumbled complex centred on the White Tower. The Crown Jewels are displayed in a special exhibition area, and you can see where some of the most famous names in British history were kept prisoner, and in some cases, beheaded.
Tube: Tower Hill