The term "manor house" can be loosely applied to a whole range of buildings, but at its most basic refers to the house of a local lord/landowner. In strict architectural terms, a manor house is a late medieval country house. 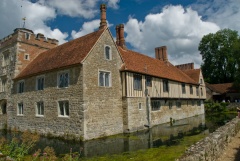 The medieval manor house has its architectural roots in the Saxon hall, a simple rectangular building which acted as a communal gathering place for eating, sleeping, and transacting business.

Servants and other retainers slept around an open fire in the centre of the hall, while the lord and his family occupied a raised dais at one end of the hall. This simple Saxon design was incorporated into early Norman castles, with the hall occupying the first floor of the castle keep.

By the 13th century, the fortified manor house emerged. Not quite castle, yet more advanced than the Saxon hall, these early fortified manors were built in brick or stone, with a timber roof. The fire was still open and the hall was still the abode of servants and retainers, but now a new room was added; the solar.

The solar was a private room for the lord and his family, usually on the first floor, and reached from the raised dais at one end of the hall. The space beneath the solar was often given over to storage.

At the other end of the hall from the solar was the kitchen area, usually separated from the main hall by wooden screens. Over time the kitchen became a totally separate room, often arranged at right angles to the main hall. The main entrance to the manor was at the kitchen end. A good example of this type of manor design can be seen at Stokesay, Shropshire. Window space was at a minimum in the fortified manor, and outer defences may have included a moat with a gatehouse reached by a drawbridge.

In the 14th century, the manor house more elaborate room additions appeared. The buttery, or food storage area, appeared between the kitchens and the main hall. Above the buttery was a guest room, further evidence of a growing awareness of, and interest in, personal privacy.

The simple entrance of the earlier century became a more elaborate porch, over which could appear a gallery for musicians. The various rooms; solar, hall, buttery, kitchen, had their own separate roofs, often at right angles to each other. Though the most desirable building material was still stone - for those who could afford it - bricks made an appearance, particularly in East Anglia.

By the early 15th century the fortified manor house had run its course. The more settled conditions of the period meant that defence was no longer the highest priority, and more time and energy was spent creating structures with comfort in mind.

The drawbridge gave way to a fixed bridge over the moat, and the gatehouse became more elaborately decorative; a grand entryway rather than a forbidding barrier. The upper floor of the gatehouse was often used as a chapel.

The house itself was most often arranged around a central courtyard, with domestic buildings of one to three stories in height. With more space devoted to comfort, private bedrooms and reception rooms became common, as well as family areas like the solar. Materials varied with the locale; half-timber, stone, brick, and flint were all used.

To generalise about the post-Medieval manor, it is safe to say that buildings became more spacious and elaborate, more ostentatious and ornate. The basic pattern of country houses evolved from the courtyard design to a more open E or H shape.

Windows occupied a large proportion of wall space; advances in glazing techniques account for part of this approach, but so did less need for defence. Another strain of influence was a burgeoning interest in classical design. More Englishmen were travelling abroad and they were influenced by Italian classicism, and still more by Flemish and French interpretations of that classical style. In this last ornate flowering of the medieval manor, we can see the origins of the neo-classical country house estates of the next several centuries.