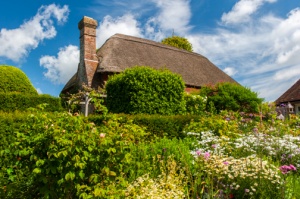 What is the difference between a manor and a castle or a stately home? Sometimes, very little. The addition of a simple window can tell us that the building was not meant to withstand a serious attack. The nice thing about manors is that they tend to feel a lot more homey than castles or grand country houses.

Alfriston Clergy House
The Tye, Alfriston, Polegate, East Sussex, off B2108, National Trust
Alfriston is best known as the very first property purchased by the National Trust. The simple hall house dates to the 14th century and has remained remarkably unchanged since it was constructed. The Clergy House is timber-framed and topped with a traditional thatched roof. The medieval hall is surrounded by a pretty cottage garden.

Baddesley Clinton
Rising Lane, Baddesley Clinton, Knowle, Solihull, Warwickshire, off A4141, National Trust
An almost perfect moated manor house, Baddesley Clinton is composed of a picturesque timber-framed house bounded by a 15th-century moat. The house is built around a lovely cobbled courtyard. The interiors date mainly from the Elizabethan period and feature no less than three priest's holes.

Baguley Hall
Wythenshawe, Greater Manchester
An early 14th-century timber-framed house, retaining its original arched doorways. The house features timber braces in the form of St. Andrew's crosses. Baguley is now a school and is not generally open to visitors.

Coughton Court
Near Alcester, Warwickshire, on A435, National Trust
This exquisite Tudor house has been the home of the Throckmorton family since 1409. The house is built around a timber-framed courtyard, and fronted by an imposing gatehouse. The Throckmortons were closely involved in the Gunpowder Plot, and the house features displays on the Plot and the dramatic aftermath at Coughton.

Donington-le-Heath Manor
1 m Coalville, Leicestershire, off A50
This small manor house dates to the 13th century, and has remained in exceptionally good condition. The most impressive feature is the great hall, which is very little changed since it was built.

Flatford Bridge Cottage
Flatford, 1 mile south of East Bergholt, Suffolk, on B1070, National Trust
Flatford is famous for its association with artist Thomas Gainsborough, who painted this stretch of Dedham Vale frequently. The thatched cottage was built in the 16th century. within the house is an exhibition on Gainsborough and the history of the house.

Gainsborough Old Hall
Parnell Street, Gainsborough, Lincolnshire
This beautiful timber-framed building was built around 1460. One of the best features is the medieval kitchen, which has been altered very little since it was created. Much of the west wing is devoted to a display on the families who lived here, and an exhibition on the restoration of the Hall.

Great Chalfield Manor
Great Chalfield, near Melksham, Wiltshire, off B3107, National Trust
A late 15th-century manor within a strong gatehouse, surrounded by a moat and stone wall. Interior features include a well-preserved Great hall, wonderful oriel windows, an ornately vaulted porch, and a decorated fireplace. Set high into the walls of the hall are a series of spy-holes.

Ightham Mote
Ivy Hatch, 6 m E Sevenoaks, Kent, National Trust
Arguably the finest moated manor house in England, Ightham dates to the first half of the 14th century. The centrepiece of the interior is the large Great hall, but there is also a chapel, drawing room, and crypt to explore. The architecture is a pleasing mix of timber-framing and stone.

Kentwell Hall
Off the A134 between Bury St Edmunds and Sudbury, Long Melford, Suffolk CO10 9BA, website
There are two superb manors in the Suffolk village of Long Melford. This is the first, built in the early 16th century by the Clopton family. Kentwell is set within a wide moat, and features very fine Tudor brickwork. The interiors have been restored, and include the original Tudor kitchen and a great hall with minstrel gallery. The gardens around the Hall are very extensive, and feature topiary hedges, a Tudor pavement maze, and a Camera Obscura.

Little Moreton Hall
Congleton, Cheshire, on A34, National Trust
Arguably the best-preserved timber-framed moated manor house in England (for alternatives see Ightham Mote and Stokesay). The Hall is set around a lovely cobbled courtyard, and the interiors feature an original long gallery and very good wall paintings. Little Moreton was used in the film adaptation of Moll Flanders.

Lower Brockhampton
Bromyard, Herefordshire, off A44,, National Trust
A wonderfully atmospheric moated 14th-century manor approached through a timber-framed gatehouse. Beside the manor is a ruined chapel, and there are extensive nature walks through the grounds.

Melford Hall
Long Melford, Sudbury, Suffolk, off A341, National Trust
The second of the two manors in Long Melford, Suffolk, Melford Hall is an Elizabethan house with a banqueting hall. The exterior has remained almost unaltered since 1578, but the interior has been remodelled in the Regency and Victorian periods.

Old Soar Manor
Plaxtol, Borough Green, Kent, off A25, National Trust
Only the solar block remains of this small 13th century knight's house. The setting is superb, down a narrow lane in idyllic countryside that seems to transport you back in time to the medieval period.

Oxburgh Hall
Oxborough, King's Lynn, Norfolk, National Trust
Home of the Bedingfeld family since 1482, Oxburgh is an idyllic moated manor house. The house is best known as the gilded prison of Mary, Queen of Scots, and you can still see embroidery made by the exiled queen during her captivity here.

Prebendal Manor
Nassington, Northamptonshire, website
Prebendal is the oldest manor in Northamptonshire, dating to the 13th century. In addition to the stone-built house, there are a pair of medieval fish-ponds and the possible remains of a timber hall belonging to King Canute.

Sheldon Manor
Chippenham, Wiltshire, SN14 0RG, website
Wiltshire's oldest inhabited manor house, Sheldon dates to at least the 13th century, though records indicate that there was a house here as early as the 9th century. The house is set in extensive gardens featuring ancient yew trees, with a late medieval chapel in the grounds.

Smithills Hall
1 m NE Bolton, Greater Manchester, off A58
This late 15th-century hall was built by the Radclyffe family and features a timber-framed great hall with striking quatrefoil wind braces on the roof.

Wingfield Manor
2 m W Alfreton, Derbyshire, off B5035
Wingfield was built by Ralph, Lord Cromwell, (see Tattershall), around 1441. Cromwell added the pair of carved money bags over the entrance as a reminder of his status as Chancellor of England. The great hall of Wingfield is now ruined, but the undercroft is well worth a visit.

Speke Hall
The Walk, Liverpool, 1 m off A561, National Trust
A marvel of late medieval timber-framing, Speke features a Tudor great hall and several priest's holes, in addition to later Jacobean and Victorian decoration. There are extensive gardens and woodland walks through the grounds. The house is very close to Liverpool airport.

Stokesay
Craven Arms, 7 miles north of Ludlow, Shropshire, on the A49
This fabulous manor combines a fortified castle tower with a later timber-framed gatehouse and great hall. Stokesay was begun in 1280 by Lawrence of Ludlow, a wealthy wool merchant. The Great Hall features three very large windows set in the exterior wall, making it obvious that even this close to the Welsh border, Lawrence felt safe enough (or lucky enough!) to emphasize comfort over security.

Stoneacre
Otham, Maidstone, Kent, off A20, National Trust
Stoneacre is a late 15th-century timber-framed house with a great hall. A restored cottage garden surrounds the house, which was built for a prosperous yeoman..

Tattershall Castle
Tattershall, Lincoln, Lincolnshire, on A153, National Trust
One of the first major buildings in England to be made of brick, Tattershall was begun around 1440 by Ralph, Lord Cromwell (see Wingfield Manor). There are four large chambers featuring several Gothic fireplaces. A climb to the top is rewarded with fantastic views.

Woolsthorpe Manor
23 Newton Way, Woolsthorpe-by-Colsterworth, near Grantham, Lincolnshire, off A1, National Trust
This unpretentious 17th-century manor was the birthplace of Sir Isaac Newton. Newton returned to Woolsthorpe when the Great Plague hit London in 1665, and it was here that he wrote several of his most famous works. In the orchard across from the manor is a descendant of THE apple tree where Newton had his epiphany on gravity (mind your head!). 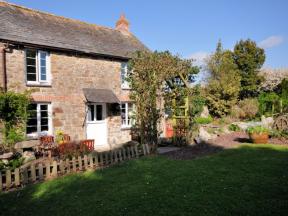 The cottage is approached via a long private driveway which allows guests to feel as if they are truly getting away from it all. However many of Cornwall s attractions …
Sleeps 5 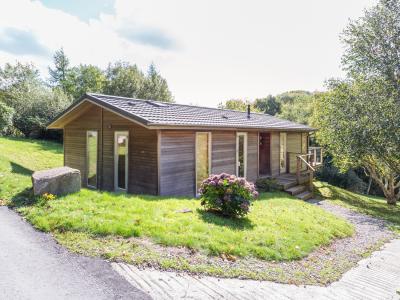 This lodge is based in Lanreath, Cornwall and can sleep four people in two bedrooms.
Sleeps 4