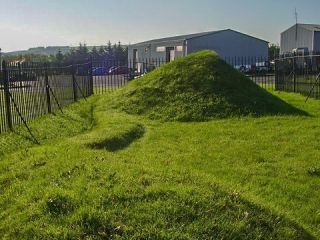 Grain Earth-House
Grain Earth House is not a house, but a long underground passage leading to a large chamber. It was probably used as a cold storage area, and possibly as a refuge in times of trouble.
There are several similar Iron Age sites on Orkney, including one quite close at Rennibister. The earth house at Grain was built around 400 BC and has a passage running 5 metres (about 16 feet) to an elongated oval chamber 3 metres in length (about 10 feet).

The roof of this inner chamber is supported on several upright stones acting as pillars. The roof of the passage and the chamber is built from large, flat slabs of stone.

First discovered in 1827, the site was excavated by a pair of enthusiastic antiquarians in 1857, and is said to have been empty, however, the area above ground level contained domestic refuse, and several ancient walls, but there are no traces of this now. A recent investigation revealed the presence of a second earth house about 20 feet away, with traces of an Iron Age building above it, suggesting that there was a settlement at Grain and the two sites are related.

The site is rather lost in the middle of an industrial estate, and isn't immediately obvious - look for a low green mound near the road junction.

Nearby accommodation is calculated 'as the crow flies' from Grain Earth-House. 'Nearest' may involve a long drive up and down glens or, if you are near the coast, may include a ferry ride! Please check the property map to make sure the location is right for you.

More self catering near Grain Earth-House >>