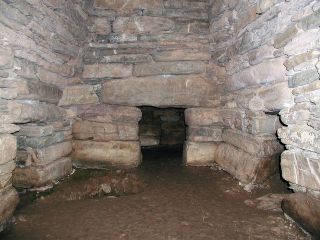 Quoyness Chambered Cairn
Quoyness is a good example of a Neolithic chambered tomb, built around 3000 BC. The tomb stands in a ritual landscape, near another chambered tomb and several smaller Bronze Age burial cairns.
Quoyness is typical of the Orkney chambered tombs, with a long passage leading to a central chamber and small cells opening off the chamber. The passage is 9 metres long (about 28 feet), and brings you to a 13-foot high central chamber. Only half the entrance passage is roofed, but this is a modern attempt to show visitors how the cairn was built. The original passage would have been roofed along its entire length.

As well as human bones the remains of animal bones, pottery, and tools made of bone and stone were found.

One point that archaeologists have noted is how closely the chambered tomb resembles the stone village at Skara Brae, on Orkney Mainland. Like Skara Brae, there is a passage leading to stone-lined chambers. Perhaps the Neolithic builders wanted their tombs to closely resemble their normal dwellings.

The Elsness peninsula may have been an island in the Neolithic period, separate from the mainland of Sanday. That might explain why it seems to have been set aside as a ceremonial centre, a special place for burials. The site appears to have been used for burials from at least 2900 BC through the 2nd millennium BC.

Quoyness is on the southern tip of Elsness, 2.5 miles from Kettlehoft. To reach Sanday you have to take the ferry from Kirkwall.

Nearby accommodation is calculated 'as the crow flies' from Quoyness Chambered Cairn. 'Nearest' may involve a long drive up and down glens or, if you are near the coast, may include a ferry ride! Please check the property map to make sure the location is right for you.